We've been singing the praises of B&O American Brasserie since it opened some years ago. Although several chefs have worked in the kitchen during that time, each has brought his own unique stamp to the restaurant's menu, and the bar offers some of the most inventive cocktails in town. The current executive chef, Michael Ransom, and his sous chef, Scott Hines, are working some especially exciting magic in the kitchen these days, so we were thrilled to get a chance to try out some of their new spring menu items.

Before our meal, we ordered cocktails from the Paris in Springtime section of the drinks menu. Mixologist Brendan Dorr and his team have come up with some exotic libations this season. I chose The Bay of Bengal which contains Lustau Fino Sherry, Dolin dry vermouth, and chamomille grappa liqueur. The concoction is light and slightly sweet while retaining the body of sherry. Although the drink was put on the menu weeks before the untimely passing of Prince, the Minx thought it appropriate to try the Purple Rain. With lavender-infused Novo Coco Cachaca, lemon, and honey apple shrub, this tasty drink packs quite a wallop. It was probably best that we had appetizers coming to absorb the alcohol. 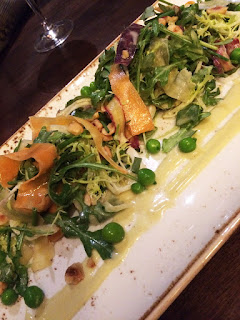 One thing about Chef Ransom's menus is that his descriptions sound rather straightforward, but the dishes actually turn out to be quite nuanced and complex. Case in point is the Spring Mixed Greens salad. Shaved new carrot, fresh English peas, frisée, and soft herbs (like tarragon) seems pretty Spring-like but almost...ordinary. But consider that the buttermilk dressing is flavored with cumin, and a smattering of roasted hazelnuts add a nutty buttery-ness as well as an extra textural component, and you have something much more special. 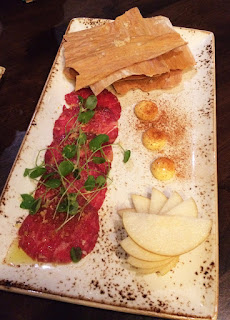 The luxurious Wagyu beef ribeye carpaccio is sliced super thin. It's so meltingly tender, that someone not completely into the idea of eating raw meat could be swayed into trying it (and liking it). The meat is paired with parchment-thin crackly-textured house crackers that are formed by running the dough through a pasta maker. The dish's other accompaniments include shaved egg yolk and kewpie mayonnaise to add still more richness, which one can cut with bites of crisp and lightly sweet apple pear. Horseradish, watercress, and harissa add bits of pungency and spice to the dish. As you work your way around the plate, the flavors and textures provide a perfect balance. 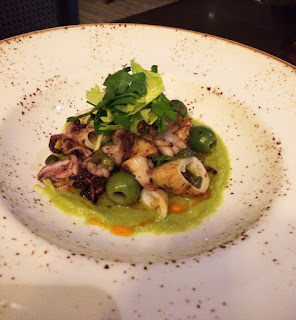 The third appetizer we tried was grilled calamari with Castelvetrano olives, capers, and roasted tomato. We're so happy that chefs are taking to cooking calamari in ways other than the usual favorite deep fry method. Chef Ransom's squid is meltingly tender, with tiny hints of char here and there that add both flavor and texture. Still more flavor comes from a drizzle of fat from Spanish chorizo oi, some frizzled finocchiona (a fennel salami) and a celery-forward herb salad on top.

Lighter eaters could make a very nice meal with the calamari and a salad. 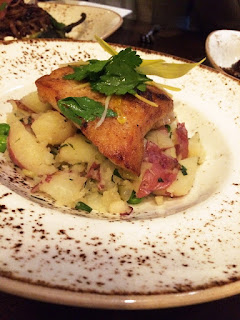 English peas and tarragon, favorite ingredients of mine and also of the Minx, also made appearances in the Spring version of the market fish dish. We were served fluke (a mild white flatfish, like flounder), served with a warm potato salad dotted with the bright green of fresh English peas and flavored with tarragon, garnished with the intensely corn-flavored shoots from young corn plants. The fish was perfectly golden and lightly crisp and the potato salad and peas had a bright flavor. Well suited for those looking for an entree that's filling yet not too heavy. 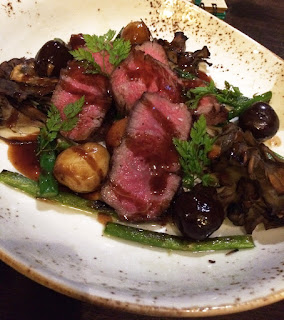 The center-cut New York strip is one of the heartier entrees available. You might think, "a steak is a steak," but at the B&O, it's not your typical slab of meat with a side of sweet steak sauce and a baked potato. Instead, the steak comes pre-sliced, a gorgeous, well-rested medium-rare, and accompanied by asparagus, roasted maitake mushrooms, and baby potatoes cooked in duck fat. Instead of steak sauce, a rich Bordelaise sauce (imagine the best beefy gravy you can think of, steeped with the rich flavor of porcini mushrooms) is drizzled over the dish table-side. Just as everything is better with bacon, everything savory is better when it's cooked in duck fat, and the potatoes proved that rule. The Minx loved the earthy maitake mushrooms. 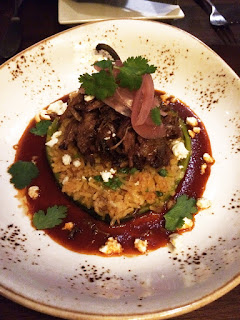 Lamb shoulder is not a protein you would normally associate with a chile relleno, but in this preparation, it works perfectly. The meat is smoked and braised, then shredded and placed on a bed of dirty rice that is nestled in a roasted poblano pepper. The whole thing floats on a pond of ancho chili barbecue sauce, which is everything you want a good barbecue sauce to be: acidic, spicy, and lightly sweet. So delicious that you could slather it on the chair and make it taste good. And if that's not enough flavor for you, a sprinkling of fresh cilantro and French feta (instead of queso fresco), plus a garnish of pickled red onion puts it over the top.

Lamb haters should just shaddup and try it. While we think the carpaccio dish could be a great gateway for those who are squeamish about raw beef. this relleno could be a terrific way to introduce non-lamb eaters to the tasty qualities of this meat. It's as tender as the best pot roast, and not at all gamy. 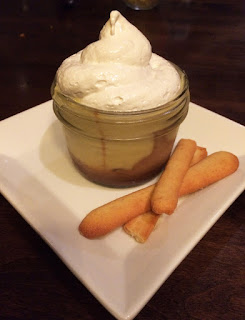 The Minx and I usually do not order dessert, but we are also open to persuasion and Chef Ransom made a compelling argument (as in "We have dessert!"). The Minx chose the banana pudding which came with a non-traditional gooey marshmallow topping and salted caramel on the bottom. The caramel had that slightly burnt quality that I like and the marshmallow reminded me of the topping at snowball stands. The accompanying cookies were meant to mimic Nilla wafers, but they were much better. 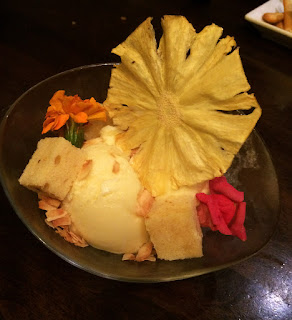 I opted for the Pina Colada Sundae with a toasted coconut ice cream, pound cake, and a dehydrated pineapple slice. The ice cream was light, closer to an ice milk, and the toasted coconut had a nice crispness. The pineapple slice had all the flavor of pineapple compressed into a light, crisp wafer. Even the pound cake seemed light. Overall, it was a refreshing end to the meal without weighing me down.

I always look forward to going to B&O American Brasserie and I've never been disappointed. All I can do is paraphrase an old saying, "Just go and God bless America(n Brasserie)!"