Flashback Friday - Everybody Goes to Ginos....

Our first visit to the new Gino's really pissed me off. Thankfully, they have improved a great deal, both service- and food-wise, and we eat there regularly. Well, not regularly, because there's more to life than hamburgers, but once every couple months. That's regular for us.

...and I think they were all there on the same evening we decided to try out the brand-spankin' new Gino's in Towson. Not only were they all there, but they all got their food before we did.

We thought we were smart, getting to the restaurant at 4:30pm. There was no line, and there seemed to be open tables both inside and outside, so we figured we were golden. Wrong-o. After placing our order for two Gino's Giants, one with fries and one with onion rings, plus two fountain drinks, we were given two plastic cups, a plastic card with the number "1" on it, and a receipt noting the time of 4:35pm.

4:36pm: We fill our cups with fountain beverages and grab two seats at a short counter near the side entrance. The plastic "1" went into the metal ring atop the condiment caddy to alert a server to our presence when he or she brings out our food. The restaurant is pretty full and includes almost as many people waiting for carry-out as sitting at tables. Most of the seated people already have food, so I'm pretty confident that we'll have a short wait. I'm expecting 20 minutes.

4:42pm: My chair is jostled by some fatass with a balance issue. There's definitely enough room to move past me.

4:50pm: Food seems to be coming out at a decent clip, so I'm sure that we'll get our food soon.

5:01pm: At this point, I start to wonder if offering an amuse bouche might not be a good idea, just a little something to appease those of us waiting for a while. At a fine dining establishment, we would have been done with the appetizers and waiting for our main courses by now. (Of course, were we at Alchemy, our main courses would be on the table already, too.)

5:05pm: Hey! That couple came in after we did, and they just got their food! Grr.

5:08pm: My chair is jostled again, by a server taking food to another table. Grrr.

5:10pm: That trio definitely came in after we did - and they're eating! Grrrr.

5:12pm: I notice that the line for ordering food is out the door. There should be a sign out front like the ones posted near roller coasters, "one hour wait from this point." Better yet, "Abandon hope, all ye who enter here."

5:13pm: A lone woman diner, sitting at a table behind us, manages to get the attention of a staff member to complain that she had been waiting since 4:29pm and still has not received her food. She also kindly points us out as coming in right after her and being in the same boat.

5:15pm: A server offers us a coupon for a free shake on a future visit. I think, "fat chance of that."

5:16pm: Another server comes over to check our receipt. Apparently our order disappeared and they need to know what food we paid for.

5:20pm: My chair is jostled for what must be the fifth time by a vertically-challenged busser who can't seem to be able to lift the plastic bucket of soiled napkins and food baskets high enough to avoid whacking me with it. At this point, I'm almost annoyed enough to whack her back.

5:26pm: Our food arrives. At this point, both parties that arrived after us but who were served 15 minutes earlier have finished eating and left the building. 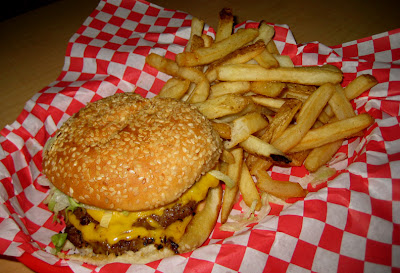 After fifty minutes of sitting in a restaurant redolent of beef and fried potatoes, we are ravenous. After a couple of bites of both fries and burger, Mr Minx turns to me and asks, "Salty?" Yes, I have to agree - both items had been aggressively seasoned. The onion rings, on the other hand, were perfect, and just the way I like them: cut into extremely thin slices and fried to a deep golden brown. They come with a little tub of sauce that tastes a bit like a Sriracha mayonnaise, but not as interesting. It was a little too spicy for the rings, but it works with the fries. The fries are merely ok, a little hard, and of course, salty. Our sandwiches - two well-done patties topped with American cheese, dill pickle slices, lettuce, and Gino's "secret sauce," on a squishy sesame seed bun - sadly arouse no feelings of nostalgia in either of us. Not that they aren't good - apart from the surfeit of salt and pepper, they are tasty, with a good ratio of toppings to burger, and just enough sauce to drip out onto our fries but not cause the bun to disintegrate or the meat to slide out - they just taste like fast-casual burgers. Not like Gino's burgers. 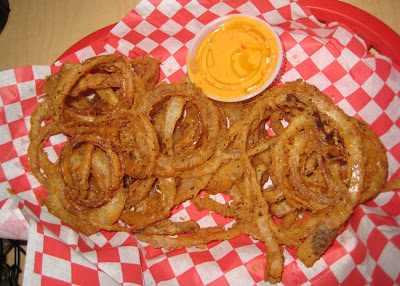 Granted, it's been at least 30 years since I've had a Gino's Giant. There was a Gino's down the road from Catholic High, on Edison Highway, and occasionally a few of us would hike down there after school to grab a burger before heading home. I remember liking Gino's much more than McDonald's. The burgers seemed tastier - possibly because of the Baltimore Colts connection - and they sold Kentucky Fried Chicken back then, too.

Today's Gino's is more like a Five Guys, except with a crappy system. In my experience, at Five Guys, one places an order at a counter at one end of the store, then goes to wait at a separate counter on the other side, or at a table. Folks who are ordering and those who are waiting do not mingle. At Gino's, the restaurant is set up like a more traditional fast food joint, with ordering and pickups done at a long counter at the back of the restaurant. Unlike a fast food restaurant, however, a customer does not immediately receive a pre-made burger and fries slapped onto a tray or placed in a paper bag, quick-and-dirty service allowing the customer to get out of the way of the next patron in line. Instead, like at Five Guys, Gino's patrons have to wait for their food to be cooked to order. Those who choose to eat in can take a table, but those waiting for carry-out orders sit and stand near the counter, some getting in the way of customers who attempt to avail themselves of self-serve fountain beverages.

While getting a piping hot burger that spent no time languishing under a heat lamp is a good thing, having to wait nearly an hour (in our case) is not. The problem seems to be the order numbering system. At other restaurants, one gets a receipt with a number printed on it. The receipts come out of the computer in numerical order, so it's pretty easy for someone making food to know the sequence in which the orders were placed, and thus, the order in which they should be filled. At Gino's the numbers are completely random. Our number was "1." The number of the couple in front of us was "31." The woman who came in at 4:29pm had the number "54." The trio who were in line behind us received "100." And "100" received their food before both "54" and "1."

6:30pm: Editing post which has become a rant about more service not equalling better service. (Ok, so I didn't edit out too much.) All I'm gonna say is...table service is a dumb idea. Patrons are perfectly capable of listening for when their number is called, getting their fat asses up from a chair, and retrieving their meal at the counter. Instead, servers who do not know exactly where their particular customer is sitting are often forced to circumnavigate the entire dining room AND check outside before finding their quarry. The high backs on some of the booths getting in the way of a server's line of sight don't help things one bit.

Initially, I was quite happy to see that Gino's was making a comeback. That quickly turned to disappointment when I realized the only thing that the new restaurant had in common with the original was the font used in the logo.

My recommendation to folks who are still eager to try Gino's, even after reading this, is to wait a couple of months so the crowds die down a bit. Maybe the table service doesn't seem like such a dumb idea when the restaurant isn't lousy with patrons. I think I'll schedule my next visit for sometime in 2012. By that time, the new Perry Hall location should be open, and they'll get the crowds, leaving Towson a quieter place.

6:45pm: Find a giant chunk of black pepper stuck in back molar.