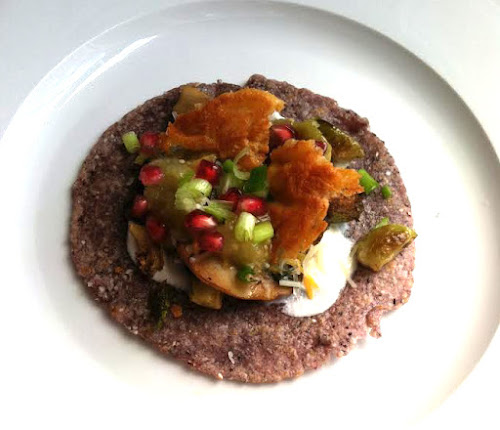 Our recent trip to New York introduced me to a new meat substitute--brussels sprouts. Ok, not exactly a meat substitute in the same vein as tofu, tempeh, or seitan, but a surprisingly filling stand-in for animal-based protein. There were all sorts of delicious options on the menu at Empellon Taqueria, but the brussels sprouts tacos caught my eye. Served with toasted almonds and an almendrado (an almond-based mole), the tiny cabbages were almost meaty in texture. I decided I needed to try something like that at home.

There are multiple recipes for sauces called "almendrado," one of which is a dessert custard. The others contained everything from chocolate to plantains to raisins to, er, hazelnuts, so rather than attempt to recreate what I had eaten in NY, I just struck out on my own. Basically I messed around with what I had and came up with something delicious.

We didn't have corn tortillas on hand, so I made some. I wanted to make blue corn tortillas and found a recipe that used both blue cornmeal and all-purpose flour in place of the typical masa. The result had far more texture than a masa tortilla, due to the graininess of the cornmeal, but they worked really well with the filling, so the recipe is included here. Otherwise, if you want to make your own standard masa tortillas, you can use this recipe from an older blog post.

I had tomatillos, so made a salsa. As for a cheese element, I did something completely different. Wanting to add a crunchy aspect to the tacos, I fried the cheese into crisps. Parm works the best for this sort of thing, but a moister cheese like cheddar or jack works too, you just have to watch carefully so they don't burn.

These babies were hearty, meaty, crispy, creamy, and tangy. Everything I want in a taco.

Trim the sprouts. If they are on the large size (bigger than a quarter), then cut them into quarters. If they are small (dime or penny size), leave them whole. Put them on a foil-lined baking sheet with a drizzle of olive oil and some salt. Roast for 20-30 minutes, until tender-crisp and browning/charring in spots. Remove from the oven and set aside.

Heat a skillet over medium-high heat and add the butter. When it melts, add the mushrooms and cook until nicely browned on both sides. Add the roasted brussels sprouts and toss to coat. Season with salt and pepper to taste.

Heat a non-stick pan over medium-high heat. Sprinkle about a tablespoon of the shredded cheese into a thin circular shape in the hot pan. It will bubble and melt. When the edges start to brown, try to loosen it from the pan with a spatula. Once it loosens easily, flip the cheese to cook the other side. Watch carefully so the cheese round does not burn. When done, transfer to a paper towel-lined plate to drain. Repeat with the remaining cheese. Allow cheese to cool, then break up into shards.

Top each tortilla with a smear of sour cream. Add some of the sprout/mushroom mixture and a dollop of tomatillo salsa. Garnish with pieces of fried cheese, scallion, and pomegranate.

Combine flour, cornmeal, and oil in a bowl. Gradually add the water and salt. Knead dough just until smooth. You might not need all of the water; the texture of the dough should not be sticky.

Divide into twelve equally sized pieces and roll each into a ball. Flatten each ball slightly and place on a plate. Cover with a piece of plastic wrap and allow to rest at least 30 minutes.

Roll out each ball into a 6" round, using a rolling pin or tortilla press. Cook each in a hot, ungreased, skillet for about 45 seconds per side. Stack tortillas as they come out of the pan to keep them pliable. Serve warm or room temperature.

Put tomatillos, jalapenos, scallions, cilantro, and garlic into a blender and puree. Pour into a saucepan and bring to a boil. Stir in the brown sugar, cumin, and salt. Cook about 5 minutes, until mixture darkens. Taste for seasoning, adding more sugar or salt if you think it needs it. It should be tart, but not sour.