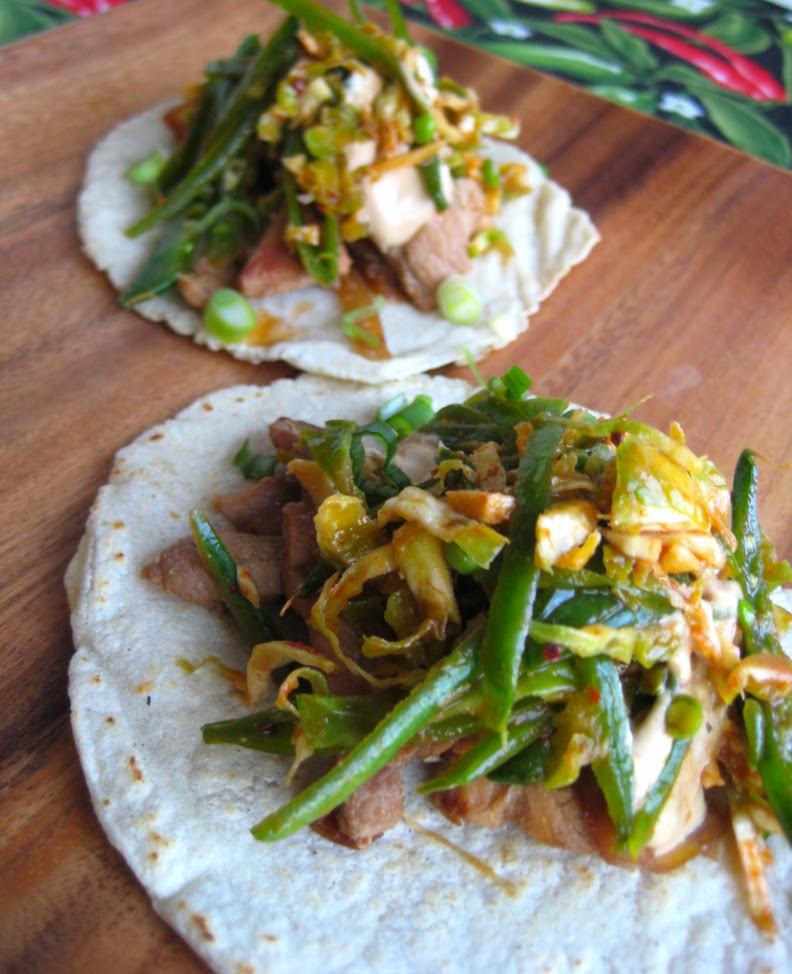 I bought a bag of masa flour some time ago, intending to make all manner of yummy Latino foods. What I really wanted to make was corn tortillas, but I didn't have a tortilla press and didn't trust my ability to make perfectly thin and even tortillas without one. I found an inexpensive tortilla press on Amazon and put it on my wish list, but Christmas came and went without it.

So I purchased it for myself. Sheesh, what a gal's gotta do sometimes to keep a food blog going.

One evening, I had no dinner ideas (it happens more often than one might think). We had a fridge full of sundry leftovers and raw veggies and I figured it might be a good time to break out the tortilla press. Hey, pretty much anything can be turned into a taco, as long as there's a protein, a sauce, and a salsa or slaw. (My kitchen, my rule!) The raw veggies were brussels sprouts and sugar snap peas, so I turned them into a kimchi-style slaw. There was leftover pork tenderloin, which became the protein, and a bit of peanut sauce left from making a vegan pizza that I mixed with plain yogurt to make a creamy sauce.

Now I just needed to make the tortillas. And they were a snap. As long as there's a bag of masa in the house, I'll never have to buy corn tortillas again. The dough involves only two ingredients--water and masa flour--and cooking them is a fairly quick process. Homemade tortillas are more tender and more corny-flavored than commercial ones, and if you only make as many as you need, you don't have to worry about a gigundo pack of tortillas getting moldy in your fridge (ugh).

Kimchi
This is just a guideline...and this isn't real kimchi. I'm not Korean so don't go crazy on me.

Trim and slice thinly a pound or so of Brussels sprouts and/or other veg (cabbage, sugar snap peas, bok choy).

In a small bowl, mix 1 or 2 cloves crushed garlic, 1 tablespoon Korean pepper flakes, a couple of squirts of fish sauce, a tablespoon or two of white vinegar, salt, four chopped scallions, a teaspoon or so of sugar, 1/2 teaspoon of ground ginger, and a teaspoon of toasted sesame oil. If you have sesame seeds, toast about a tablespoonful in a hot skillet and add to the salad. Mix into veg and taste for seasoning, adding more fish sauce, sugar, salt, vinegar until it tastes balanced to your palate. (After all, you're going to eat it. We're not going after authenticity here.) Cover and refrigerate for at least a couple hours so the brussels sprouts have time to tenderize a bit and the flavors can do their thang.

Put the masa in the bowl of a stand mixer. Add the half cup of water and turn the mixer on to medium power. If the dough just looks like crumbs, add the additional water a tablespoon at a time until the dough forms a ball and completely comes away from the sides of the bowl. The texture of the dough should be like non-sticky cookie dough. If it's sticky, add a little more masa. If it's still crumbly, add a bit more water.

Remove the prepared dough from the mixer bowl and form into 8 balls. Cover with plastic wrap and refrigerate until ready to use, but not more than an hour or so.

When ready to cook: heat a cast iron pan or other heavy skillet so a drop of water dances across the surface (crazy hot).

Cut down the sides of a small zip-top plastic bag so it's only connected at the bottom edge. Put one half of the bag down onto your tortilla press. Put a ball of dough on the press, cover with the other side of the bag, and close the press. Open the press...if the tortilla isn't big/thin enough, squeeze again.

Transfer the tortilla from the bag to your right hand (left, if you're left-handed). Slap the tortilla onto the hot pan, making sure not to touch the pan with your hand (the tortilla should fall off your hand before it gets too close). Cook for a minute or so on one side, then use a spatula to flip the tortilla. Cook for another minute. Flip again, then press down on the tortilla with the flat side of the spatula, making it puff up. Flip and press again. After the tortilla has puffed on both sides, transfer it to a plate and cover with a piece of foil, to keep it warm.