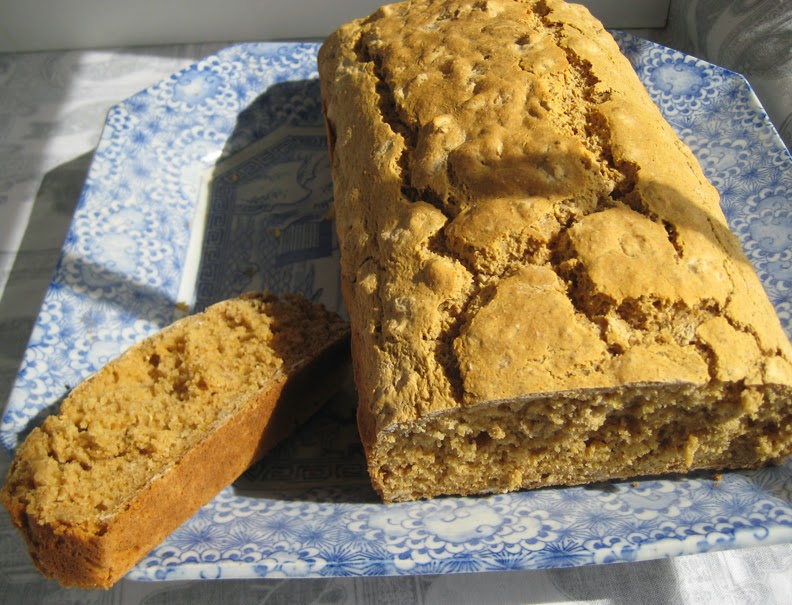 During this excruciatingly long winter, the Minx and I have been looking for any excuse to bake. Turning the oven on adds a little extra heat to the house and the resulting concoctions warm our bellies, so it's a win/win. The other day, Minx was flipping through cookbooks looking for some baking recipe that would spark her interest. Nothing seemed to strike her fancy, but one recipe she mentioned sounded intriguing to me: quick beer bread from The Joy of Cooking. The thought of a hearty, dense bread flavored with beer sounded like a great accompaniment to a soup or some other winter time meal. Also, it would give me a new way to use my brother's red ale other than just drinking it.

The recipe is wonderfully simple: combine the dry ingredients with the beer until everything is thoroughly mixed, then pour the batter into a greased loaf pan and bake for 40 minutes in a 400 degree oven. The crust is crunchy and the interior is dense and moist. The beer adds a nice yeasty flavor. The recipe calls for two tablespoons of sugar, but I left that out because I wanted a savory bread.

The bread came in handy one night when we were at the supermarket with no idea what to have for dinner. We decided to buy some Italian cold cuts and take them home. We ate the bread and cold cuts with cheeses and pickles. A simple, no-fuss dinner that was satisfying for a cold night. And it worked for breakfast, too, as Minx took a slice to work with her the next day.