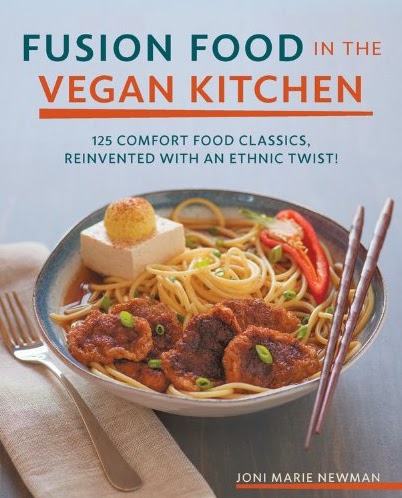 I was sent a review copy of Fusion Food in the Vegan Kitchen: 125 Comfort Food Classics, Reinvented with an Ethnic Twist! by Joni Marie Newman some weeks ago and didn't get around to cooking anything from it until now. There were just too many interesting choices, and I couldn't make up my mind as to which recipes to try.

I'm a fan of fusion cooking--taking elements from different cuisines and mixing them in one dish--and have been doing it for years. The way I think about it, seemingly disparate cuisines have similarities: Italian ravioli and spaghetti and Chinese dumplings and lo mein; Slavic rice-stuffed cabbage and Greek rice-stuffed grape leaves; the spicy cumin and coriander flavors of both Mexican and Indian foods. To me, Newman's fusion concoctions make sense. And while I'm not a vegan, I'm not adverse to experimentation. In this case, it's easy--there are many cultures that don't consume the vast quantity of animal-based products that we do in the US. Combine two or three of them, and there's enough good stuff going on without adding meat.

Take, for example, Newman's recipe for Korean Barbecue Satay, which mixes elements from Korea (the sauce) and Indonesia (the technique). The sauce is flavorful enough to give slabs of skewered tofu a nice kick in the pants. The recipe for El Paso Egg Rolls stuffed with black beans, corn, and avocado will be familiar to anyone who's eaten a similar dish at Chili's or Cheesecake Factory. There are so many things going on in it, so many textures and flavors, that nobody will miss the meat or cheese.

In that vein, we tried a recipe for pizza, something usually found topped with both meat and cheese. Newman's version involves a crisp crust, a Thai-style peanut sauce, and a salad of cabbage and sliced fennel. We didn't have cabbage on hand, but we did have sugar snap peas and asparagus, so I substituted. The combination of crisp and fresh with the contrast of creamy peanut sauce was really stupendous. I can see myself making this recipe over and over, using whatever vegetables that are on hand. 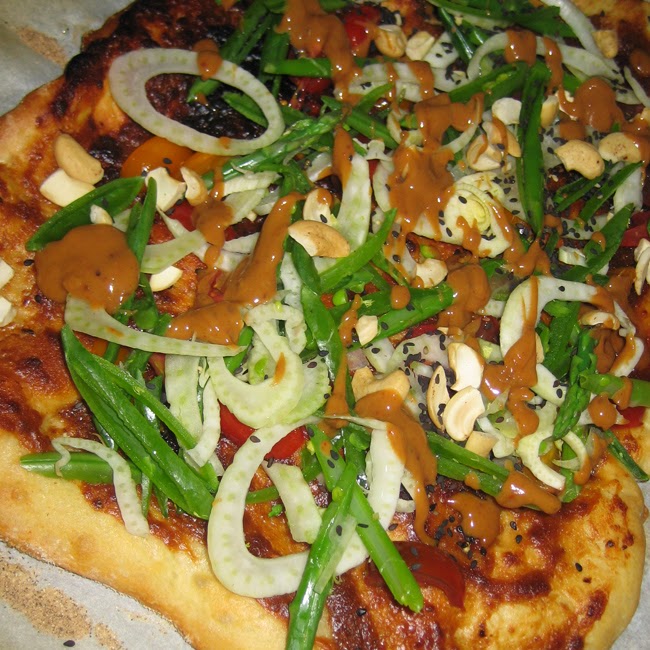 The dish was even visually beautiful, the proverbial feast for the eyes.

I also appreciate that Newman gets creative with her meat substitutes. There are recipes that involve tofu and tempeh, but also jackfruit, which has a stringy/meaty texture that simulates pulled pork. And several recipes involve home-made "wheat meat" or seitan, a simple technique that involves vital wheat gluten, an ingredient found in any supermarket (it's also used for baking bread).

Overall, Fusion Food in the Vegan Kitchen is a lovely book with a good solid concept, well-thought-out recipes, and photos for most dishes. There are even recipes for desserts and libations. I recommend it for vegans and meat-eaters alike.