We're coming down to the wire here, folks...there's only one more episode after this one, and I can't be more pleased. Ok, I'd be more pleased if this week's episode were the final episode. I used to like this show, but back when it seemed to be an actual cooking competition between somewhat inept celebrities. Now it seems more like a contest to determine who can best follow Rachael's or Guy's instructions. Bah. 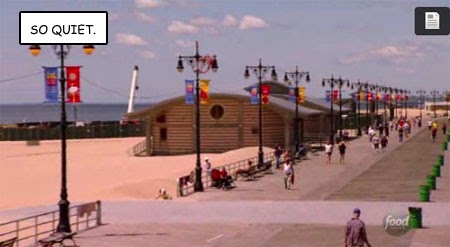 This week, the celebs are in Coney Island. The weather looks magnificent, but there is a surprising dearth of non-Food Network persons wandering around the boardwalk. I can't believe that the network has such clout they can clear a town for their use. Or maybe Coney Island is in a serious, serious slump.

Anyhoo...there are two challenges again this week, one of which involves running a hot dog cart. 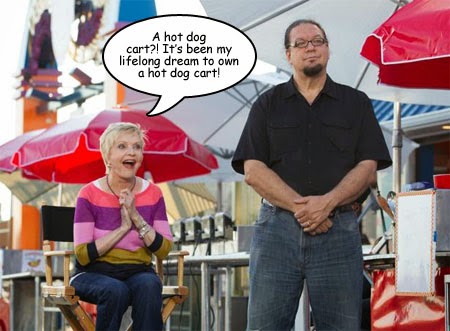 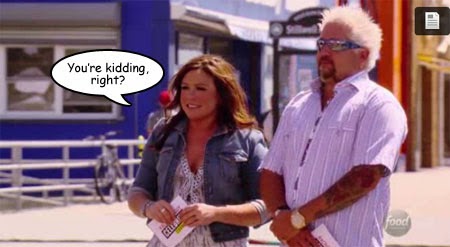 Florence Henderson says this has been a dream of hers, and it's hard to tell whether she's telling the truth or if the pain killers that she's taking for her broken foot are a little on the strong side. Perhaps life after the Brady Bunch and Wessonality has been a bit slow. But first, before the celebs get to serve up delectable meaty treats that have been floating in a tank of greasy water, there's a french fry challenge, the winner of which gets an extra ten minutes for hot doggery.

The teams head to their respective big-ass trailers, which seem even more over-sized and unnecessary when one considers that Team Rachael only has two players. Penn Jillette thinks he might make disco fries, which are french fries covered with cheese and gravy. Sounds like a sog-fest to me. Rachael wants Penn to amp up the fries by making French onion gravy. She also gives this sound advice: "don't over-cheese, don't under-cheese."

Florence wants to make "everything bagel" fries, coated with garlic, onion, poppy seeds, etc. Rachael is down with that.

Over to Trailer Guy. Herschel mutters something about "Famous 34 Gravy Fries." Vanilla Ice will make "Buffalo-style Ninja sticks." Apparently Buffalo, New York is rife with ninjas. Who knew? He also does a little rhyme, "gonna open your eyes and give you a surprise." By this, I assume he means that they'll be so spicy, diners will have some painful eliminations afterward. 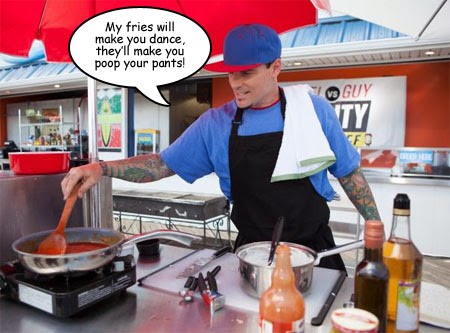 Tiffany wants to represent Noo York by making Italian fries topped with cold cuts and whatnot. She's calling them "Yo, Yo, Yo" fries. Does that seem somewhat inappropriate to you, too?

The celebs don't have to cut the fries, they only have to cook the Ore-Ida crinkle cuts provided to them and top them with the slop of their choosing. Flo's having a problem getting her topping to stick to her fries, and Rachael makes her start over. Tiffany is having "meat issues," because she wasn't provided with the pro-SHOOT she wanted. Instead, she cooks up some hot Italian sausage, which, personally, I think would work better. Herschel decides to top his fries with a fried egg, but he ends up mangling and overcooking the poor thing. 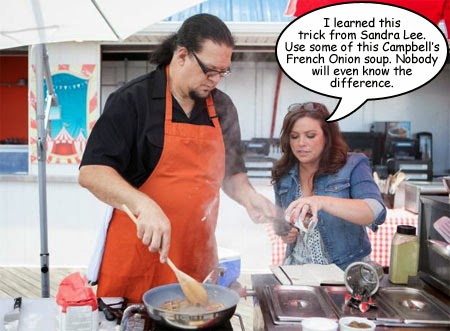 Amanda Freitag is the Special Guest Celebrity Chef Judge this week. I watch her hug Guy and I think to myself, "he must stink." Cheap cologne or sweat, either or both. They judge the fries. Vanilla Ice's "ninja" fries are too spicy. Herschel's egg should be runny. Penn's has too much Swiss cheese (he over-cheesed). Flo's are clever and delicious, but the toppings are still falling off. This leaves Tiffany, whose fries are tasty enough to get her the win, and an extra 10 minutes in the wienerfest.

She's calling her dog a "Jamaican Hottie," which I suppose is better than her original name, "Ganja Dog." She's wrapping her tube steak in bacon, and making a pineapple and mango salsa to top it. None of that sounds Jamaican, particularly the bacon. But it's got Jerk seasoning, so of course it's authentic! In any case, Tiffany uses her extra ten minutes to make the salsa, while the other celebs champ at the bit to get started.

Flo wants to make a Kosher deli dog in honor of her friend Judy Gold. (The everything bagel fries may well have been in her honor as well). She's rolling her pups in yellow mustard and pastrami before topping them with slaw and home-made Russian dressing. I want one.

Herschel is making an "All-American" dog, topping his with a baseball, apple pies, and a tiny Chevrolet.

Penn is doing what he calls a New England breakfast with a carny trash touch: a bacon-wrapped pancake-battered dog on a stick with a side of maple syrup. Rachael wants him to taste the dog without the syrup, to get an idea of how well his batter is working. She thinks it needs salt, despite the bacon. Penn's not budging; he wants the dog to be dipped into the syrup, not eaten dry. When Rachael tries this, she's happy, and Penn feels vindicated. Carny trash know their corn dogs! 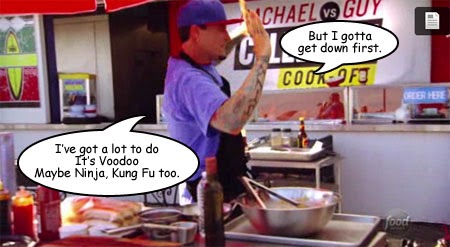 Vanilla Ice is vegetarian, and mercifully he's not going to inflict commercial tofu hot dogs on the unsuspecting crowds. Have you ever tried one of those things? They taste like smoked band-aids. Instead, he's taking logs of tofu, wrapping them in egg roll skins, and giving them a quick deep fry. And they are as bland as shit. As has become customary, Guy makes him throw out his first batch and try again. Despite their blandness, Vanilla is calling them his "crispy kung fu veggie dawgs." What happened to Ninja? or Voodoo? 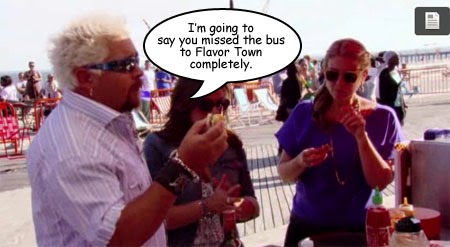 Amanda Freitag is trotted out again to judge the dogs. Between the judges and the diners on the boardwalk, we hear that Penn's dog is "heavy" and "has too much going on." Everybody loves Flo's dog, and Guy calls her a "gangster," which is one of the more ridiculous things he's ever said. And this is a man who built his career on saying ridiculous things. Herschel's dog is also too busy, and the Chevy's tires are a bit chewy. Tiffany's dog may not be particularly Jamaican, but the salsa is tasty and everyone seems to enjoy it. Finally, Vanilla's flavorless tofu blobs are, well, flavorless.

Freitag has no choice but to name Team Rachael as the winner this week, because she's only got two players and both need to go to the finale. Florence is named the MVP, which earns $2500 for City of Hope. Vanilla Ice is clearly the weak link this week, so he's told to pack his collection of hot sauces and rhymes and leave.