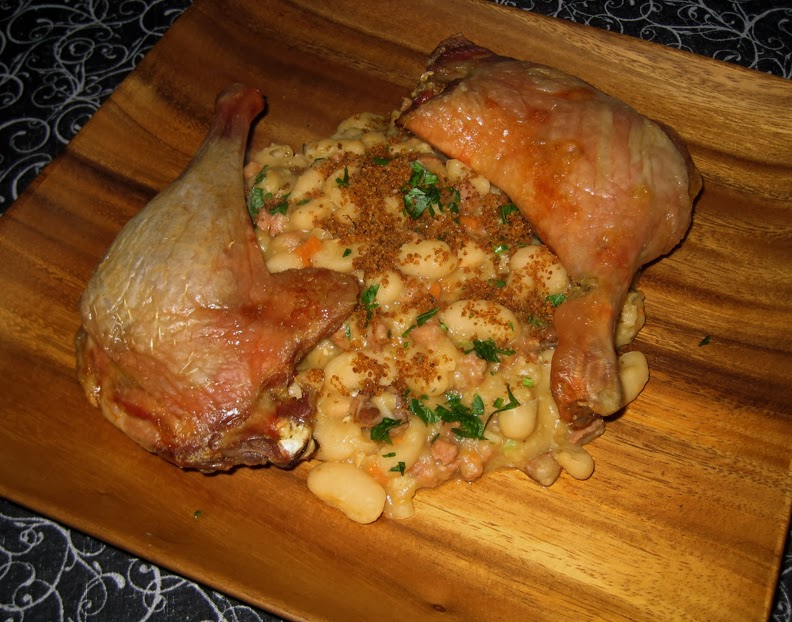 There's a new Asian grocery store in Catonsville called Great Wall. It caters to a largely Chinese clientele, and while I'm not Chinese, I find myself cooking more Chinese-style food than anything from other Asian cultures. That made Great Wall right up my alley, especially when I discovered the selection of duck parts, including whole ducks, duck tongues, and duck legs. On our first exploratory trip to the store, I grabbed a pack of two duck legs to keep in the freezer until inspiration struck.
Inspiration struck pretty quickly.
I had never cooked duck legs on their own before, but after doing some research found that confitting them (cooking them in their own fat) was a pretty simple proposition. Ordinarily, a confit involves extra duck fat in addition to the fat on the legs, but I didn't have that. (I did have a cup or so of bacon grease, left over from making a quadruple batch of bacon jam, but that wasn't going to work. Or maybe it would, but I didn't want bacon-flavored duck. I wanted duck-flavored duck.) Instead, I just went ahead and cooked the legs as is, figuring nothing could go terribly wrong.
Ok, I know you're now expecting me to relate a disaster story. But really--nothing went wrong. As the duck cooked low and slow, its fat was rendered, the meat cooked, and the skin got crisp. Exactly the results I wanted.
While the duck was in the oven, I threw together some white beans seasoned with sausage. In my mind, duck + white beans + sausage = cassoulet, and rather than going through the whole somewhat complicated process of making a real cassoulet, I cooked my components separately. I even toasted some plain bread crumbs in olive oil to mimic cassoulet's customary crusty surface.
The beans were an experiment. I found two lonely links of andouille sausage in the freezer, and added them, with a handful of carrot and onion, to a couple cans of cannellini beans. I didn't have all of the proper fresh herbs to make a bouquet garni for the pot, but I did have a little jar of bouquet garni seasoning that I got from Penzey's as a free gift the last time I placed an order. Their spice mix is a combination of savory, rosemary, thyme, Turkish oregano, basil, dill weed, marjoram, sage, and tarragon; it packed the perfect herbal punch for the bland beans. You, of course, can use an actual bouquet garni (fresh parsley, thyme, rosemary, and a bay leaf tied up in a bundle with twine), just make sure to remove it before serving.
Both elements of the dish were highly successful. And the beans were amazing. If you cook beans long enough, stirring regularly, they get dreamily creamy and taste really fattening. While my dish used pork sausages, I'm betting that if one used chicken andouille sausage, the result would be just as delicious but practically a diet delight.
Deconstructed Cassoulet
For duck confit:
2 duck legs
salt
For the beans:
1 tablespoon olive oil
1/4 cup carrot, cut into small dice
1/2 medium onion, diced
pinch salt
2 andouille sausage, cut into small dice
3 cloves garlic, minced
1/2 - 1 teaspoon Penzey's Bouquet Garni seasoning
2 cans cannellini beans, drained and rinsed
1 cup chicken stock
additional salt and pepper to taste
To serve:
minced parsley
toasted bread crumbs
To make the duck: Prick the skin all over with a needle or tip of a sharp knife. Salt generously on both sides and allow to rest for at least an hour.
Wipe salt off of duck and place in a pan or baking dish into which they fit somewhat snugly. Place baking dish in a cold oven and turn oven to 285°F. Cook for 90 minutes to 2 hours, until fat has rendered and duck is tender.
Raise oven temperature to 375°F and cook duck for an additional 15 minutes to brown skin. Remove from oven and allow to rest for about 15 minutes.
To make the beans: Heat the oil in a 3-quart stock pot. Add the carrots and onion and pinch of salt. Cook over medium heat for 4-5 minutes, stirring occasionally, or until vegetables start to soften. Stir in the sausage and cook an additional 3-4 minutes before adding the garlic and herbs. Add the beans and stock and bring to a boil. Turn the heat down to medium-low and simmer beans for 45 minutes to 1 hour, or until quite soft, stirring frequently.
To serve: Either pull the duck meat from the bones or serve legs whole on top of beans. Garnish with minced parsley and toasted bread crumbs.