How would you feel about having a dinner that consisted only of dessert? (Life is short, you know....) Five of them, presented one after the other. Dessert as appetizer course and soup course. Dessert as fish course and meat course. And dessert as well...dessert. I'm not talking about a slab of cheesecake followed by creme brulée, coconut cake, apple pie, and a brownie sundae, but rather a series of sophisticated flavors and textures, as layered and nuanced as in a savory meal. But predominately sweet.

Dessert tasting menus have been a thing in cities like New York and Chicago for a while now. While we can't yet compare Baltimore's food scene to either of those foodie destinations, it's nice to see interesting new trends hit our area. Is Baltimore ready? I'd like to think so. Especially after sampling the creations of the new pastry chef at the Four Seasons Baltimore, Dyan Ng. Chef Ng wanted to introduce her talents to the area via a five-course dessert tasting, and Mr Minx and I were thrilled to participate.

Chef Ng's resume includes nine years in Las Vegas where she was pastry chef de cuisine for all of the restaurants at Caesar's Palace. Currently, she's responsible for desserts at both Wit & Wisdom and Pabu, plus the sweet treats at Lamill Coffee. For our dessert tasting, she prepared five courses, each of which were paired with an appropriate alcoholic beverage chosen by one of the restaurant's sommeliers. 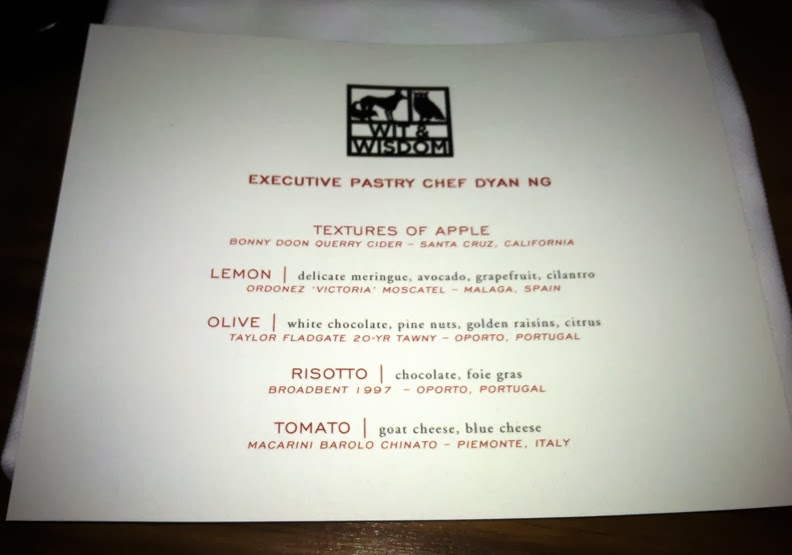 Chef Ng isn't a fan of heavy or overly sweet desserts, instead favoring interesting interplay of flavor and texture. She started us off with a dish that shows off the simple apple. The raw and cooked elements, which included a sweet-tart apple sorbet and caramelized apples, made this dessert both refreshingly sophisticated and apple-pie homey.

The second course, a play on "lemon meringue," resembled the trendy appetizer of roasted bone marrow; it was a triumph of textures. The meringue itself was light and delicately crunchy and held buttery bits of almond and tangy grapefruit. The sherbet on the side somehow took a rich ingredient, avocado, and made it even more decadent (and I can imagine a tiny scoop of it served quite successfully with some tuna tartare at Pabu). As far as cilantro on dessert--the answer is "yes."

The third course highlighted the unusual combination of white chocolate and olives. If you think about the current popularity of salted caramel and salted chocolate items, it makes perfect sense. The briny bitterness of olives cuts the buttery creamy flavor of white chocolate. The dish also featured a variety of textures, including the glassy top sheet of crisp isomalt (that we broke through, creme brulée-like), white chocolate mousse, olive oil foam, and an extra savory bit of pine nuts, golden raisins, green olives, and extra virgin olive oil at the very bottom.


The fourth course was a risotto made with chocolate and chunks of banana. On top was a pile of shaved frozen foie gras, and the whole was seasoned with truffle salt and truffle oil. Despite the savory elements, there was no mistaking this dish for anything but a dessert. Think of it as a marriage between rice pudding and chocolate pudding. But with shaved foie on top.


And just when we thought we were done, as the menu listed only five courses, we were brought a large sandwich cookie comprising creamy chocolate ganache and fresh raspberries between two chewy wafers that were texturally somewhere between a macaron and an almond cookie. (These babies are available at Lamill.) It was wonderful, but we were stuffed. And you know, it didn't seem like we had just eaten five desserts. Each course was balanced, and none were overly-sweet. My favorite was the cheese course, with the olive and white chocolate coming in second. Mr Minx was a fan of the risotto. Both of us were simply blown away by Chef Ng's creativity, and the seriousness of her playfulness (if that's a thing). After eating our way around the city for many years now, our palates were ready for a multi-course dessert tasting.

Is yours? I'm thinking yes.