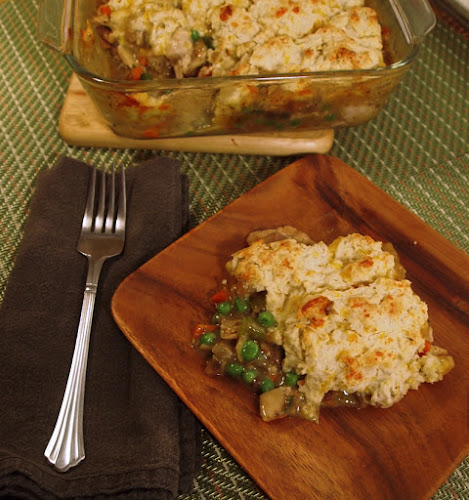 I gave Mr Minx two options for Sunday dinner, one of which was jerk chicken pot pie. Several days after choosing this dish, he informs me that he doesn't like pot pie. I ignore him and make it anyway, as: 1) it was the option he chose; 2) he'll like MY pot pie. Or so I hoped.

He later tells me why he doesn't like pot pie. He's not a fan of cooked carrots, or peas. Yet he puts carrots in almost everything that he cooks, and sometimes peas, too. I roll my eyes. I understand that he's had bad experiences with pot pies. His Mom wasn't much of a cook, so sometimes dinner was individual Swanson pot pies with their cardboard crusts and flavorless insides. My Mom made individual pot pies all the time, usually with left over pot roast. She'd booze it up with cooking sherry and pop a Bisquick biscuit crust on top, and we gobbled it up and asked for more. So I have only fond pot pie memories, but I understand the fear of a soggy crust or a filling that is more gravy than meat and veg.

But I was making this pot pie, and it was going to be glorious. Or at least pretty good.

Mr Minx decided he liked my chicken pot pie enough to eat two helpings. That's not to say that he likes pot pie now, of course.

Jerk Chicken Pot Pie
This recipe has quite a few steps, but most of them can be done in the same pan without washing it in between. Feel free to use pre-cooked chicken, if you want to make your life a little easier.

To make the veg: In a large non-stick skillet over medium high heat, add the vegetables with about a tablespoon of olive oil and a generous pinch of salt. Cook until wilted, about 5 minutes.Stir in the jerk seasoning. Cook another few minutes until everything is tender. Remove from pan and set aside until ready to use.

To make the chicken: Put the chicken in the same pan that the veg were in. Over medium-high heat without adding extra fat, cook on both sides until lightly browned, about 5 minutes total. Add 1 cup of stock, a pinch of salt, and about 1/4 teaspoon of jerk seasoning and bring to a boil. Turn heat down to medium-low and poach chicken for 30 minutes, until cooked through. Remove from heat. Dice the chicken and set aside until ready to use. Measure out the cooking liquid and add enough additional stock to make 1 1/2 cups.

Wipe out the frying pan and put over medium heat. Melt the butter and add the flour. Stir constantly to incorporate the two into a thick paste. Slowly whisk in the chicken stock and bring to a boil. Taste for seasoning and add salt, pepper, and additional jerk seasoning as desired.

Stir the reserved chicken, vegetables, and frozen peas into the gravy. Remove from the heat.

To make the biscuits: Combine flour, salt, baking powder, cream of tartar, and sugar in a large bowl. Cut in butter with a fork or your fingers. Stir in milk and cheese.

Pour chicken mixture into a 8" or 9" square baking pan. Top with evenly spaced dollops of the biscuit dough.

Bake for 25 minutes, until biscuits are golden and gravy is bubbling. Serve hot, garnished with chopped green onion.