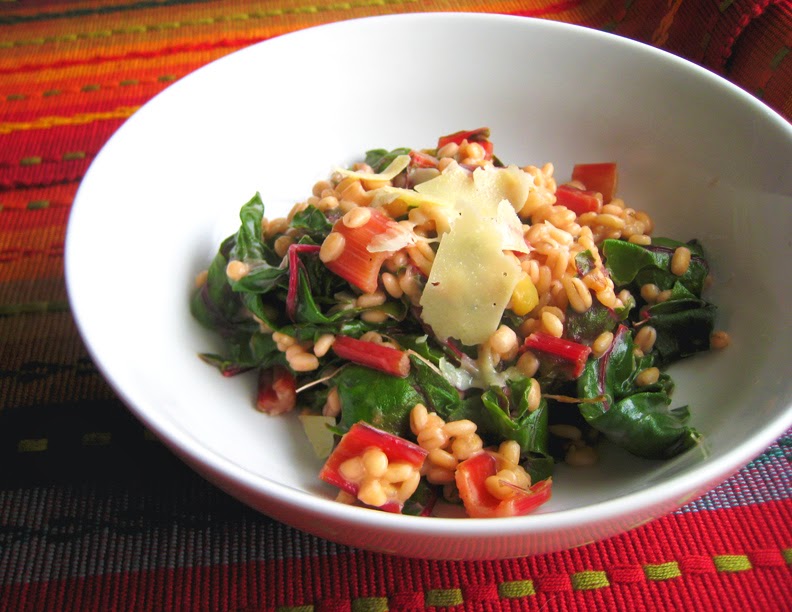 Mr Minx and I had been eating a ton of meaty protein over a period of a few short days, what with Korean bbq, Peking duck, and pulled pork being on the dinner agenda. Time for something vegetarian!

We'd recently taken a tour of the gourmet supermarkets in our area and popped in to MOM's Organic Market to see what it was all about. There, we found some beautiful organic red chard and popped it into our shopping basket. I wasn't sure what to do with it, but found a Martha Stewart recipe for chard and barley "risotto." She used regular barley, which, if cooked and stirred long enough, gets sorta creamy like arborio rice. All we had was some of Trader Joe's "10 Minute Barley," so I had to change the recipe a bit. Instead of the original 5 cups of stock called for, I reduced it to 2 and added some half and half to get a creamy texture. Martha also called for one whole preserved lemon, which seemed a bit extreme, so I reduced the amount quite a bit. I wanted a lemony bite, not lemon overload. (If you don't have preserved lemons, the zest of one lemon should do nicely.)

This was actually our first time buying and preparing chard, and we thought it was delish. Martha tossed her chard stems, but I put them in for texture and color. They added a juicy crunch, which was a nice counterpoint to the chewy barley and silky greens. It was really good and I'd do it again.

Bring chicken broth to a simmer. Heat oil in a large saute pan over medium heat. Add barley and toast for about 2 minutes, stirring occasionally. Add scallions and chard stems and cook an additional minute. Pour in one cup of broth and cook, stirring frequently, until broth is mostly absorbed. Continue adding broth a few tablespoons at a time, cooking until barley is tender. (You may not need all of the broth.) Stir in the preserved lemon.

Pile the chard leaves on top of the barley and cover the pan. When chard has wilted, about 3-4 minutes, stir it into the barley. Add the cream and butter and stir well to combine. Season with salt and pepper. Shave some fresh Parm on top and serve.

Serves 2-4, depending on if you're using it as a main or a side.