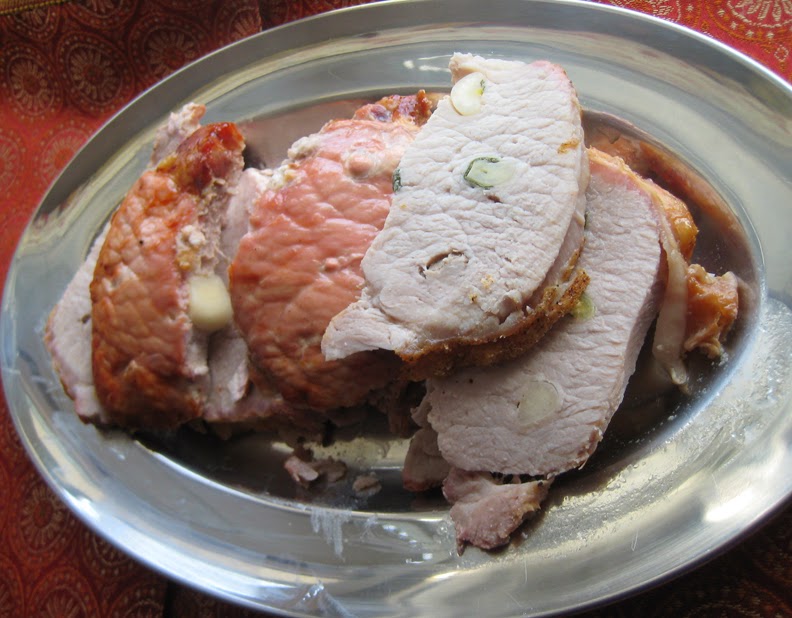 When I was young, my mother made a roasted pork loin fairly often. Back in those days, it was recommended that pork be cooked to 160°F, which rendered it dry and flavorless. And pork had more fat then! So we'd eat tons of applesauce on the side to make the arid meat more palatable. Sometimes it worked.

The 70s are long gone, but the taste of dry pork stays with me. Hence, before now, I have never cooked a pork loin myself. Granted, they don't seem to be easy to find anymore. Supermarkets have plenty of pork chops and pork tenderloins, but I seldom see larger cuts of meat. (The meat selection in most supermarkets sucks, period.) Fortunately, our local Weis market had several big pre-rolled and tied roasts, on sale yet. We bought the biggest one they had--4.77 lb--along with some garlic and fresh sage with which to flavor it.

Making a pork roast is really a super-simple deal. You only need a handful of ingredients and a couple hours in the oven to produce something that's both flavorful and juicy. Forget that archaic 160°F internal temperature requirement! 145°F is all you need. And while most chefs/foodies/know-it-alls will recommend brining the roast before cooking, who really has enough room in the fridge for a container large enough to contain a 5-lb roast AND a gallon or two of brine? Certainly not me. Our roast was plenty juicy when cooked to the proper temperature and allowed to rest for 15 minutes before carving. And it was delicious, subtly perfumed with garlic and sage.

I dare say I'll be making pork roast often now. At least when I can find it on sale. (The pre-sale price was nearly $4 per pound!)

Using a long thin knife (like a boning knife), poke holes into both ends of the roast, making some deeper than others. If your garlic cloves are on the large side, cut them into halves or thirds. Wrap each with a sage leaf and, using your finger, poke garlic into the holes. You want the cloves to end up in different parts of the roast, so the flavor of garlic and sage permeates the meat at different points.

Put the roast into a baking pan. Generously salt and pepper the outside of the roast. Place in preheated oven for twenty minutes. After 20 minutes, turn heat down to 350°F. Cook roast for 20-25 minutes per pound total, or until a thermometer inserted into the center of the roast reads 145°F.

Remove roast from the oven and tent with foil. Allow to rest for 15 minutes before carving.

Serve with applesauce. We also served roasted asparagus (put in the oven about 15 minutes before pork was done) and pierogi with tons of sauteed onion. So good. 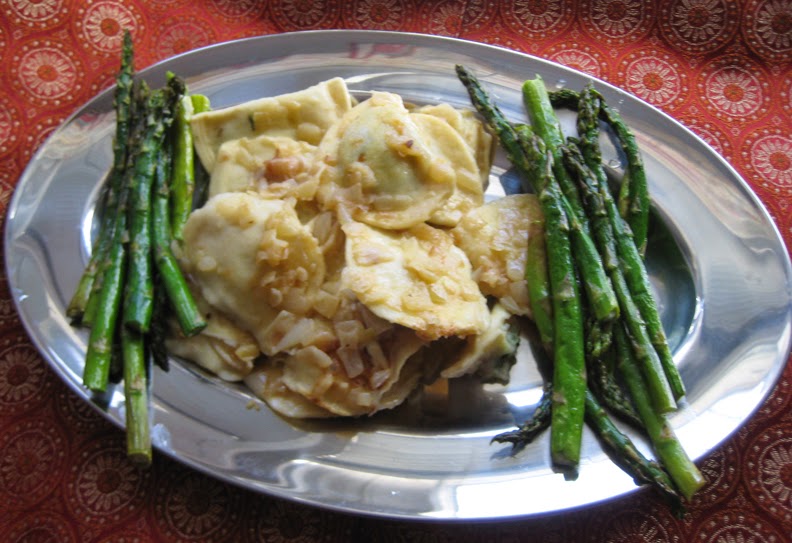