Before the holidays, we'd been hearing some buzz about a new pizza place in Hampden. No, not Paulie Gee's, which was scheduled to open last summer but instead encountered a snafu with their imported pizza oven. It was The Arthouse, an art gallery-cum-restaurant located a few doors down from Golden West Cafe. Last fall, the owners got a beer and wine license and switched their focus from wall art to table art in the form of crisp-crusted brick oven pizza, salads, and other nibbles.

On our annual pilgrimage to see the lights of 34th Street, we stopped at The Arthouse for an early dinner. The place opens at 4pm, and by 4:30, it was packed by what appeared to be a large family gathering that took up all of the tables that were adjacent to and behind the bar area. Luckily for us, the front tables were still free, so we grabbed one and perused the menu.

The pizzas at The Arthouse are fairly esoteric, with toppings like duck confit and snails. Those were the most intriguing to us, so those were the two we ordered. 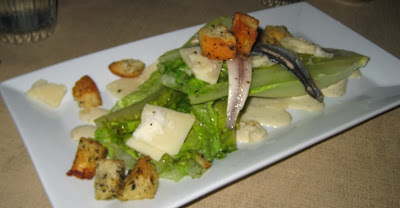 But first, we shared a grilled Caesar salad, topped with homemade croutons, plenty of Parmesan cheese, and two fresh anchovies which had been marinated in vinegar in the style of the traditional Spanish tapas called Boquerones. If you hate the typical anchovy, those strongly fishy and hairy creatures that live in cans, but you like fish in general, you should give these boquerones a try. They had a much fresher, less-fishy flavor than the usual Caesar topping, and we enjoyed them quite a bit. Our only critique of the salad is that the dressing could have used a bit more acid in the form of lemon juice. 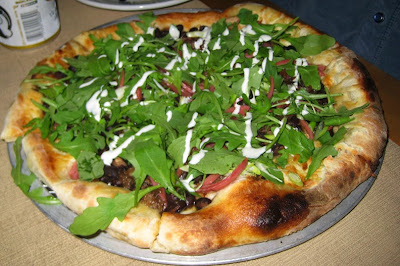 Our pizzas looked quite similar, but were extremely different. Mr Minx chose the version topped with duck confit, "black bean sauce," arugula, and crema. It was...odd. While waiting for the pizzas to arrive, we weren't sure if the black beans would be more Latino or Asian in character. They turned out to be the latter. Rather than a sauce, the strongly salty beans were scattered over the pizza along with shreds of duck meat and pickled red onion. The duck flavor was non-existent, as overpowering as the other elements proved to be. 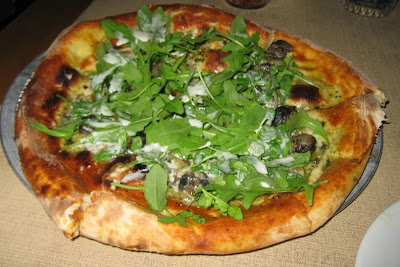 My escargot pizza was quite a contrast, with far more subtle flavors. The crust was the best part, and I suspect my pie was baked naked, as even the tip of the very last piece was still crisp. It was like a great focaccia--you know, when they're brushed with olive oil that sinks into the outer crust, giving it both a light sheen and a buttery crunch. I am obsessed with that crust. Oh, and I liked the toppings, too--a smattering of mushroom-like escargot, a tiny bit of cheese, and a blanket of arugula. (I looove arugula.) Oh, and garlic butter, which oozed off the pizza and formed a pool on the pan underneath. The Arthouse cleverly puts their pizzas on screens, so the bottom crust is elevated from the pan and can't steam. And that makes it easy to drag slabs of pizza crust through that butter puddle.

Mr Minx's crust was tasty too, of course, but the bottom was a bit softer because of the toppings. Get rid of those beans and it would have been far more successful.

Despite one weird pie and the plethora of children in the place (who, to their parents' credit, were amazingly well-behaved and surprisingly quiet), we liked The Arthouse quite a bit. It was an attractive space, with interesting art (for sale) on the walls, a long wooden bar that looked like a fun place to hang out, and there was garlic butter and arugula on the menu. I'm already looking forward to our next visit.