We're bad bloggers. There's always some restaurant that opens fairly nearby that we swear up and down to "try this weekend," but then we never get to it. Months go by before we finally get our asses in gear and try said new place.

Sofi's Crepes at Belvedere Square is one of those places. Despite being so close, we seldom find ourselves anywhere near the market, except in passing. But now that the Senator Theatre is open once again, we have a good excuse to not only drop by, but also to stay for a while.

One recent evening, we decided on a crepe dinner before seeing a movie on the big screen. (Has anyone else noticed that not only are there fewer seats in the original auditorium, but they're also smaller? Or has my ass gotten that much bigger since the last time we went to the movies?)

Mr Minx ordered the bbq pork crepe, which was messily stuffed with smoky pulled pork. He enjoyed it. Personally, I thought the sauce was too smoky, but liked that there was a generous amount of filling. I had the crepe Florentine, with spinach, Gruyere, mushrooms, sunflower seeds, and a pepper parmesan sauce. You all know how picky I am by now, so it won't surprise you when I say I think the spinach and mushrooms would have been better had they been sauteed, not raw. With every bite, my teeth yanked out a whole spinach leaf as a flavorless white mushroom slice popped out onto the table. Would have been nice if the sunflower seeds hadn't been just this side of rancid, too. According to the chef/cook/dude who made the crepes, the Florentine is one of their best sellers, along with the Kevin Bacon (turkey, bacon, 1000 Island dressing). Trust me - cooked spinach and mushrooms would taste much better.

Couldn't find fault with the crepe itself though. It was properly eggy, tender and crisp-edged. Next time I'll just get one plain, maybe with some lemon and sugar, the way my Dad used to make them when I was a kid. That BATS crepe sounds good too though (bacon, avocado, tomato, sour cream).... 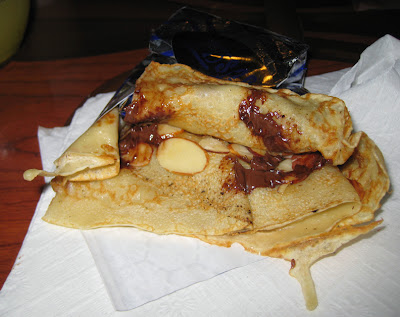 We also had a dessert crepe, which Crepe Dude thoughtfully split into two smaller, individually-wrapped portions: the turtle, with caramel, melted chocolate, and sliced almonds. I couldn't really taste the caramel, but the combination of melted chocolate and crepe took me straight to Paris. My family had taken a trip there in the 70s and we ate our fair share of chocolate-filled crepes from a street cart near our hotel. (A completely unrelated aside: we stayed at the Hotel du Danube, at 48 Rue Jacob. It was a semi-fleabag then; the first room we were shown didn't have heat, and it was an unseasonably cold November. Our second room wasn't much better, but it was warm. Now it seems to be a luxury hotel.)

While I had issues (don't I always?), I thought Sofi's was a perfect place to grab a quick bite before a film. The food was filling, but didn't weigh me down or make me sleepy, an important consideration before heading into a dark theater.