Ever wonder what it would be like to sample a dozen or so kinds of moonshine and moonshine cocktails, followed by a ton of food? Sounds like the premise for a fab new show on the Discovery Channel, no? It actually describes a recent dining experience we had at a year-old bar/restaurant in Canton called Myth & Moonshine Tavern (originally Moonshine Tavern), where owners Shanna Cooper and Jake Millisock wined (moonshined) and dined us until we could barely stand without support. 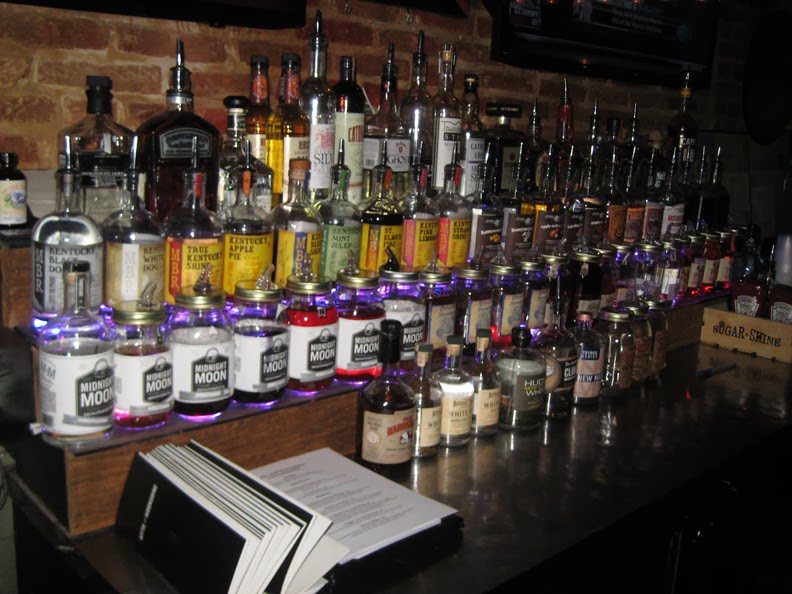 I know, speak for yourself, Minx.

Our little group met at the bar, where we were invited to order drinks from the vast array of moonshine on the menu (some of which are house infusions). 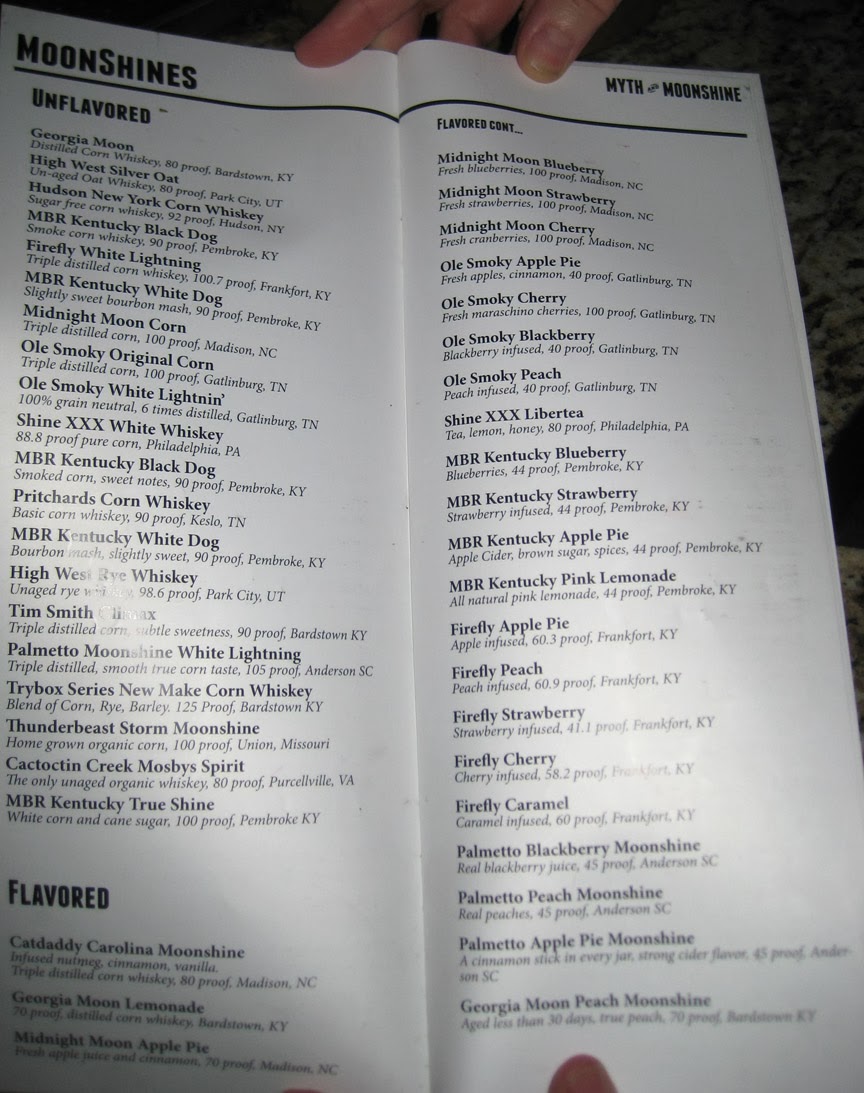 Now, when I say "moonshine," I'm really talking about unaged white whiskies. Real moonshine, the stuff cooked up in backyard stills, is still illegal. However, Tennessee has legalized commercial moonshine production, and there are several brands on the market, some of which can be found in Maryland liquor stores. There are also some whiskey companies that have jumped on the moonshine bandwagon, including Jack Daniels and Jim Beam.

Legal moonshine may seem like an oxymoron, but let's just ignore that for now, shall we? 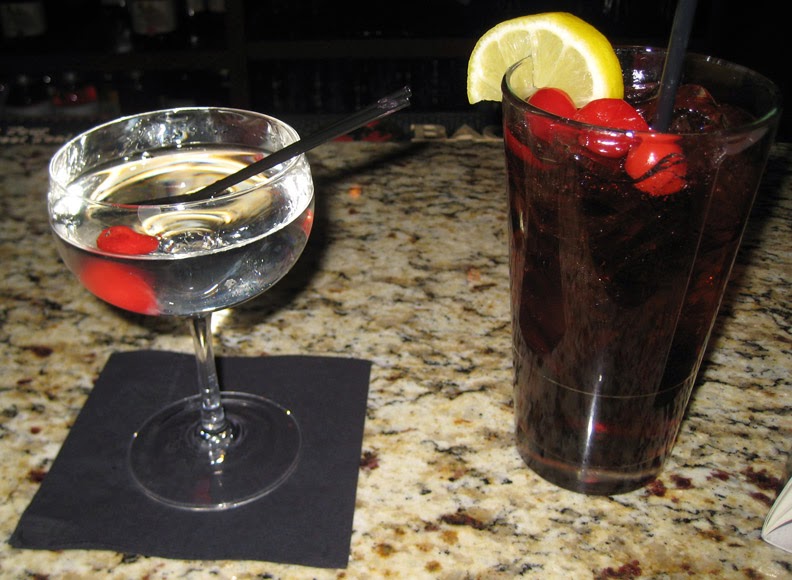 Mr Minx, a fan of the Manhattan, ordered the White Manhattan, a combination of High West silver oat whiskey, Bianco vermouth, Luxardo maraschino liqueur, and Regan orange bitters. It was indeed completely colorless, but very flavorful, if not completely Manhattan-like. I went for a drink called the High School Crush (Ole Smoky cherry moonshine, fresh lemon juice, Coke) which was sweet and easy to drink, like an alcoholic cherry Coke. Armed with our cocktails, we went into the dining room and sat at a table lined with still more cocktails and shot glass samples of variously-flavored moonshines. 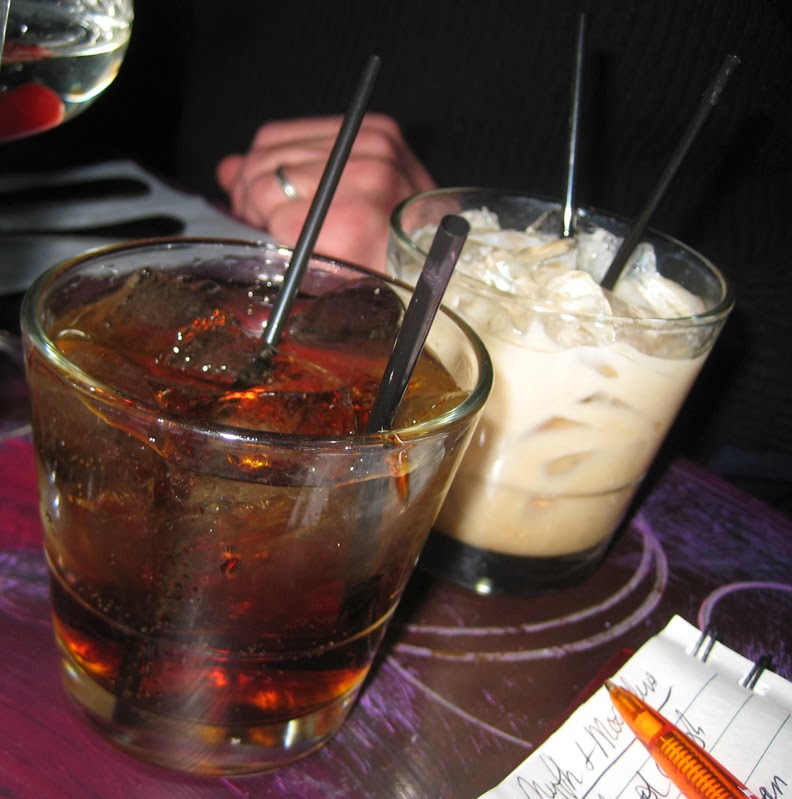 These two drinks are the Fizzy Daddy (left), made with Catdaddy moonshine, Coke, and ginger ale. The other drink is a Russian Bride and contains Kahlua, Rumchata, and more of that Catdaddy stuff. That was our favorite, by the way. Catdaddy moonshine is flavored with vanilla, nutmeg, and cinnamon and is pretty damn delicious. (And can be found at Beltway Fine Wines!) 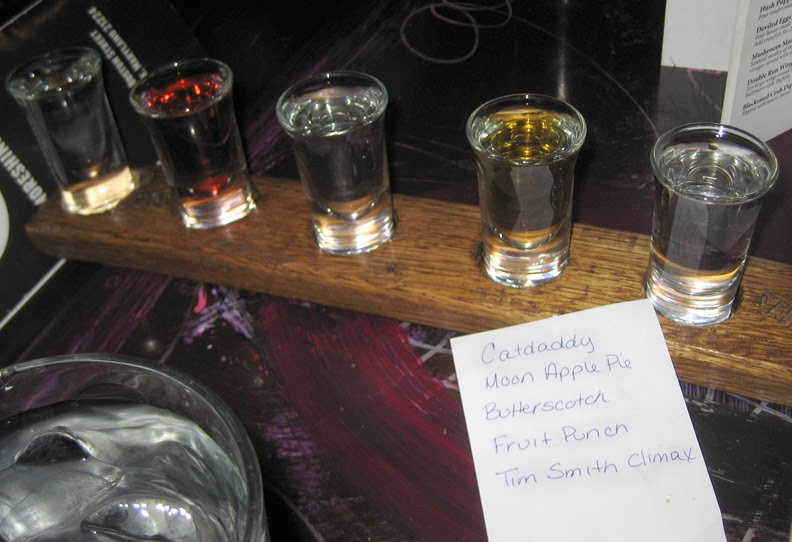 Other moonshines on our side of the table included shots of Midnight Moon Apple Pie, and moonshines flavored with butterscotch and fruit punch. Also included was a shot of Tim Smith Climax, made by the star of the Discovery Channel show, Moonshiners. He's gone legit, and his original moonshine is sweet and clean-tasting. Other flavors that made their way around the table included peach, pink lemonade, and pumpkin pie, all of which were smooth and quite tasty.

Now, we didn't just drink. We sampled an assortment of appetizers, including deviled eggs topped with crawfish... 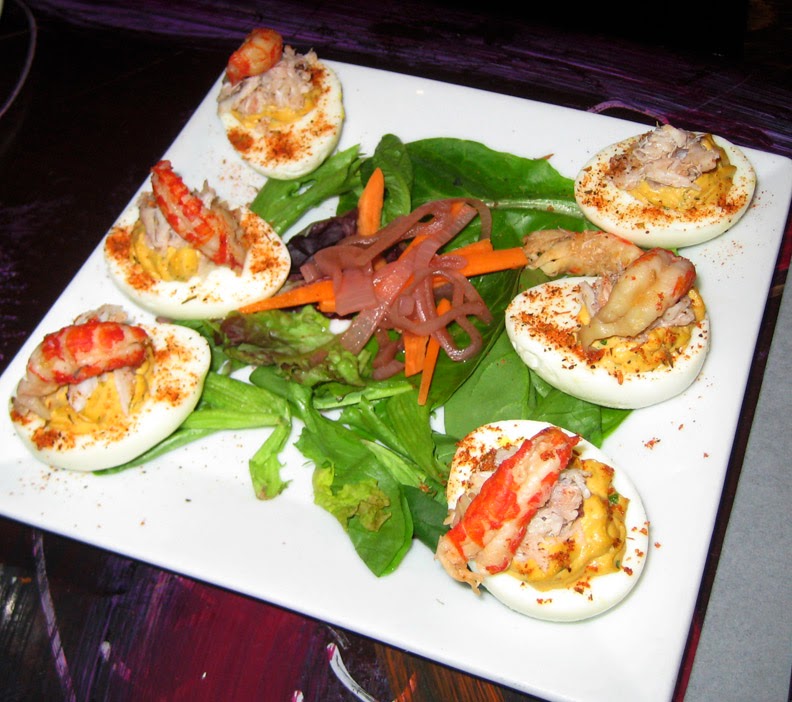 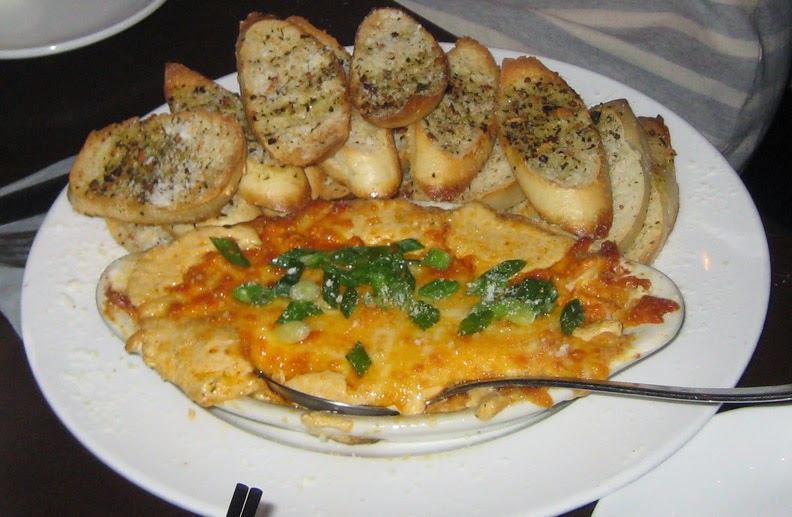 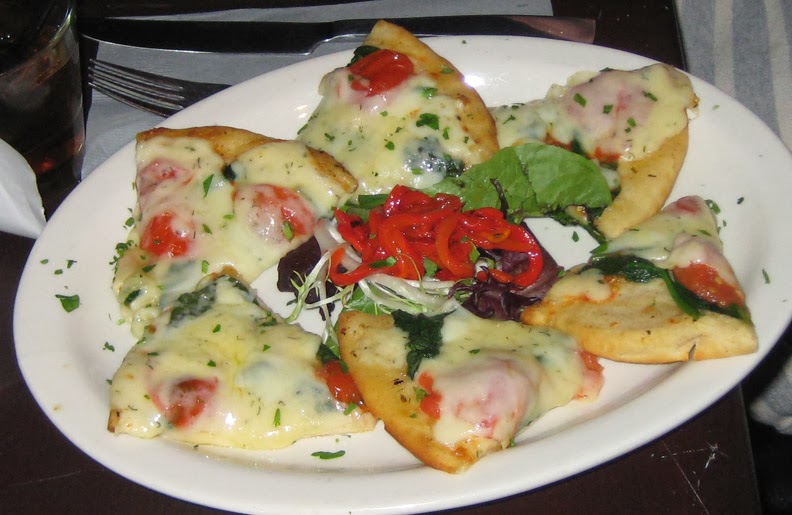 ...and something called Mushroom Manchego toast, which was a pile of mushrooms served with...you guessed it...toast topped with Manchego cheese. As a mushroom-o-phile, this was my favorite dish of the evening. Just give me a bowl of mushrooms and a couple shots of Catdaddy, and I'll be a happy camper. Oh, I'll take some of that crab dip, too, while you're up. 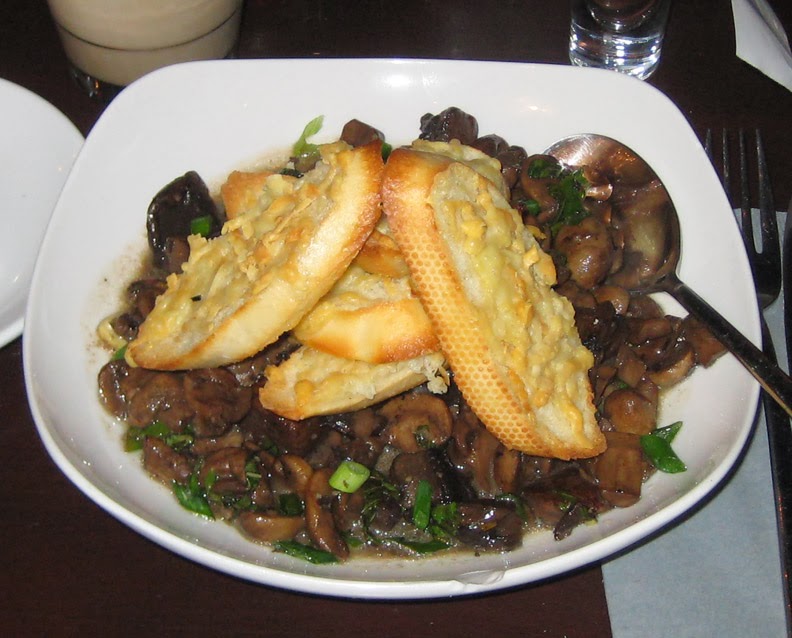 And then there were entrees. Among those our group sampled were the non-traditional, rice-free "Maryland-style" jambalaya served with a dollop of very rich grits. 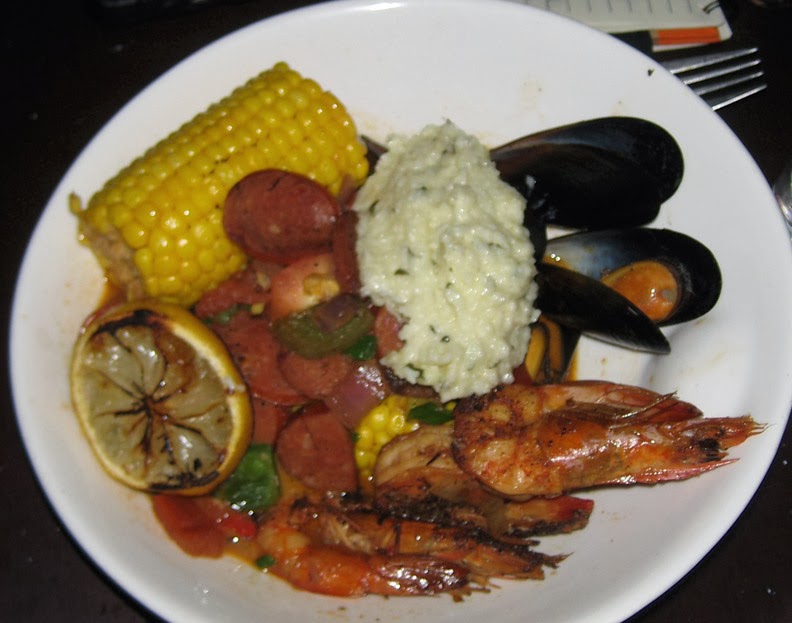 And a fine shrimp and grits. 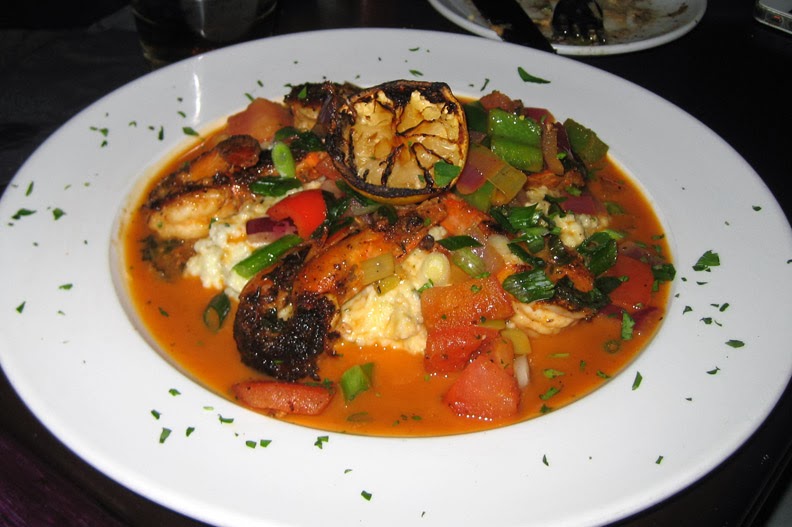 I had ribs, which were a special that night. The half-rack was very tender and the sauce was, happily, not too sweet. It's bed of mashed potatoes was very rich, yet only about half as rich as those grits. 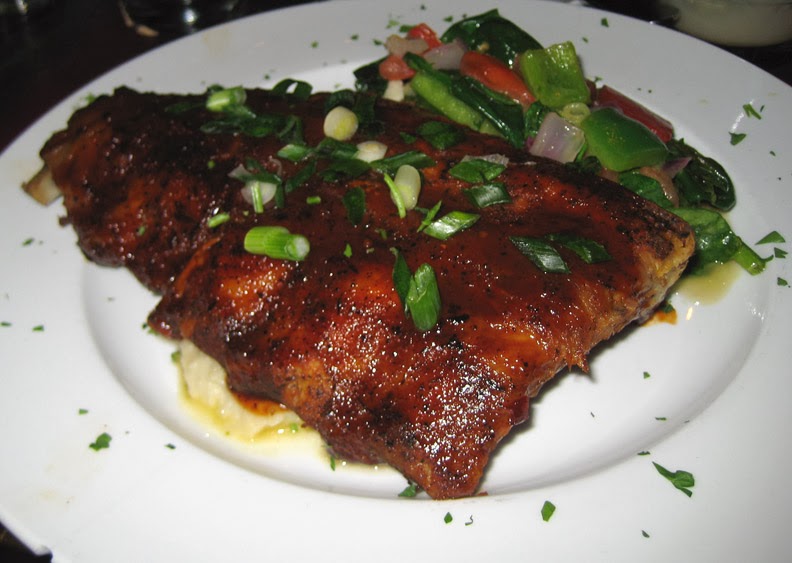 Mr Minx chowed down on a bacon cheddar cheeseburger flavored with Guinness and accompanied by a pile of well-cooked fries. 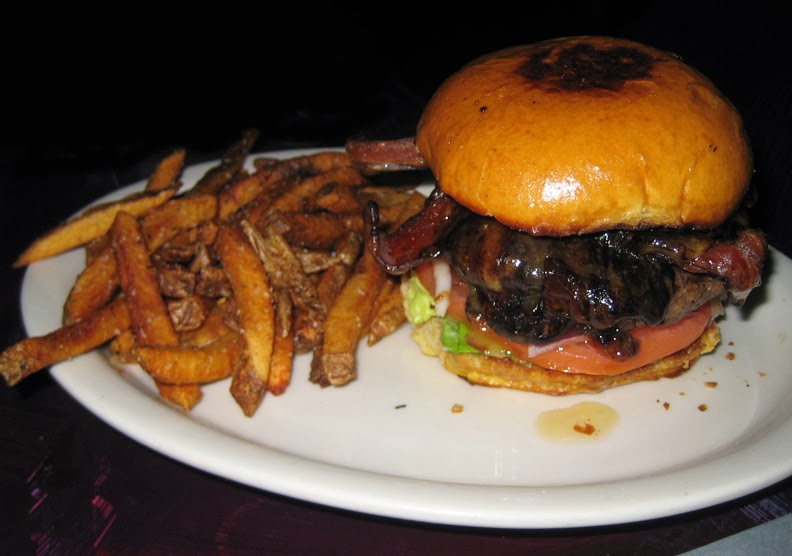 And, despite being full and half (mostly) drunk, we were served sweets, too. We were brought all three of the restaurant's house desserts, including a huge slab of dark chocolate brownie, a filo-wrapped baked banana, and unusual cinnamon roll hush puppies. 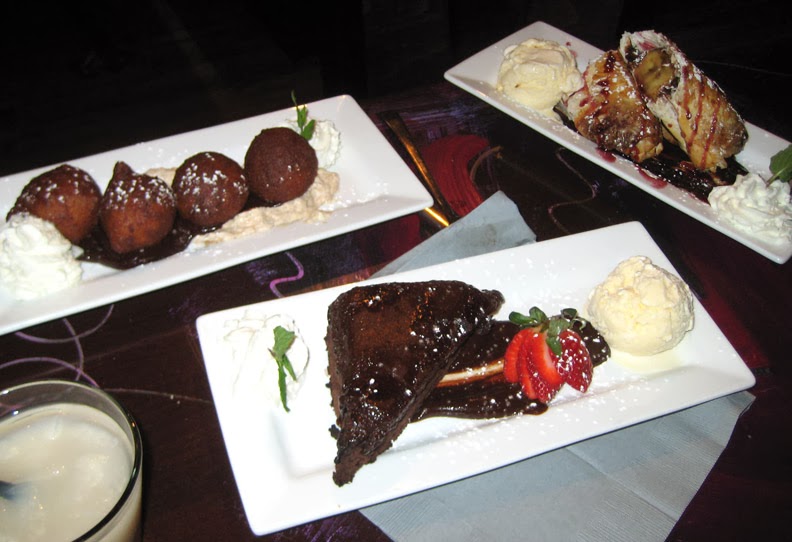 It really was quite the feast.

Now, nobody needs to eat and drink quite as much as we did at Myth & Moonshine (especially when one has to get up at 5:45 AM the next morning!) but we recommend a trip to sample some tasty hooch and an appetizer or three.

And then drink lots of water and take a couple aspirin before bed.