...the celebs meet Rachael and Guy at a huge Fairway supermarket in Woodland Park, New Jersey. There they are told they have 2.5 hours to shop, cook, and package a product that represents them. They'll need 30 packaged products, as well as enough samples for 50 guests. 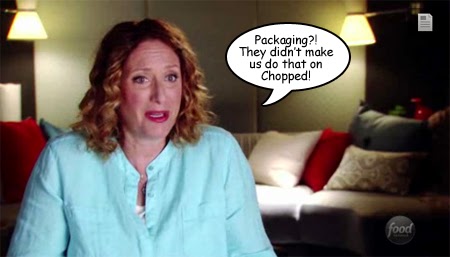 This week, each team will have an MVP; for some reason Guy keeps emphasizing that the MVP's charity will win $2500 today. Today. How is this different from the last two episodes, when the MVP's charity got the same amount of cash? Were representatives from each charity somewhere in the Fairway, ready to receive a check? would the checks be awarded on the Today show? or was this just some lame way to raise some excitement on this lame show?

The teams go off to their honkin' huge trailers to talk about their products. Why such enormous vehicles? With four people per team, a mini van would have sufficed, and gotten better gas mileage too.

Tiffany, who is one of the few contestants every week to make her own decisions, tells Rachael she's going to make a "red" sauce. Herschel is going to make a sauce, too, one that's versatile enough to be served with chicken, fish, and vegetables. Florence is another saucy wench; she'll be working on a spicy Italian pasta sauce that she's already named "Mama Flo's Hot Marinara." Rachael suggests that to make it spicy, she should add red wine. That left me scratching my head. Must have been a bad edit. Jake, for whom being cheesy is a way of life, wants to make chocolate-dipped fruit. Rachael, after rolling her eyes, suggests salsa instead. Because this challenge is all about creating a product that represents the celeb. Apparently in Jake's case, that celeb is Rachael....

Because of the great success with his dessert last week, Vanilla Ice has decided to go the sweet route again, this time making "Ice Ice Brittle." He's never made brittle before, so this could be interesting. Or it could be absolute shit. Judy is really taking the "make something that represents you" instruction to heart and is making an old family cookie recipe, no matter what Rachael says. And finally, Penn is making a sea salt chocolate sauce with a touch of spice.

After meeting, it's time to shop! Florence still has a broken foot, plus she's 79 years old, so she gets one of those scooter contraptions with a shopping basket attached to the front. She can't reach things on the upper shelves, so she flirts with male shoppers to get them to fetch things for her. She's no dummy. 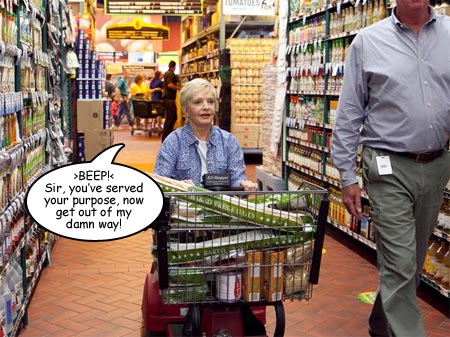 After shopping, it's time to cook!

Herschel is a self-proclaimed Renaissance Man who not only played football, has a fifth degree black belt in tae kwon do, competed in the 1992 Winter Olympics as a member of the 2-man bobsled team, and owns a food service company, he also danced with the Fort Worth Ballet. In 2012, he even talked about starting a political career. The man also has Dissociative Identity Disorder, formerly known as Multiple Personality Disorder, and has written a book about it. The man is amazing. But he can't do math. Doing the calculations to increase the original sauce recipe for his "Famous 34 All-in-One Paint" by several gallons is kicking his ass. I can sympathize--math isn't my strong suit either. But neither are football, ballet, or martial arts, so he's at least three up on me.

Commercial break! In addition to the seemingly daily marathons of Diners, Drive-Ins, and Douchebags, the show also has a new 11pm time slot. The tagline is "don't go to bed hungry." Oh no, if I watch DDD that late, I'll just go to bed nauseated.

Back from the break, we find that Vanilla Ice is making "ninja" brittle. And if by "ninja" he means not cooking the sugar long enough for it to caramelize because he doesn't have a candy thermometer and has no clue what he's doing, then ok. Guy tastes his first batch of ninja undercooked sugar and pronounces it garbage. 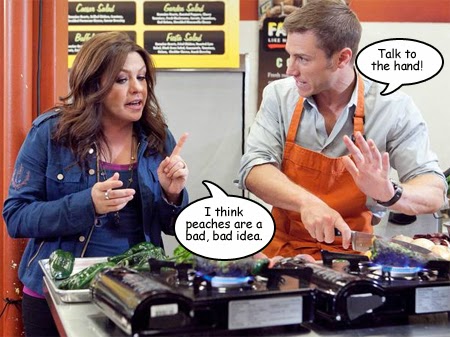 Jake is putting peaches in his salsa, which he pronounces, "salza." Rachael doesn't like that idea at all, but Jake is using the peaches and that's final. He thinks the result is "awesome."

Judy is hell-bent on making her family cookie recipe, which she is calling "pugochles" but I can't find that term anywhere. The dough is supposed to be refrigerated for 2 hours before baking, and of course there's no time for that. Instead, Judy puts the dough in the freezer, which is way way far away from where the celebs are working. The ovens are apparently even farther away, which causes Judy to grumble about why nothing is convenient. Um, because people in the bakery department don't normally do their prep work in the deli department?

Penn is really happy with his chocolate sauce, to which he's not only added chocolate, but also both Hershey's and Nestle's cocoa, along with something hot and spicy. Also probably a good quantity of sweat. He says if his son Zolten were there, he'd ladle his sauce directly into the kid's mouth until he threw up. His son is named Zolten--isn't that enough abuse?

Vanilla Ice is still having issues with his brittle, finally caramelizing the sugar enough but pouring it out too thickly. He doesn't want anyone to break a tooth, so he just puts it in the food processor and makes dust out of it. 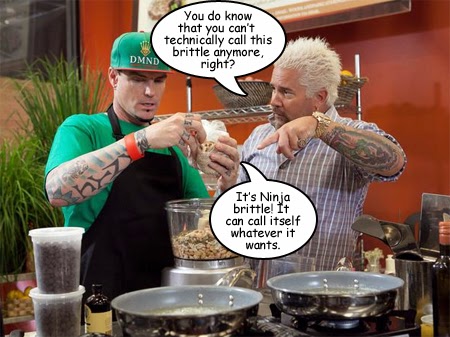 As the cooking time draws to a close, the celebs frantically spoon and funnel their respective glops into small jars. They plan to "sell" these to unsuspecting customers who should have been told to immediately throw the stuff out since the jars were likely not sterilized and I wasn't seeing any refrigeration, either.

Jars filled, the celebs become hucksters, offering samples to customers and begging them to trade tokens for product. The Special Guest Celebrity Chef Judge Person this week is Madison Cowan, who sure seems to enjoy being on reality competition shows. 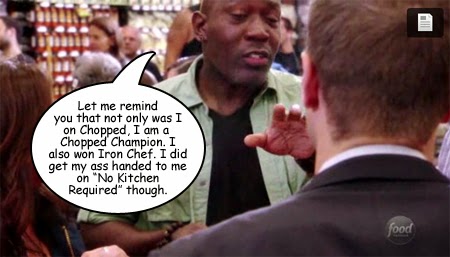 The consensus seems to be that Jake's "salza" is too sweet and needs a kick. Penn's chocolate sauce does have a kick and is "amazing." Judy is telling bad jokes to sell her cookies, which are deemed "fabulous." 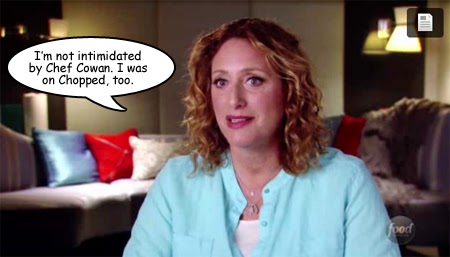 Florence is begging for tokens, but her sauce is "perfect." Tiffany is telling people she's "Tiffany from the 80s," and her spicy sauce seems popular, as does Herschel's, which looks like mayonnaise but people seem to like it anyway. Guest judge Madison Cowan thinks it's "wicked." Vanilla Ice's brittle is too pulverized and there's not enough of it to taste what with all the ice cream and chocolate syrup he's dishing out with it.

Rachael, Guy, and Madison discuss their favorites, then leave Madison to make the ultimate decisions. Penn and Herschel have earned the most tokens from the guests, which makes them the MVPs. I didn't see any checks being handed to anyone, so apparently "today" didn't mean "right now." Or even today.

Rachael's team, despite having three well-received dishes and only one disaster, is declared the loser. (Guy's team lost last week and we can't have the same team lose members two weeks in a row!) Jake's "salza" was the bomb, and I don't mean that in a good way, so he gets to fly his plane to some other reality show. 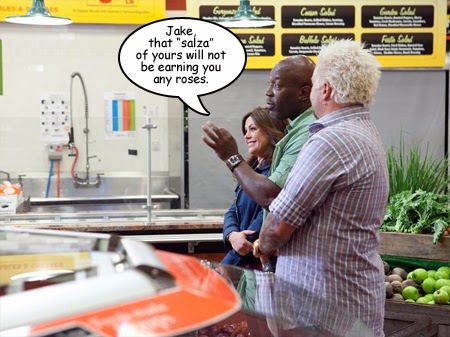