I got very excited (well, somewhat excited) when I heard that an Indian food truck was cruising the streets of Baltimore. Word was that not only did it serve Indian food, but it also had a tandoor oven on board. This I had to see for myself. So a few weeks ago when the nondescript orange truck with the name "Sultan" painted on the side pulled up to the already-congested corner of Baltimore and Greene, I ditched my original lunch plans.

We usually gauge the deliciousness of an Indian restaurant by its chicken tikka masala. While not an authentic Indian dish (it is apparently of British origin), it is found on Indian menus everywhere and is a Minx family favorite.

As I waited for my lunch, I peeked over the counter into the truck and saw the tandoor. I watched one of the two guys on the truck take a bit of dough, roll it into a small round, and slap it onto the inside wall of the oven with a gaddi (a pillow-like pad traditionally used to make tandoori breads). In a few seconds, he retrieved the bread with a long hook and placed it atop my food.

My chicken also came with a bit of salad, and a container of yogurt sauce flavored with green chiles and cilantro. The chicken itself, four nicely-sized chunks of breast meat, were moist. The sauce was neither as creamy nor as sweet as some versions I have eaten, but was very good, and there was just enough of it to moisten - but not soak - the basmati rice underneath. 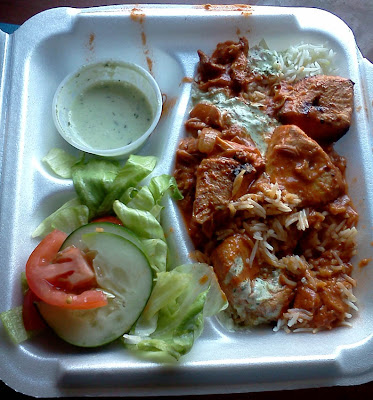 For my second Sultan tasting, I tried the "pulled lamb" which can be had either over rice or as a sandwich on naan. The generous portion of tender lamb, bathed in a deliciously spicy and somewhat hot sauce, made for quite a hearty sandwich. 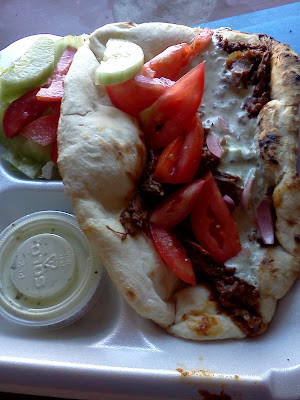 I'm still impressed that they make their own fresh naan. Nothing better than one straight out of the tandoor!  I look forward to trying more from the Sultan truck. If you see it in your 'hood, you should definitely give it a try, too.