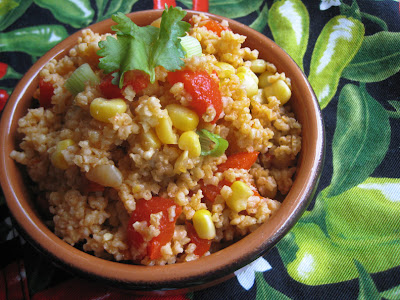 Ages ago, I used to work with a woman whose last name was Millet. One of my managees at the bookstore, she was fun, enthusiastic, and loyal - she quit when I did. We used to mispronounce her name on purpose, but it's been so many years, I can't remember if her name is "mil-LAY" and we called her "MILL-it," or vice versa. In any case, I found her on Facebook and sent her both a message and a friend request. She hasn't responded to either.

Maybe because I used to mispronounce her name on purpose. :(

In any case, the millet that is the real subject of this post is a grain. One of the oldest known to man, and a diet staple for much of the world. And until recently, it had never passed my lips. Millet isn't often found on restaurant menus in the US, which is a shame, because it's both versatile and tasty. It's actually quite reminiscent of couscous, only it takes longer to cook. Plus, it's a whole grain, so its more nutritious than couscous.

For my first millet experiment, I played with another recipe from The New Whole Grain Cookbook: Terrific Recipes Using Farro, Quinoa, Brown Rice, Barley, and Many Other Delicious and Nutritious Grains. Basically I used the method and most of the ingredients, but I changed up the seasoning to work better with the chicken molé I was making for dinner that night. The original recipe was for African millet salad with corn and peppers, but instead of using paprika and allspice, I used cumin. I also substituted lime juice for the lemon juice, and instead of adding tomatoes, a teaspoon of tomato paste went into the dressing.

The result was ok. Somewhat bland, albeit lime-y. But much much MUCH tastier than buckwheat. It definitely was like couscous, so the next time I use it, I might leave it fairly plain and serve it hot with a sauce-y main dish.

Any suggestions? Also, anyone know what I should do with the box of freekah I bought at Whole Foods the other day?