Milk Jam: Not for the Impatient

I may not be the most patient person in the world. This is why I have yet to make short ribs in my SousVide Supreme™. Oh sure, I can put a pot of chili on to cook for several hours while I do something else in another part of the house, no problem. It's the ability to leave the room and go elsewhere that works for me. With milk jam, however, I had to sit vigil over the pan, lest it boil over and bespoil my (granted, already messy) cooktop.

I stumbled upon the recipe whilst perusing the September issue of Bon Appetit at the dentist's office Yes, I let my subscription lapse. :::hangs head::: (I really should rectify that. I get Food & Wine, but prefer Bon Appetit because...a little secret...I don't care to read about wine. Apologies to whomever it was that anonymously gifted me with a subscription to Wine Spectator a few years back.) The simplicity of the recipe struck me, and I committed it to memory. 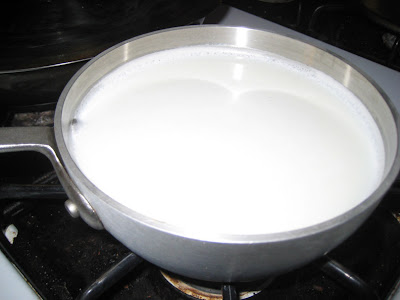 I busted out my fancy All-Clad saucier for the job. (It's the only piece of All-Clad I can lift without my wrists screaming for mercy.) Here he is at the beginning of the cooking process. 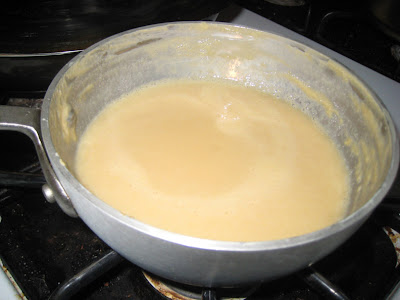 And here he is again, after 90 minutes. Yes, after twice the recommended cooking time, the milk jam was medium beige and measured far more than a scant cup. But I was tired of perching on a chair in the kitchen, giving it the evil eye.

For the most part, the milk behaved itself, burbling contentedly between stirs. But every once in a while, it got too big for its britches and bubbled to the top edge of the pan, at which point I raced to turn the heat down. Despite the mind games, there were no boil-overs. Yet I was not quite victorious.

After refrigeration, the jam thickened up quite a bit, but wasn't as thick as either sweetened condensed milk or caramel. The flavor reminded me of a Japanese candy that I like called Milky. The suggested use for this milk jam is as a topping for chocolate cake when mixed with sour cream or creme fraiche, but I rather like it as a dip for fresh fruit. Strawberries are nice, as are nectarines, bananas, apples, and just about anything else. 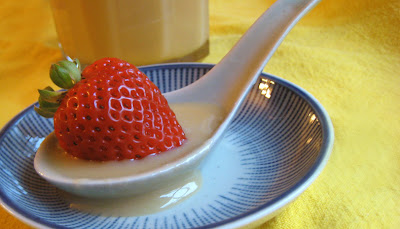 Probably chocolate cake, as well, but I might not have enough patience to wait for one to finish baking. In the meantime, I may eat all of the milk jam straight out of the jar with nothing but a spoon for company.