I had been promising my brother for months that we'd go to Grace Garden, but at the last minute I changed the plan. After reading this post on HowChow, I decided that I needed to eat that duck as soon as possible. Plus I still had one more Groupon to use, and Red Pearl doesn't involve quite as much travel time as Grace. So Mr Minx and I headed to Columbia where we met up with MinxBro and MinxDad and proceeded to order a ton of food.

Red Pearl really tries to be a fine-dining experience, at least in appearance, but I have no use for the fancy gold-rimmed water goblets and the silverware, not to mention the salt and pepper shaker on a small square plate. All of this stuff just takes up precious real estate on the too-small tables. Bring me a tea cup and a set of chopsticks and I'm set!

We knew we were getting the duck, and my brother was willing to order the other dish I was jonesin' to try - the cumin lamb (cumin is a very unusual spice to find in a Chinese dish), but we still had to decide on at least two more. Red Pearl has a Sichuan menu available online, but it's merely a sample of the two pages of interesting dishes on the physical menu. 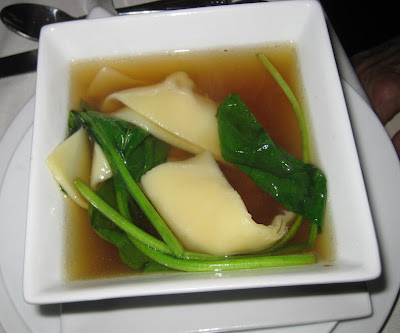 My dad ordered a bowl of won ton soup, which is his usual MO. The one time we had eaten dinner there before, my friend LaRaine ordered the Westlake Seafood soup, one of the snotty egg-drop-type soups she seems to favor. It was ok, but not really my thing. I was curious to see if Red Pearl did justice to won ton because in so many places the broth is substandard and watered-down. While Red Pearl's version didn't quite have the flavor that I hold in my mind's palate, it was still pretty good, with a strong broth and dumplings that weren't thick and pasty. 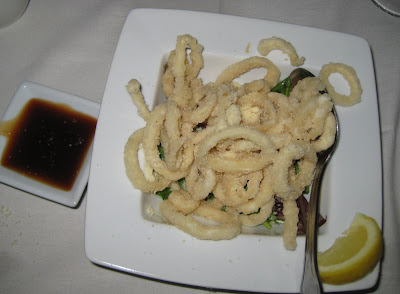 My brother is a calamari fiend, as am I, so we ordered the calamari appetizer for the table (minus Dad, who still won't touch the stuff, no matter how much we yum-yum over it). Possibly the most unusual variation I've ever had, this squid - light and springy, with a pleasantly crisp coating - reminded me of...Funyuns, and not just in appearance. I thought the dish tasted a bit like it had been seasoned with onion powder, and, oddly, grated Parmesan cheese. The dipping sauce was a bit like duck sauce mixed with Worcestershire. I'm not saying it was bad - I rather enjoyed it. Just odd. 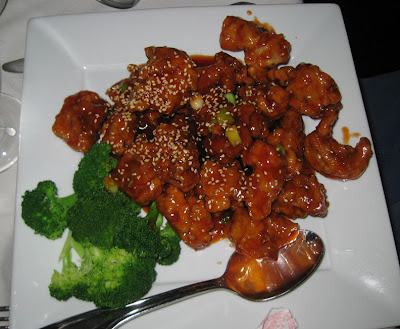 Dad, ever the adventurer, chose the Sesame Chicken from the standard menu. It was a pretty good rendition, with a tomato-y, not too sweet, not too gluey sauce. 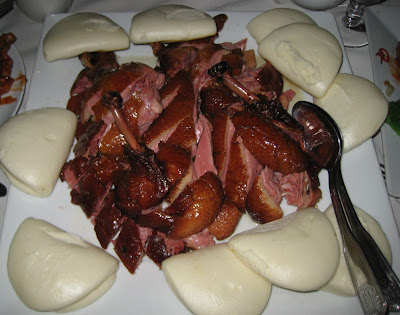 Now for the tea-smoked duck. In addition to HowChow, a review in the Washingtonian also raved about the dish. According to Todd Kliman, the duck is...


...first smoked in a wok, where a slow-burning mound of jasmine turns the meat a deep pink. It’s then roasted to a mahogany brown. The meat, with a thin layer of fat beneath the skin, was as rich and juicy as the best spare ribs. We made sandwiches with the accompanying steamed buns, stuffing them with equal parts meat and skin, which crackled like potato chips.

While our duck did indeed sport deep pink flesh and brown skin, there was quite a thick layer of fat under the skin, which while not soft, was not crackly, either, definitely not comparable in any way to a potato chip. The flesh was rather tough, and it took some wrestling to get it off the bone and into a bun, making for some extremely greasy fingers. The taste was mildly smoky, somewhat ham-like, and completely different from the delectable version of the same dish served at Grace Garden. While the duck at Grace is neither pink nor crisp, the meat is melt-in-the-mouth tender, the fat is non-existent, and the dish is thoroughly smoky. 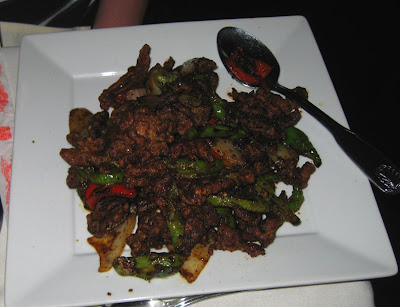 Another dish Kliman raved about was the cumin lamb.

One—simply called cumin lamb—is an ordinary-looking stir-fry of meat and peppers. But the strips of lamb were tender inside, crunchy outside, and the cumin mingled with the numbing peppercorn and the chilies to produce a fascinating taste—imagine, all at once, the saltiness of potato chips, the spiciness of KFC, the heat of a fiery salsa—that kept me going back for more.

A bit of hyperbole, perhaps. While the lamb was tender, with a crisp outside due to deep frying, and the flavor was extremely cumin-y without sinking into the realm of armpit, he neglected to mention that there was so much of the spice crusting the meat that it gave the outsides an unpleasant granularity.

However - it is better than KFC. That comparison is bit of an insult. 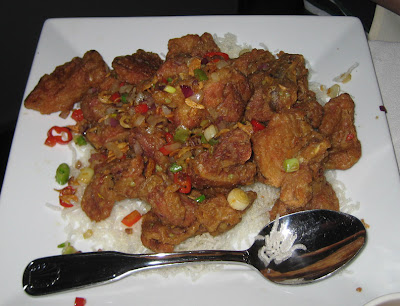 My favorite dishes of the evening were random choices from the menu. Mr Minx picked the salt and pepper pork chops, which consisted of juicy chunks of pork on the bone, lightly floured and fried, and coated in a mixture of salt and pepper and garnished with sliced fresh chiles. Simple and delicious. 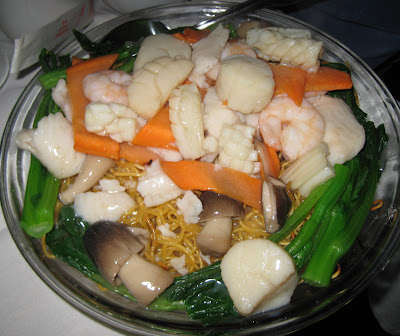 We also tried the Red Pearl pan-fried noodles topped with shrimp, scallops, fish, and squid. The seafood was perfectly cooked, the noodles were crisp where they weren't covered with sauce, juicy where they were, and the sauce itself was rich, despite its paleness.

While I felt disappointed by the lauded duck and lamb dishes, I was buoyed by the deliciousness in the pork and the noodles. Grace Garden may still be our favorite Chinese restaurant, but we'll be back to Red Pearl to try some of their many other dishes. Can't really ignore a restaurant that serves duck tongues three different ways!