Cooking Something Up at Phillips

Mr Minx and I were invited to attend a cooking demonstration called "The Freshest Catch," part of Phillips' "Cook, Crack & Eat" series of cooking classes. While they are called classes, the demo was held in the dining room so participants didn't actually see any cooking being done. Instead, Phillips Harborplace sous chef Jonathan Kappes demonstrated various fish-prep techniques, like skinning and fileting a whole salmon, removing the bloodline from a side of tuna, assembling a Phillips'-style stuffed flounder, and cutting swordfish steaks. Not that we'd be doing any of that at home (except perhaps filleting and skinning a smaller fish), but it was interesting to see how a restaurant kitchen breaks down their fish for service. He also gave us tips on choosing fish for home consumption: make sure the eyes are bright and not cloudy; the flesh springs back when pressed with a finger; the gills are red and not black or cloudy. And fresh is almost always better than frozen!

While demoing each type of fish, Chef Kappes described a dish from Phillips' menu that utilized that particular cut, after which we were served that dish - definitely the best part of the class!

First off, we were presented with tandoori spiced salmon with cous cous, Mediterranean salad, & Greek yogurt. Of the four dishes we tried, this was my favorite. The salmon was perfectly cooked and moist, and the yogurt sauce (not pictured) - flavored with garlic, mint, dill, lime, and sugar - was subtle and delicious. I appreciated the pretty colors in the dish, something I don't aways achieve in my own home cooking. 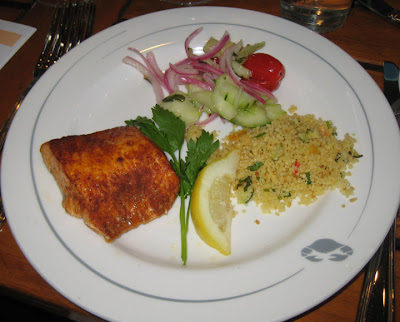 After the tuna demo, we were served blackened ahi tuna with bok choy and wasabi mashed potatoes. The tuna was mid-rare and could have been more rare for my tastes (raw would have been best), but it was good and not overwhelmed by the blackening seasoning. The mashed potatoes, which were very creamy and seasoned with coconut milk as well as wasabi, were somewhat sweet and something I definitely would like to try to make at home. Luckily, I can, because Phillips provided recipes for everything we ate today. 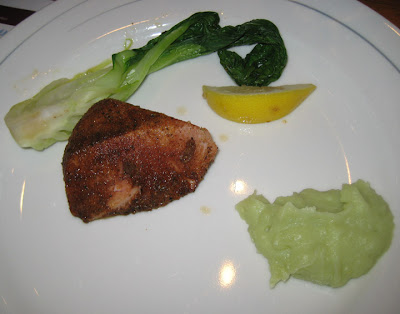 Chef Kappes showed us the Phillips method of stuffing flounder. "Stuffed" in many places merely means "topped," but at Phillips, 3oz of crab meat is sandwiched between two 5-oz flounder filets, making for a protein-heavy portion. Rather than adding carbs to the plate, they serve the fish with a side of green beans almandine seasoned with a touch of garlic. This dish has been on Phillips' menu since day one, and it has that classic Maryland flavor profile that is so familiar to us locals. 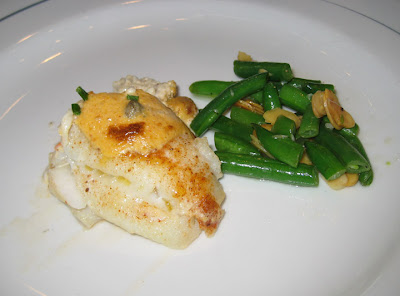 Finally, the chef broke down a huge side of swordfish while describing a preparation that he had designed for the specials menu one evening. The swordfish we were served was very simply grilled and came with Jasmine rice flavored with coconut milk, a pineapple chili salsa, and baby arugula. I was really looking forward to the pineapple salsa, but ended up not getting very much of it on my plate. 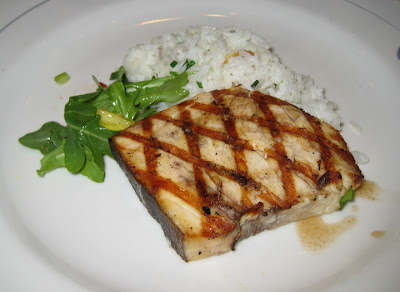 At this point you're probably thinking, "man, that plating is shitty!" That's because the dishes were served family style by two servers who each had different components of the dish. They're all going to look a lot prettier when they come out of the kitchen pre-assembled.

And just when we thought we couldn't eat any more (we doggie bagged most of the swordfish), out came portions of tiramisu for dessert. And then we were given a goodie bag containing more recipes, a can of Phillips seafood seasoning, a bag of seasoned nuts, coupons for Phillips products, and a $25 gift card to Phillips! So...if you think that $50 sounds a bit high for a cooking class, then consider it a rather filling lunch with bonuses, instead.

There are currently no other Cook, Crack & Eat classes scheduled, but they have become more and more popular so look for them to pop up again. In the meantime, you can like Phillips on Facebook, or follow them on Twitter, where they're likely to announce future classes.

(We were able to attend the class for free, however, all opinions expressed in this post are those of Minxeats.)