Bear with me people - I have a potentially brain-damaging sinus headache at the moment. Not only that, that stupid-ass Katy Perry song, "Firework," is on auto-play in my brain. I blame this on the two commercials I saw last night--for two different things--that featured the song in the background. I have a couple of major issues with it: 1) Why does Perry scream the entire song like a bad karaoke performer, and did I maybe just answer my own question?; 2) Did the writers not know that "firework" is NOT the singular of "fireworks?" (Five people are credited with writing that piece of tripe. FIVE. I guess five times stupid still equals stupid.)

ANYWAY, enough of that. It just makes my headache worse. On with the Montageapalooza! (That's awkward, isn't it?) 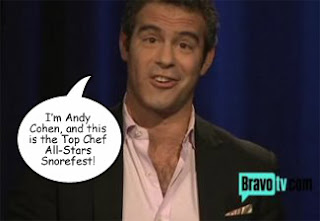 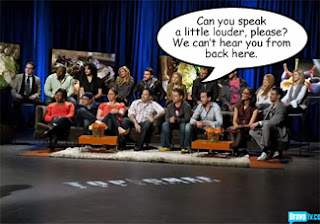 First off we get to see Richard Blais' "Journey to Top Chef," including scenes of DoucheyMike's eyeroll when Blais is announced the winner. 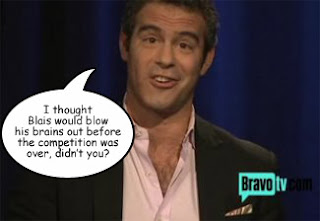 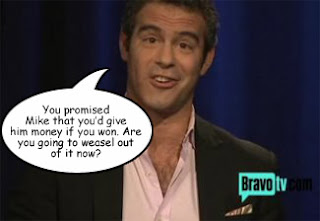 Blais says that investing in Mike's new restaurant, Graffiato, is a possiblity, and Mike says it doesn't matter because he's already got Blais' friendship and blahblahblah buttering him up for a nice cut of the $200K.

Then it has to be brought up once again that Mike and Antonia are cousins. They get along now, and their mothers especially have embraced the whole famiglia thing, but not so long ago Antonia complained about everything Mike did. That brings a montage of Mike farting and belching and being otherwise alluring in the Stew Room, much to his cousin's chagrin. She complained about it so much, it leads me to believe she was probably actually attracted to him. Eww. 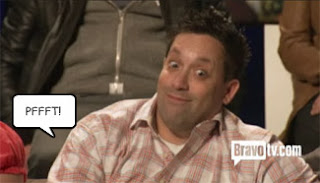 Speaking of attractions, Andy poses a viewer question to Gail: out of Fabio, Spike, and Angelo, who would she date? She reminds everyone that she's married, but she chooses Spike because she's known him the longest and because they have a "Canadian connection." That could sound like something dirty, maybe a reference to a sexual position, if not for the word "Canadian" in it.

When Padma is asked the same question, she unveils her inner lesbian by choosing Elia or Casey, and if neither of those choices panned out, she'd like to "motorboat" Antonia.

Hard to tell if Antonia was appalled or excited about the whole thing.

I think, instead of asking the dumb "who would you date" question, the whole gang should have played MFK for the rest of the show. As for me, I think my choices for "marry" and "kill" are pretty obvious..."f*ck" is damn difficult, however, because honestly, none of them turn me on. Angelo is handsome, but I'm pretty sure he'd need to be looking in the mirror while doing it. I've never been attracted to Fabio. Hmm...I'm forgetting Tre, who would definitely be in the running. Actually, I think I'd have to choose Stephen Aspirino. He'd be so involved in trying to decide which wine goes better with condoms that I'd be able to sneak away without him noticing.... 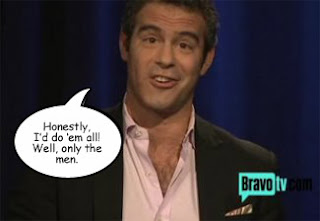 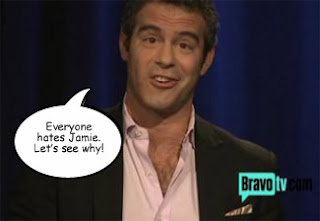 Jamie, like Marcel, is one of those people who never need to (dis)grace my television screen again. 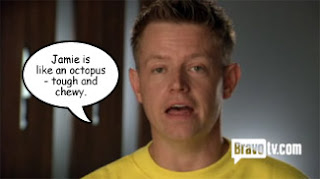 After watching a montage of her managing not to cook, and going to the hospital to get a whole two stitches when she cuts her finger, she offers nothing but excuses. She's really quite the bullshit artist. 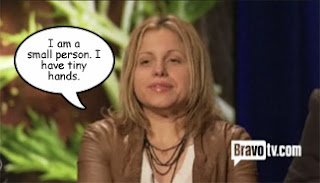 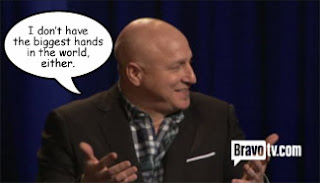 The montage did not include scenes of her laughing at *everything* whether it was funny or not, so I'll provide my own. 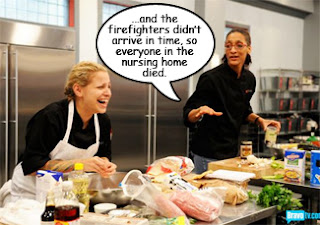 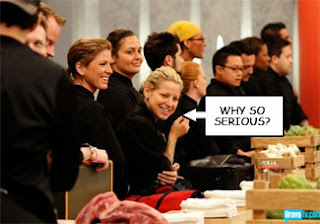 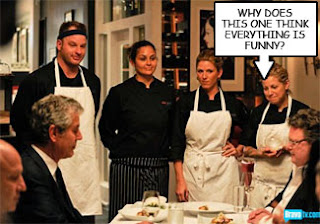 And then it's time for the obligatory bromance sequence. This season, we had two. 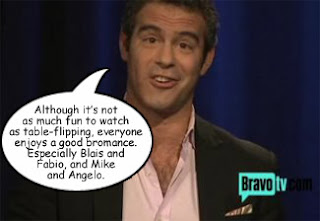 Fabio liked to kiss Blais on the side of the head, and Richard missed his wife so much, he didn't seem to mind at all. 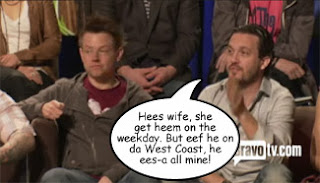 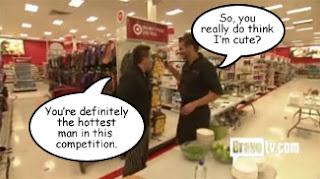 Angelo apparently missed his ex-mail order fiancée so much, he allowed Mike to occasionally tweak his nipples. Otherwise, how could he find Mike attractive in the least? 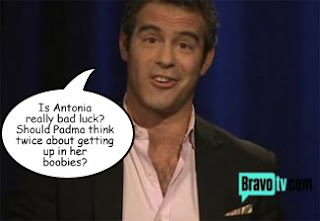 Then there was talk about Antonia, the Black Hammer. Dale Talde is convinced that she's cursed, but Antonia claims it was all merely a coincidence that when partnered up with another chef, it was almost a guarantee that chef was going home. In the case of Jamie and Tiffani, both went home for the same challenge. 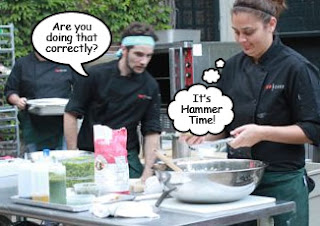 Oh, and then we had Marcel spotlighted in a sequence that had one of his tantrums set to a Housewives-style auto-tuned rap music video called "Put it on a Plate." And Muppets being rude. And chatter about Mike cheating by using Blais' idea. And a montage of the judges acting silly, including a drunken Padma who had two "gins and tonics," which raised a debate whether "gins and tonics" was grammatically correct....omg...and I'm looking at the clock and thinking "IS THIS EVER GOING TO BE OVER?" 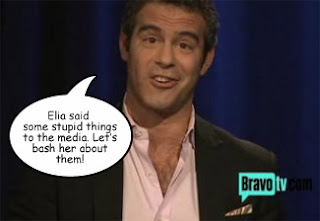 Elia, bitter after her early PPYKAG-ing waaaaay back in Episode 1, ranted to reporters about Tom Coliccio and his sell-out ways, how he shills for Diet Coke and serves only corn-fed beef in his Vegas steakhouse. Tom actually engages her in this silly argument, saying that he also serves grass-fed beef, and that he drinks Diet Coke. Possibly at the same time. Whatever.

And then there's a palate cleanser montage of Fan Favorite Carla being Carla - dancing, jumping around, and being her delightful self. 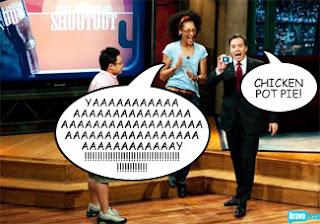 And I'm completely bored with this so I'm going to end it right here.

Next week: No more All-Stars! theminx is going to take a breather for a while, so no Masters recaps. I will be writing them (in a different format) on AllTopChef.com, however, so mosey on over there sometime.