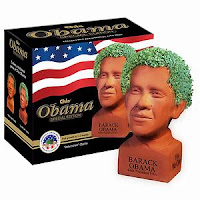 Remember the Chia Pet? While the fad of growing "hair" on clay vessels shaped like animals or human heads was amusing, chia seeds are much more beneficial to humans than one might think. For one thing, they are good for dieters because they absorb many times their own weight in water, forming a bulky gel that gives one a full feeling after eating. And, perhaps more importantly, they contain a high level of Omega 3 fatty acids, even more than that other touted source: salmon.

Studies show that consuming lots of Omega 3s = lower triglyceride levels, so we've incorporated them into our diet. I bought mine at Nuts Online.

So what does one do with Chia seeds? You can sprinkle them over cereal or salads, and stir them into muffin or cupcake batters. I used them as a topping for rye bread, along with caraway seeds. If you stir them into a liquid and allow them to sit for a while, they will form a gelatinous capsule around themselves, thickening the liquid. In this form, they can be used to thicken salad dressings or sauces. With a little milk and flavoring (and a couple of hours) they can make a tasty no-cook pudding.

Mix chia, cocoa, vanilla, and honey together into a paste. Slowly stir in almond milk and continue to stir until everything is well incorporated. Allow to sit at room temperature for about 20 minutes to make a thin pudding. Place in refrigerator for a few hours if you want a thicker pudding. The longer it sits, the thicker it will get, so you may need to add more almond milk to thin it. 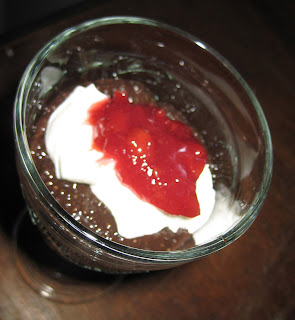 The pudding was quite chocolaty, but since we used almond milk, wasn't as creamy as the chocolate puddings of our youth. I made a parfait with a bit of Fage Greek yogurt, which added some creamy texture, but hell, if you're not watching your cholesterol, whipped cream would be much better!

Keep in mind that chia seeds are, well, seeds. They will not dissolve in liquid, and even though they form a gel, they'll still be crunchy. But they are teeny tiny, so the effect is rather like eating strawberries. Apparently the crunch is lessened if one crushes the seeds, but again, they are tiny, so I'm thinking it's a job for a mortar and pestle and some elbow grease. As for the taste, I've read that they are "nutty." To me they taste kinda "green," but really have little or no flavor. But hey - lots of Omega 3s and no fish burps! That's got to be worth something!