I never thought, when I started Minxeats, that I would end up posting very many vegetarian recipes. But now that meat has necessarily become an endangered species in our house, I've had to resort to making veggies and non-animal proteins the focus at dinnertime. 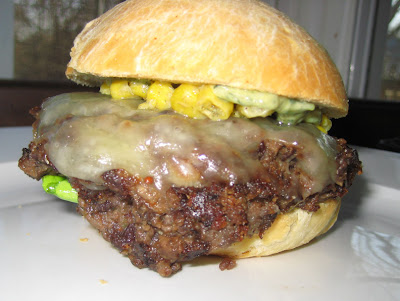 Veggie burgers are one of those things I think of as a vegetarian staple, but I haven't eaten very many. Once in a while we'd buy a box of Boca Burgers, but eventually the fake grill flavor started to remind me of the loathed Burger King, and I gave up on them. Then, sometime last year, I was asked by Baltimore Magazine to write a blurb on Banksy's Café on Falls Road. Their veggie burger is apparently based on a famous burger once served at Ratner's, a Kosher deli in New York, and was extremely soft, rather mashed-potatoey, but also very good. That made me realize that a veggie burger need only be burger-shaped and not really bear any other resemblance to something served up by clowns by the millions every day.

I did a little research on veggie burgers and found that a lot of them involve beans. Over the years, I've discovered that beans and I have a mutual dislike for each other, but occasionally black beans have found their way into my gullet without too much of a struggle. I thought I'd give them a try in burger form, bolstered by mushrooms for texture. Not too much texture though - instead of merely chopping the 'shrooms to allow them to lend their squeaky chew, I minced them in the food processor with some onion, essentially making a duxelles. When mixed with the beans (which also took a trip through the foodpro - hey, it was already dirty and taking up precious counter space), the mushrooms didn't exactly provide the texture I was seeking. However, the mixture, seasoned with a bit of garlic, smoked paprika, and green onion was darn tasty.

And wow - it kinda looked like a big ol' juicy burger, too.

I made my own rolls, using the soft sandwich bread recipe in Artisan Baking in Five Minutes a Day. They tasted fine, but were too crisp for the burgers, which were quite soft and squooshed out the sides at every bite. Mushroom Black Bean Burgers also seemed a bit too exotic for mere ketchup, mustard, or mayo, so I made a bit of basil mayo and some Cambodian lemongrass curry mayo, and a bit of corn relish.

I dare say I will make these again, perhaps adding some chia seed to help with the texture.

Sauté onions and mushrooms in olive oil over medium heat until most of their moisture has evaporated and they become pasty. about 15-20 minutes. Add garlic and cook another 2-3 minutes. Allow to cool.
Puree beans in food processor. Place in bowl and add cooked mushrooms, green onion, paprika, and salt and pepper to taste. Form into cakes. Roll in bread crumbs.

Heat some canola or olive oil in a saute pan over high heat. Add burgers and cook until crisp and browned on bottom. Carefully turn burgers and brown on the other side.

Serve on soft buns with your favorite condiments. Makes 6 burgers. 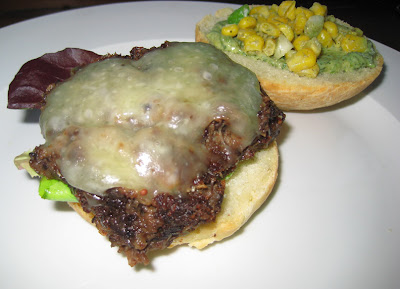