This post is from February 8, 2010. The most expensive burger I ever ate. 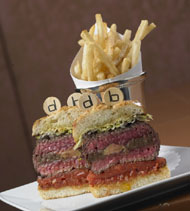 Across from me was a Korean couple speaking in their native tongue. They were well-dressed and she had a huge Louis Vuitton bag parked on the seat next to her. On the other end of the bar (which was really just a tall table for eight) sat the most pretentious threesome I have encountered in quite a while. Two gay men and a woman chatted about nothing at all with an air of importance. They spoke in some weird French/British hybrid accent that sounded exactly like the Maya Rudolph/Fred Armisen Nuni characters on SNL. It was all very superficial and strange, and at one point the woman exclaimed, "I'm so glad to be here with two of my favorite people!" I kinda felt sorry for her at that point.