The Next Food Network Star 6 - Episode 7

As in weeks past, the Food Star Wanna-bes leave their house embedded in a hill to face the day at the Food Star Kitchens. Crest White Strips fan Giada is there with a table full of Kellogg's cereal products. This week's Camera Challenge is going to test the Wanna-bes' ability to relate to the "busy home cook." You know, the moms who are sooooo busy they feed their children sugar-loaded cereal for dinner instead of opening a can of soup. Oh, but I'm not judging. (Yes, I am. You people are the reason that Rachael Ray and Sandra Lee are allowed to exist.)

A prime example of the working mom is last year's Food Star wiener, Melissa d'Arabian. Sometimes she's sooooo busy with her cooking show on the Food Network that her kids have to resort to eating cereal or sometimes even worse - her cheap-ass $10 Dinners. 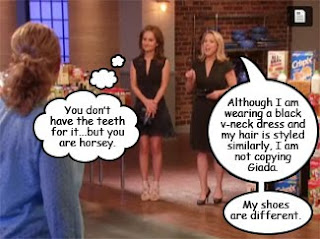 d'Arabian is a fairly normal-sized person. By comparison, she makes Giada look like a stick with balloons taped to it and a giant head. And what is she wearing on her feet? Ace bandages?

Anyhoo, the Wanna-bes draw spoons (spoons!) to see which Kellogg's brand cereal has been assigned to them. Aria gets Crispix®; Aarti gets All-Bran®; Tom gets Corn Flakes®; Herb gets Froot Loops®; Serena gets Cocoa Krispies®; and Brad gets Rice Krispies®. 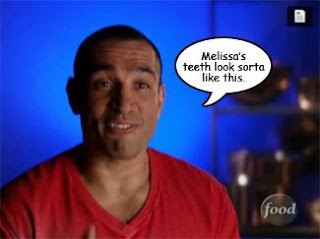 With 20 minutes and a limited pantry, the contestants must make dinner® with breakfast®.

Time's up!® Time to embarrass oneself in front of the camera yet again!

Herb is first. He's changed up his POV. No longer is he the awkward "Energy Chef." Now he's finally embracing his Cuban heritage and is Cocinar con Sabor, or something like that. (I could swear he said "por" sabor, but that's not grammatically correct, is it?) With this change he seems to finally feel comfortable with himself and not only nails the presentation, but he also makes a darn good dish with his Froot Loops®. 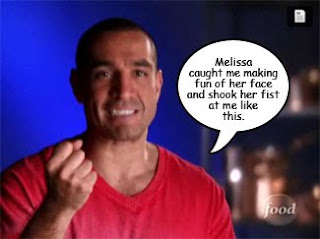 Aarti is next with a fun and informative presentation and tasty food. Serena, on the other hand, is cringe-worthy, coming out with a big tacky "O sole mio!" and going downhill from there. 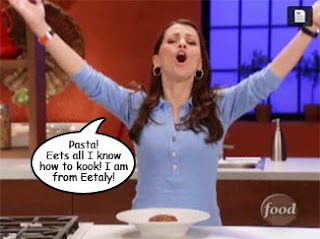 Aria channels Dr Seuss, but in a far less-entertaining manner, by presenting a dish called "Yapple Dapple" or "Hop on Pop Ill" or something like that. She doesn't finish her spiel in time, nor does her mess of a dish taste good. In the first episode of the season, Aria seemed like the one to beat. Now she gets on my nerves.

Tom is another disappointment with a sloppy presentation that seems a bit condescending to the audience. Or maybe he was merely being condescending to Melissa d'Arabian? But his food was tasty. Finally, Brad does a really great dish with the unlikely combo of Rice Krispies® and tuna. It was great because if you took away the cereal, the dish would still work. Unfortunately and typically, his presentation was a bit flat. 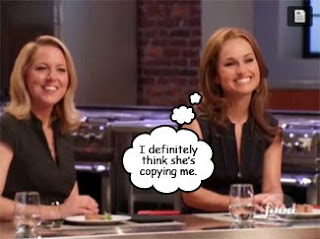 Tom, Serena, and Aria finish on the bottom. Though I thought Herb did a great job, the win goes to Aarti.

Buh-bye to Ms d'Arabian. If I wanted to see your face on TV I'd watch your show. And if the Food Network wanted anyone to watch your show, they'd air it in a better time slot. 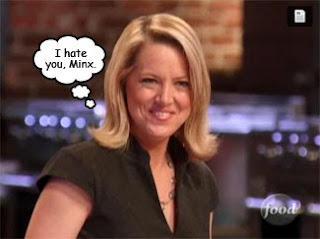 The Wanna-bes head back to the house to do whatever it is people who want to be Food Network Stars do in their off time. (Kiss their reflections in the mirror? Practice being a douchebag? Plan sabotage?) Tom finds a note on the coffee table telling them to get in the van and head to their next venue.

This turns out to be Smog Shoppe, the location of an underground supper club. There they are met by Bobby Flay who tells them they are to work as one team to produce a six-course meal for an "elite group of super foodies." 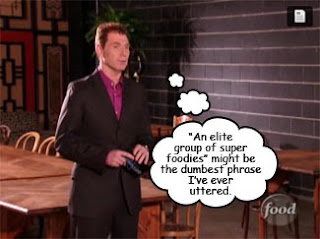 Aarti will act as team leader. They will have $1500 to shop and only one hour to prep their food before the guests arrive, at which point they will cook the courses in order of presentation.

Aria realizes she needs to do something to step up her game. 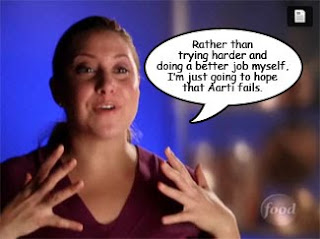 The Wanna-bes then discuss concept. They decide that the theme of the meal will be "My LA" and each will cook something representative of a neighborhood or region of the city.

Back at Smog Shoppe, the contestants start their cooking. Aria is making a soup course, which will be presented first, so she is hurrying. When the time comes to serve, she goes out with Aarti who introduces the meal. Then--shades of Dzintra!--Aria decides to rudely interrupt Aarti, which throws off the whole balance of the intro.

Aria gets hers when the diners decide her carrot soup, representing Santa Monica, was mediocre at best. And they did notice her crude attempt to throw Aarti off balance. 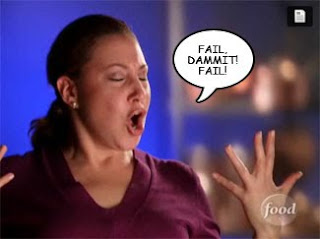 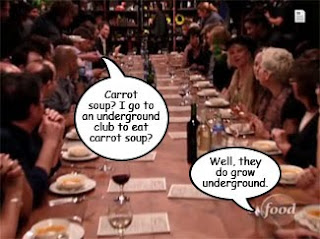 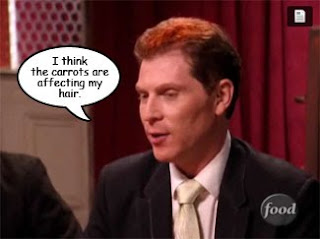 Serena goes next, making yet another dish of pasta which somehow is supposed to represent Beverly Hills. Even the pasta-loving Mr Minx is getting tired of this. Even more tiring is her too-fast, frantic, somewhat garbled presentation. Nobody is impressed. I am counting the minutes until she is asked to leave. 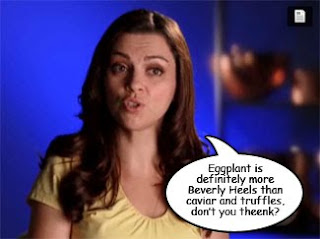 Tom is even less-impressive with his attempt at Asian fusion. He makes black cod with Asian vegetables, but his heavy hand with the soy sauce (that's "sow-ee" to Alton Brown) creates a dish that is characterized by nothing but salt. His presentation, as in the Camera Challenge, is sloppy. Maybe he only looked good in past weeks when compared to Paul?

Meanwhile, back in the kitchen, Brad is making lamb chops to represent downtown LA. His fear of overcooking them leads him to put them on the grill with only 10 minutes left before service. Of course they do not get done in time, so at the very last minute he is cutting the double chops in half and searing them on the grill, with the help of everyone else in the kitchen. Luckily for him, this does the trick and his chops are perfect. Not so his presentation, which falls apart as he loses his train of thought.

The meal finally has a high point with Aarti, whose bubbly presentation and truly good green curry dish for Little India are real stars. 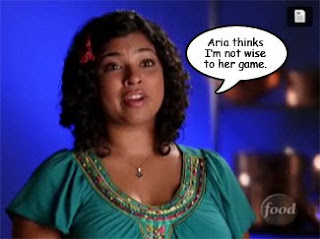 And then we have Herb. He's been working his ass off the whole time - setting the table, acting as expediter and plater for the other Wanna-bes, serving wine. While he's doing all of this, his flan representing the Latino areas of LA is in the oven, overcooking. With his new POV, he's got confidence and his presentation turns out well; the flan, on the other hand, is crap.

Back in front of the Selection Committee, the Wanna-bes are castigated. 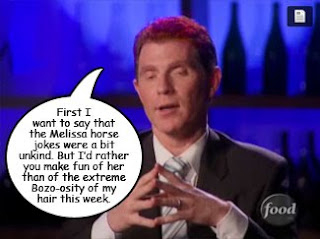 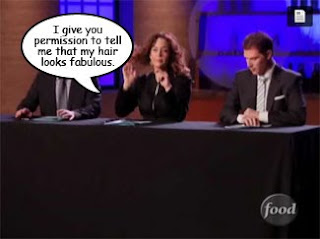 Aria is told that she is falling consistently in the middle of the pack. And Bride of Fogelstein chews her out for not being a team player. 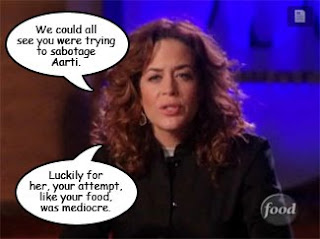 Serena receives the same criticism she's gotten for basically the previous 7 weeks - slow down. Oh, and the pasta thing is getting old.

Tom's cod dish was the "most buzzed about" by the chefs at the table *before* it was served. After that, it fell to the bottom of everyone's list. Herb got chewed out for his flan, which he says his mother would probably slap him for ruining.

Brad escapes extreme criticism because his dish was so good. Surprisingly nobody throws him under the bus by revealing that they were all as responsible for the way his dish turned out as he was.

Not surprisingly, Aarti's nearly flawless performance this week gets her the win. And one-note Serena finally is told to pack her manicotti and go. 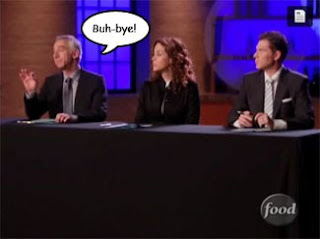 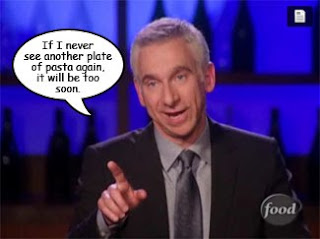 Well, I can't say that. But I'm glad that Serena won't be annoying me next week.
Posted by theminx

Oh my God, I nearly spit out my lunch....this is hilarious!!

This is seriously one of the best blogs I've ever read I love the cartoon dialogue bubbles on the pics. I'm telling everyone I know about this blog. P.S. I told Confounded Cook about it..he just beat me to the punch!

So Funny!! I will say right now that I would not watch Aria's show...I might watch Brad's. Now that I think about it, I have not watched any of the past winners shows. I can't watch "Nasty Guy"

Loved your recap as always! Check out my take of the finalists on my blog! http://missgingergrant.blogspot.com/

Absolutely on point for this episode of NFNS. I find myself disliking Aria more and more as the show goes on. I couldn't believe her stupid little interuption of Aarti during the introduction. That made me want to flick her nose and say, "bad dog!"

I am a fan of Brad, but that's mostly because he's cute and can cook. I don't know what his show would be, but when he nails it, he nails it. I loved the Sinatra challenge for him, and I think he could be really good in front of the camera - if he acted like he does in confessionals and not in the challenges.

Aarti would have a show I'd watch, simply because I know so little about Indian food. I don't recall if she's done anything other than Indian food on the NFNS, though.

Serena was annoying. I lived in Italy for a while, and Italians do speak fast, but she was just TOO fast. I'm glad she's gone.

Herb redeemed himself this week for me. Go Herb! I'd even consider watching his show. Consider being the key term.

And last year's winner - don't even remember her at all. Guess it shows that winning this show doesn't mean you're really a star.

Can't wait to read your next recap!