Recently we were pleased to note that Comcast Cable is offering a couple of new channels to their basic cable subscribers, one of which is Scripps' new venture, Cooking Channel. From the many ads we've seen on the Food Network, Cooking Channel seems to feature actual cooking shows, many of which come from FN archives. In addition to Emeril Live, Molto Mario, and Food 911, there are new shows like Food Jammers and Indian Food Made Easy. One show I've managed to catch twice so far is the boozefest called Drink Up.

From one episode, I learned there are basically only two kinds of beer: lager and ale. Everything else is either a lager (long fermentation) or an ale (quick fermentation). And a second episode taught me that host Darryl Robinson can't pronounce vodka. He says, "vokka," which hurts this Pole's ears. The word is properly pronounced "voodh' ka" (and spelled with a w, as there is no letter v in the Polish alphabet). Vodka means "little water" in Polish and Russian (voda being water), signifying its very important place within these Slavic cultures. In fact, it's almost a health food. Most people know that the proper thing to say when one is drinking vodka is "nas drowie!" (or "nas drovia" for the Russians). This phrase does not mean "cheers," nor does it mean "down the hatch" or "to life," but literally, "to our health" (because nobody should be drinking alone)!

Despite its "healthful" properties, we seldom had vodka in the house - we weren't what Grandma would call pijaki (drunks) even though she did make her own wine (!). Today, both the mister and I have an appreciation for the clear spirit and there's usually a bottle or two at Casa Minx, ready to be made into martinis or turn basically any other liquid into a quick cocktail.

When Robinson's guest for the "vokka" episode, bartender Jeremy Thompson, demonstrated a drink made with fresh tarragon, I paid attention. Our tarragon plant (indeed, our entire container garden) is a bit out-of-control and the Siberian Sling seemed like the ideal way to use some of the herb. 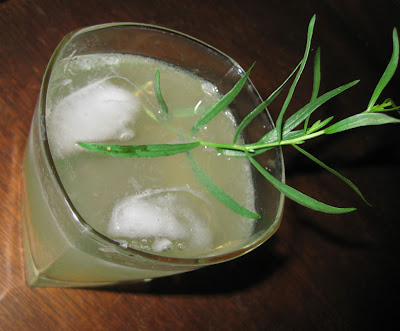 Vodka always reminds me of a song my Grandma used to sing when I was a girl. That was a long time ago, and I don't know the name of the song, but I can still remember one line in particular:


"śmiej się Griszka, zajrzyj do kieliszka, wódka lepsza od dziewczyny, bo nie zdradzi cię"
"Griszka laugh, look at the glass, vodka is better than girls, because it did not betray you."
Unless of course you drink too much. Pijak. :)
Posted by theminx

Ah, but in Russian, vodka is spelled with a V because there is no W in Russian. (Yes, the V looks like a B to us, but it's still a V.)