For dinner last night, I knew I wanted to do something with the head of cauliflower that had been sitting in the fridge for a week, but what? I looked through a couple of cookbooks and came up with this simple-yet-fussy recipe for cauliflower soup from Rocco DiSpirito.

It's simple because the actual soup part consists only of onion, cauliflower, water, and a little oil, salt, and pepper. After a whir in the blender, it's a creamy yet cream-less concoction with good flavor and a silky texture. If one omitted the oil (and sweated the onions in a little cooking spray) and used chicken stock to add flavor instead, the dish could be practically fat free. Perfect for those of us who are trying to lose a couple of pounds in the new year.

The fussy part comes in to play with the garnishes - basil syrup and fried pine nuts, the oil of which is added to the syrup to flavor it further. They make for pretty garnishes, to be sure, but I wouldn't be above adding a few leaves of fresh basil to the soup before pureeing, with maybe a touch of sugar. And there's no need to fry the nuts - I toasted them in the microwave so as not to dirty another pan. 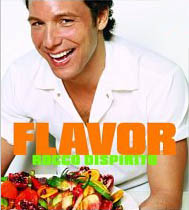 Heat oil in a large soup pot over low heat. Add onions, season with salt and pepper, cover pan, and sweat onions for ten minutes. Add the cauliflower, season, and stir well to coat. Increase heat to medium and cook uncovered for another 10 minutes, stirring frequently. Add a quart of water and increase the heat to high. When the water boils, reduce the heat so that the soup simmers. Simmer for 20 minutes or until the cauliflower is very tender.

Turn off heat and let cool, unless you want to burn yourself in this next step. Transfer to a blender in batches and puree until smooth. Return pureed soup back to the soup pot.

Put the walnuts or pine nuts on a paper towel and microwave, uncovered, for one minute. You want these to get toasty, and if one minute doesn't do it, microwave for another minute, then add increments of 30 seconds, until the nuts are aromatic but not burnt. Spray with a little PAM and toss with salt, pepper, and coriander. Set aside.

The original recipe called for a rather fussy basil syrup made by blanching fresh basil and then pureeing it with simple syrup. That's fine if you want to do that, but I didn't have fresh basil, nor did I feel like making a syrup. I did have a tube of that Gourmet Garden basil stuff in the fridge and mixed it with some honey and some olive oil. I wasn't sold on the combination of sugary basil and cauliflower to begin with, so this was about all the investment I was going to make on this component.

When ready to serve, heat the soup (but do not boil). Ladle into bowls. Drizzle a few spoons of basil syrup (if you've done that step) on top and pile some nuts on top. Serve hot. 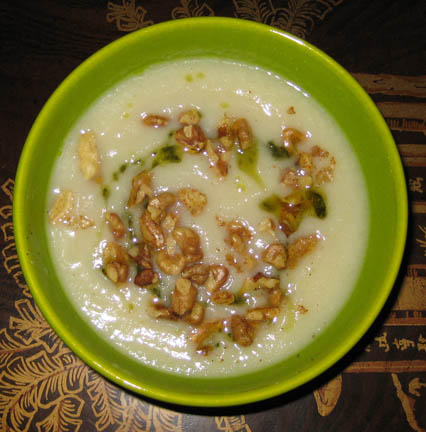 The basil was an interesting touch, but I'm still not sold on the syrup idea. The nuts are pretty essential, however, as they give the smooth soup some much-needed texture. Because it is so easy, I am very inclined to make the basic soup again, perhaps adding other ingredients or flavors. Let me know if you try it. :)
Posted by theminx

Thank you for taking the Meatless Monday pledge! This cauliflower soup looks like it has that creamy texture without actually adding cream, which is always a good thing. And the basil syrup sounds interesting, but at least it adds some nice color to the dish!

Leaving out the meat one day a week is good for your health and the environment because it reduces your risk of chronic preventable conditions while reducing your carbon footprint at the same time. That’s why I work for Meatless Monday. Many supporters of Meatless Monday like to feature videos, pictures, or recipes on their blogs of meatless meals that they’ve made. If you’re interested in doing weekly Meatless Monday posts, please email me at MeatlessMondayBlogs@gmail.com. Thanks!