I had just finished reading a selection about steak from Jeffrey Steingarten's It Must Have Been Something I Ate moments before Mr Minx and I went on our weekly trip to the grocery store. I was in the mood for red meat and though I knew from my reading that no cut of supermarket beef would be particularly satisfying, I threw a package of cheap bone-in "strip steaks" into the cart. (I use the quotes because judging by the shape and placement of the bone, they were only strip steaks by virtue of their long and narrow form.)
They were fried up in butter with some mushrooms and served with sliced potatoes cooked in duck fat. Yes, I said duck fat - we had about a cup of it leftover from Christmas dinner. OMG yum. Especially when the potatoes are dusted with a little Cajun seasoning (a.k.a homemade Emeril's Essence).
The steak itself, although lean, tasted well enough. It satisfied the urge to chew, but was gristle-free, unlike the NY strips we had at Ruth's Chris earlier in the year. 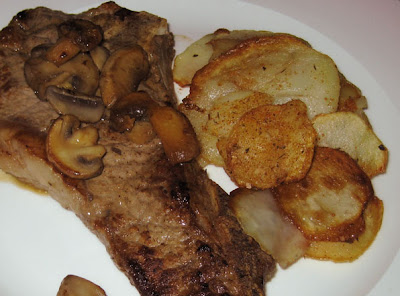 I also whipped up a little "steak sauce" with a bit of black bbq sauce and Worcestershire.
We prefaced this meaty meal with bowls of parsnip velouté. Not really velouté because there was no flour in it, but I just like saying the word. Velouté. Parsnips are my new favorite root vegetable and I want to put them in everything. Including velouté.
The recipe? I peeled three huge parsnips and cut them into chunks, placed the chunks in a pot with about 3 cups of water and one Knorr chicken bouillon cube and cooked them until tender. After it cooled, I pureed the lot of it in a blender, adding about a cup of milk (we had 1%) to assist in the blending. The puree went back into the pot with a scant cup of light cream, another cup of water, and another half bouillon cube. (If you have chicken stock on hand, by all means, use it! I had none.) Add more or less water and cream depending on the consistency you want to achieve. Taste for seasoning and add salt if needed (mine needed no further seasoning). 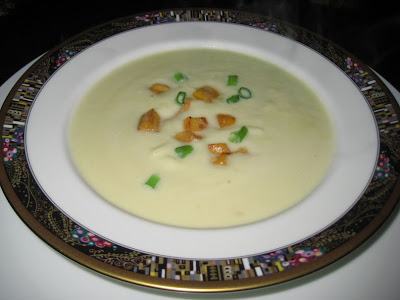 I just so happened to have some diced, sauteed parsnip from a Petit Louis doggie bag, so that became my garnish, along with a few bits of scallion. Later in the week, I'll garnish the leftover soup with some bacon.
Ok - maybe "meat and root vegetables" would have been a better title for this post....
Posted by theminx

I'm currently obsessed with parsnips and celery root. Just made the Chicken and Dumplings Soup from Michael Symon's book. The dumplings have fresh tarragon in them. Very good.