We had an open package of thick-cut bacon in the fridge that we had to use up over the weekend. Two ripe tomatoes suggested BLTs, but I didn't want to use up Mr Minx's weekday lunch bread. Digging around in the pantry revealed a package of gnocchi, so I went the pasta route, bringing no arguments from the Pasta Fiend.

While the bacon cooked, I chopped about 1/3 of the huge sweet onion we had in the fridge and cut up some baby spinach. (It's so nice to be married to someone who has an interest in cooking. As I was explaining to Mr Minx what I intended to do for dinner, I had a brain cramp and couldn't think of a particular word. I mimed rolling something with my fingers, then made a small chopping motion with my hand. He said, "chiffonade?" which of course is exactly what I meant.)

I removed the bacon from the pan to a paper-towel-lined plate. I reserved about a tablespoon of the fat and tossed in the onions and a handful of sliced mushrooms (there is always - always - a box of mushrooms in our fridge), cooking them down until they were quite brown and soft. I wanted to emphasize the smokiness of the bacon, so added a bare pinch of smoked kosher salt (the stuff is *very* smoky), plus some aleppo pepper and a crushed clove of garlic. The gnocchi were quickly cooked in boiling water, then added to the onion mixture along with the chiffonade of spinach and some of the bacon, cut into pieces. A couple of quick tosses to wilt the spinach and coat everything in bacon grease et voila! Dinner. 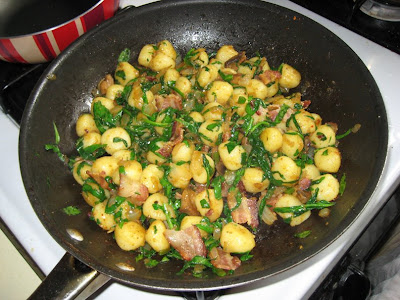 Yes, it was gooood.
Posted by theminx

Gnocchi is my absolute favorite pasta - and you can't go wrong with bacon.