I've mentioned here before that my favorite brownie recipe is on the back of a can of Ghirardelli Sweet Chocolate and Cocoa; it's sweet and rich and extra chocolate-y. I had a hankering for baked goods last week and Mr Minx suggested I make brownies, so out came the can of Ghirardelli. And what did I do? I messed up the recipe. I usually make a double batch, but this time I planned to make half as much. But...I used the same 2 cup measurement as always and after dumping in the remains of the chocolate and grabbing a can of Hershey's to make up the difference, I realized what I had done. Oops! I put back the 9" square pan and broke out the 9" x 13" instead.... (Not that too many brownies is ever a bad thing!)

I didn't feel like using up another whole stick of butter and 2 more eggs, so I added 1/2 stick and 1 more egg. I also goofed on the flour measurement and ended up using slightly less than twice as much. In the end, the brownies came out about pretty close to the original, albeit slightly less gooey in the center (a good thing - I like gooey, but sometimes the centers were a bit too wet). Actually, these were the best brownies yet!

Grease a 8x8 inch baking pan and set aside. Preheat oven to 400 degrees. In a medium bowl stir together eggs, sugar and vanilla. Add butter and stir well. Sift the ground chocolate with the flour, baking powder and salt. Stir into the egg mixture and add the walnuts and chocolate chips. Spread into the prepared baking pan and bake for 25-30 minutes. 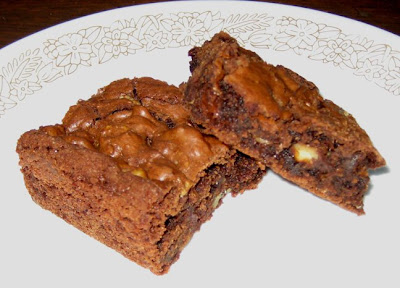