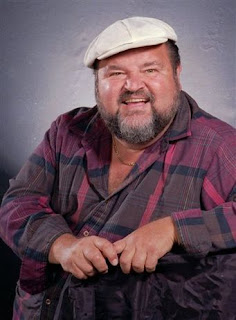 I've long been a fan of Dom Deluise, a man who was not only funny, but also a man who liked to eat. He was even the doppelganger of New Orleans chef Paul Prudhomme.
Mr Deluise died last night at the age of 75, suffering from kidney failure and respiratory problems, among other things, no doubt in part due to his love of food.
It seems fitting to celebrate the famously-obese comedian and cookbook author by sharing one of his recipes.

In a small saucepan, melt chocolate chips in the coffee over very low heat. Remove pan from heat. Beat in butter, 1 tablespoon at a time, until smooth. Set pan in bowl of ice and beat until icing is spreadable and holds its shape.
Posted by theminx

Lord save his soul ...
I just learned that Dom DeLuise-died last night in a Los Angeles hospital.
He was 75.
The history of life:Dom DeLuise-FILM

Thanks for DD's recipe.
That's one way he'll live on.

Now I need to find my cchips!