Note: I always have fun writing somewhat snarky posts. Milan closed a few years ago.
-----------------------------------------
Earlier in the year I paid $39 for a Travelzoo voucher worth $129 at Milan. Other local bloggers had an opportunity to eat there for free shortly after the restaurant opened in early 2010. From photos and descriptions of the place, Milan seemed rather high-concept for Little Italy, and I wasn't sure such a place would make it in that neighborhood. I was still curious to try it out, so we paid a visit toward the end of May.

Wow. Where should I begin?

I'll begin with first impressions. Stepping into the restaurant, I was immediately struck by a smell. No, not of garlic and shellfish, nor of long-simmered tomato sauce, but of bathroom. A nasty chlorine+potty smell. Granted, we were the first people in the restaurant, and possibly when there are more people in the place and the kitchen is in full swing, the smell isn't noticeable. But it's really off-putting for that to be the first sensation encountered. (I eventually got used to it.)

Once upstairs on the main floor, I saw that the glossy veneer from two years ago, when the restaurant was new, has faded. The black paint on the wood floor is worn off in paths, the paint on the ceiling has bubbled and cracked, and the tables and chairs show wear. One of the high-backed chairs, which doesn't quite match the others, is patched up with white tape. I'm guessing that the intended effect of the stark white decor with touches of scarlet is "modern" and "classy." And I suppose it is. Classy like a strip club with bottle service. It's a place where Pauly D and The Situation would be completely at ease, hanging out one on of the lounges covered with upholstery straight out of a '72 Nova.

We were greeted by a tiny woman with masses of long black hair. She was wearing a skin-tight, very short skirt and sleeveless top, looking more like a nightclub patron than a restaurant hostess. Turns out she was our waitress. And the other waitresses in the place were similarly attired. Call me old, but I find it tacky when people who are serving food are required to be sexed up in that way. Were the place truly classy, the servers would be wearing crisp white or black button-down shirts and dark trousers, perhaps with a long apron. But maybe that's just me.

Recently there's been some stink in Little Italy about how Milan is really a nightclub and not a restaurant. And the neighborhood, largely residential, is not zoned for such an enterprise. Nor, I imagine, do the residents look favorably upon the noise, or the clientele. And I can understand completely.

Enough with the bad stuff. Let's move to the food, which is the only thing I'm (somewhat) qualified to judge.

We ordered from a special menu that listed two salads, two appetizers, and a handful of entrees. Despite the limited choices, I was glad to see that we were not given the regular menu, on which the prices are annoyingly expressed in Euros as well as dollars. For absolutely no reason at all. I wish I had written things down in more detail, because I don't think the menu descriptions were accurate. Doesn't matter, really. The food was good, starting with the plate of crostini served with a warm dip of fiercely-garlicky seasoned olive oil, a bagna cauda.

Salads came next. Mr Minx chose the more simple green salad, and I had the Cesare Diablo. Here's where the menu descriptions come in question.

We think the menu said Mr Minx's salad came with dried cherries, but they were clearly dried cranberries. No biggie. My salad, however, had the word "diablo" in the name. Not reading the description fully led me to believe that the dressing would be spicy, but it was not. The online menu gives the impression that there should have been deviled eggs with the salad, but there were none. So I'm still trying to figure out that whole "diablo" thing.

Clearly, however, the salad did not need those ugly winter tomatoes. That said, I appreciate that Mr Minx's green salad had been carefully dressed in the kitchen with a perfect amount of creamy herbal dressing. My salad had been composed, so the drizzle of dressing on top was fine. As long as the dressing is not on the side, I'm happy. And the flavors of both were really pretty good.

For our appetizers, Mr Minx had a small wedge of crisp polenta topped with a chunk of mild Italian sausage on a plate drizzled with three sauces: a creamy red pepper sauce, one flavored with balsamic vinegar, and another with basil. It looked pretty and tasted very good. We couldn't really figure out how the polenta was so crispy yet had no color other than the brilliant yellow of cornmeal.


My calamari was scented with Old Bay, but really didn't taste of it. The puffy little rings were lightly battered and perfectly cooked, and I preferred them dipped in the leftover bagna cauda than in the light marinara that came with it.
Two good courses so far. And then we received a bizarre intermezzo. Rather than the usual palate-cleansing bit of tart sorbet, we received shot glasses filled with palate-coating pink whipped cream and a few bits of strawberry. It actually tasted pretty good, despite being super-sweet, but would have made a better dessert.
Mr Minx had chosen ravioli for his entree, and he was presented with a long platter of what appeared to be lasagna noodles covered in an unfortunate-looking sauce. The restaurant manager, who had been hovering nearby the whole time, stated that the ravioli were "deconstructed." Ok. In any case, the noodles were layered with bits of sundried tomato, basil, and bits and bobs of grilled chicken. The sauce, which I expected to taste like Thousand Island, was extremely rich and pretty much tomato-flavored heavy cream. That's not a bad thing, necessarily. It was a bit too much for me, but hubby happily scarfed it up. 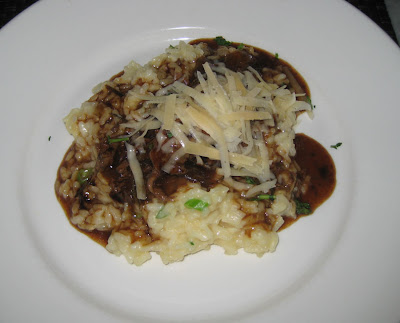 My entree was a risotto topped with chunks of meltingly-tender lamb and soft slabs of onion in a savory gravy and a goodly amount of shaved parmesan cheese. The risotto was a little clumpy, but then so is mine. I really enjoyed the stew-like topping and wished there was more of it, but it was just as well - after a generous sample of Mr Minx's dish, I couldn't finish my own.

Dessert was forgettable. My cheesecake, served on a plate that seemed to be decorated with a melted version of the strawberry intermezzo, was fluffy and fine, but hubby's chocolate cake was terrible. Clearly obtained from a commercial bakery, it was cloyingly sweet and even a bit crunchy from excess sugar. It tasted more of chemicals than chocolate. Also included in the price of the meal were two glasses of wine apiece, which translated to two servings of about two ounces of unremarkable swill.

At the end of the meal, we were presented with a tab for $2.49, which included .15 sales tax. I didn't understand it, considering that my voucher stated that the meal included all food and beverages, but I left a couple of bucks extra on the table with the tip to take care of it.

So. I really don't know what to think about Milan. The food we ate was mostly pretty good. If you take away the sweet stuff, it was really good. Our server was quite lovely, very attentive, and I felt bad that she had to lug such heavy plates out of the kitchen, considering her wee size. The decor was, to me, sad, and out of place in the neighborhood. Perhaps if the restaurant had been set up a few blocks to the south, in Harbor East, and if the furnishings were a bit more expensive-looking, Milan could compete with Pazo for an audience of hip and pretty people who like to eat.

As we were headed out the door, we noticed what looked to be a somewhat grizzled neighborhood guy sitting at the bar. A young couple with a toddler were waiting to be seated. These are the people who frequent (and live in) Little Italy, and the people that Milan should be catering to. If they want to be a dance club, they should probably move elsewhere. If they're going to stay, they should keep the chef, get rid of the rickety tables and the bottle service, and for god's sake, switch to a lemon-scented bathroom cleaner.