Fleming's Prime Steakhouse and Wine Bar was one of the first restaurants to appear in the Harbor East development at the end of the last century. A great deal has changed in the now bustling location, but the bar menu for the elegant steakhouse had largely stayed the same over the last 20 years. Feeling that it was time for a bit of a facelift, Fleming's has introduced a host of new items to their bar menu for the patrons who wish to have a drink and a bite rather than a full dinner. We were invited to sample some of these new items.

We started off with some breaded and deep fried Casteveltrano olives. Unlike a lot of olives which can be mushy and salty, Casteveltrano olives are firm, mild, and bright green in color. When served with a deep fried crust and a spicy dipping sauce, they can be quite addictive. We also had candied bacon which was sweet, salty, crispy, and smoky all at once. The Minx said she could make a meal out of these two snacks and a cocktail. 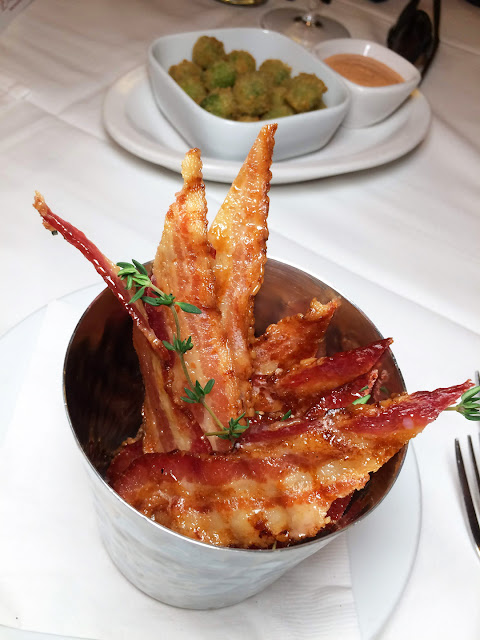 Fleming's understands that some customers may go meatless, so they have added some vegetarian dishes to their menu, like this vegetable tempura that included asparagus, portobello mushroom, and red pepper fried in a light batter. And for those who would like a little protein with their tempura, Fleming's also offers the Colossal Shrimp Tempura with U10 shrimp served alongside some of the vegetable items. An agrodolce dipping sauce is included on the side. 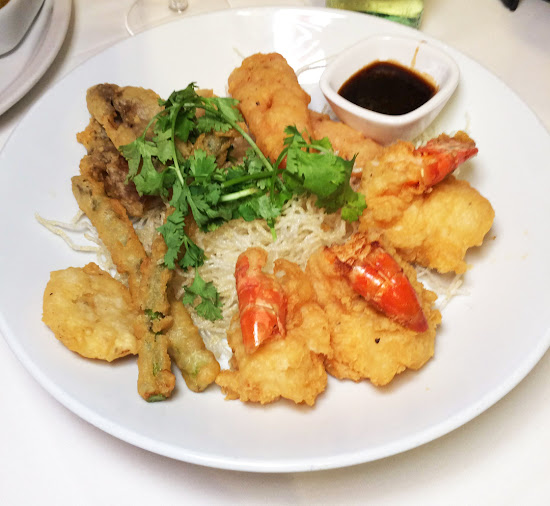 Also available for the vegetarian minded is the Mushroom-Farro burger. Vegetarian burgers by nature tend to be softer in texture than beef burgers, but the combination of mushroom, chick pea, and farro in this patty provides a burger that is firm enough to stand up to its toppings. Those toppings include goat cheese, arugula, campari tomato, and a French-fried onion ring. Although I knew we had more food to try, I couldn't help myself and finished the whole burger. By the way, all burgers are served with a side of French fries and some of those fried Casteveltrano olives. 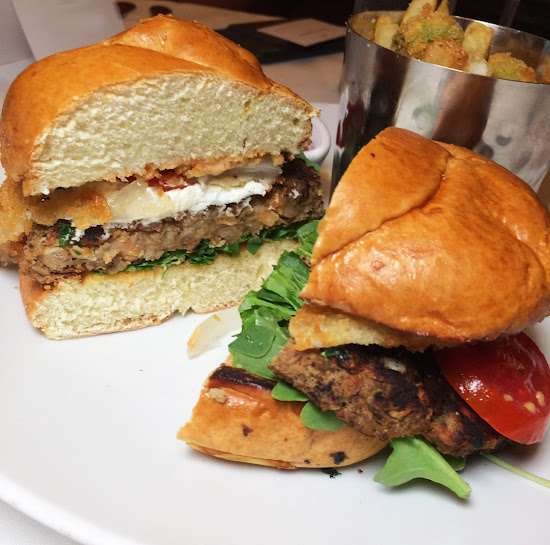 We also tried their California burger which starts with a prime beef patty that's nicely grilled on the outside and perfectly pink on the inside. On top of that is tomato, arugula, bacon, avocado, cheddar cheese, and a smoked jalapano aioli. The toppings provide a great mix of flavors and textures, but the taste of the burger is not lost. 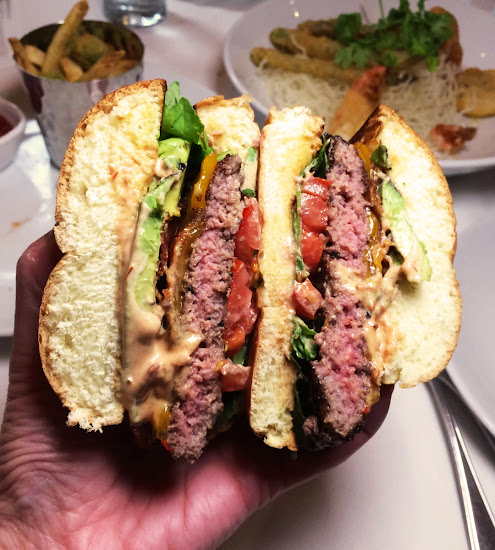 Since my grandfather was English, I've always been a fan of lamb, so I was looking forward to trying their grilled lamb lollipops. They did not disappoint with their grilled outer crust and moist, tender meat within. They were served on a bed of tomato, arugula, Casteveltrano olives, and herbed goat cheese. 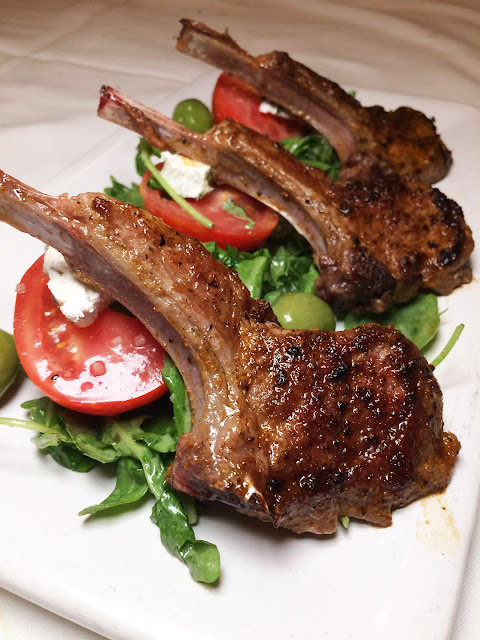 Since this is a steakhouse after all, we had to try the filet mignon on potato waffles. I was concerned that the potato waffles might be too soft, but they actually had a crisp exterior like regular waffles and savory, fluffy potato inside. The filet mignon was perfectly medium rare and quite tender. The drizzle of demi glace over the top added just the right finishing touch. 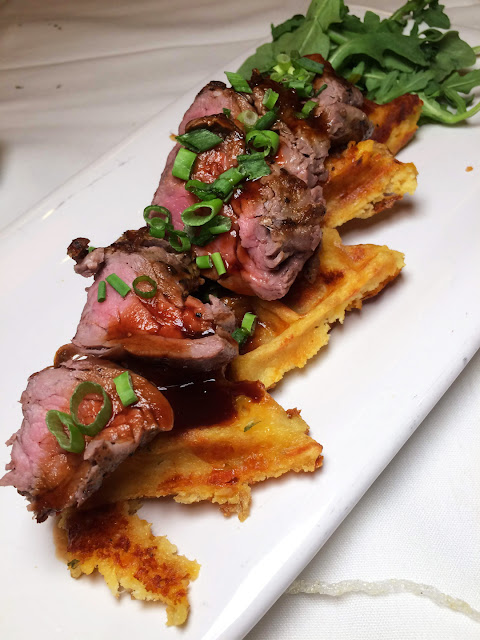 While not technically part of the new bar menu, we were invited to try some of Fleming's dessert items. Chef Ty's key lime tart was definitely a winner, but our favorite was the molten chocolate lava cake served with ice cream and a delicate, crispy tuile. When we cut into the fluffy cake, a river of melted genache oozed out. The combination of the warm cake and cold ice cream was delightful. 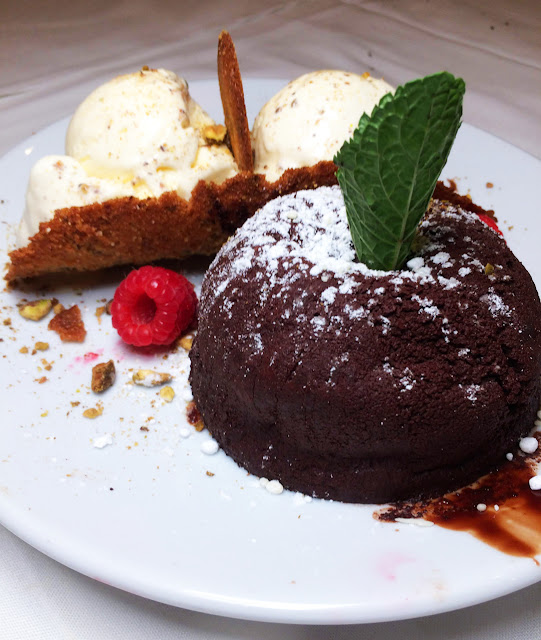 We've gone to Fleming's in the past for special occasions like birthdays, but after sampling their new bar menu, I can see ourselves stopping by just to sit at the bar and enjoy some of these well-crafted  dishes along with one (or three) of their signature cocktails.