I went to New York earlier this month for Fashion Week, and of course I made sure to eat well.

My hotel was in Koreatown, on 32nd Street between 5th and Broadway, and on both sides and across the street were tons of great dining options. I would have been quite content to eat Korean food for every meal, however, as I was getting my makeup done a couple of times during my stay, I didn't want to offend the poor makeup artists with garlic breath. So I indulged in the spicy garlicky fare just once, and that will be outlined in a separate post.

On the day I arrived, I wasn't able to eat anything until late in the afternoon. I was backstage at the John Paul Ataker show, watching Charlie Price's team do hair. There was food and drink, but as a guest and a blogger, I wouldn't think of indulging in something that clearly was not intended for my consumption. (I am sure there are others who would have no compunction about digging in.) After I left the Pier 59 Studios, I checked into my hotel and decided, since it was still light out, to hop a train up to Bergdorf's to do some perfume sniffing (my second thing to do in NY, after eating). The Plaza Hotel and its food court were standing in between the subway stop and BG, so I ducked inside to have a bite to eat.

I had read things about No. 7 Sub labeling it the "mad scientist of sandwiches," mostly because the fillings are somewhat unorthodox. I decided to try the zucchini parm, which Complex.com named as one of NY's best sandwiches in 2013. 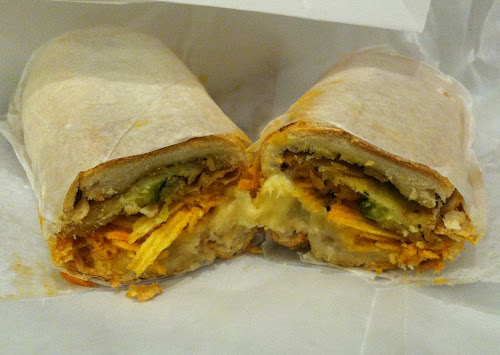 A combo of panko-coated zucchini, fontina cheese, sweet onion puree, bbq chips, and pickled jalapenos, it was indeed unorthodox. "If you don't like this sandwich, you're not human," says the Complex article. Well, I may be a little inhuman then. It's not that I didn't like it, but that the components weren't particularly balanced. There was far too much panko and potato chip (and bread) and not enough zucchini or cheese. The moisture ratio was a bit off. The jalapenos were fine though; I definitely could taste those. 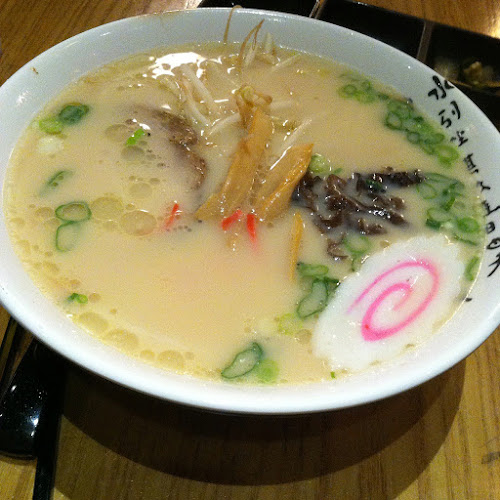 For dinner, I ducked into a "Japanese Pub" on 32nd Street called Hana Michi. I put pub in quotes because it didn't really have what I think of as typical izakaya food. Instead, they had a selection of fancy western-style sushi rolls, katsu dishes, hot pots, teriyaki, and both rice and soup dishes. The place was packed and quite lively and the food there is probably pretty decent, judging by the happy patrons. I obviously ordered badly. It was freaking cold outside, and windy, so I thought a nice bowl of ramen would hit the spot. As you can see from the pic, it wasn't very attractive ramen. There was too much broth, and it was rather insipid in flavor. It looked like tonkotsu, but it tasted like not much at all. And the noodles were overcooked. But the Asahi Super Dry that I drank with it hit the spot and both kept me warm on my short trip down the block to my hotel. 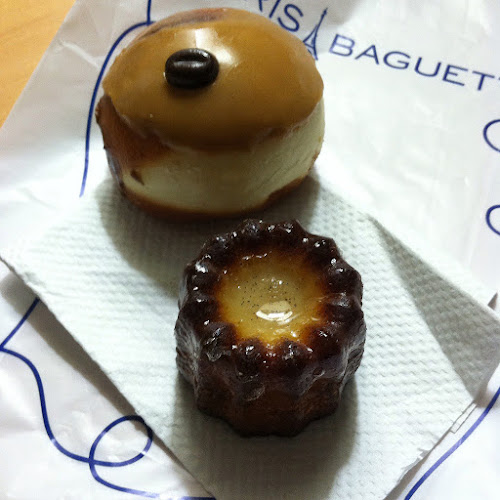 My dessert was much better. There's a Paris Baguette right next door to the hotel, so I stopped into the Korean bakery chain and picked up a canele and a bomboloni with coffee cream. The canele was not typically crisp on the outside; it was quite custardy-textured and pretty tasty. The bomboloni (an Italian donut) was fresh and cream-filled and not too sweet. While not the best or most authentic French bakery in NY, I have always found Paris Baguette to be pretty satisfying. 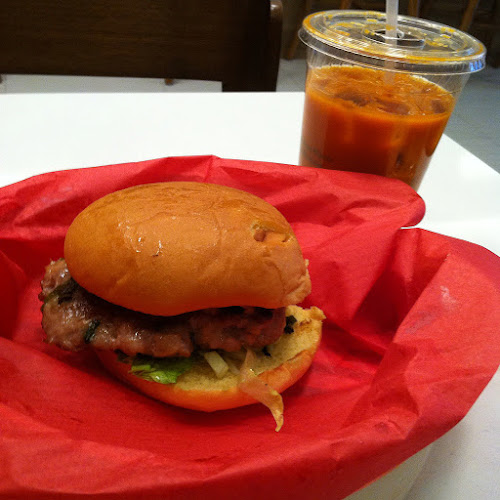 The next day, I skipped breakfast, opting instead for a simple flat white at Starbucks before heading to get my makeup done at Caravan Studios at the Gregory Hotel, a couple blocks from my hotel. I ducked back to the room to drop off a bottle of crappy fizzy drink that was the lounge's only freebie, and then set out for lunch. I had scouted out several options around the corner on 5th Ave. Uncle Sam's Burgers, the first US outpost of a burger chain from Beijing, won this round. I didn't feel like eating a beef burger, but the "dim sum" burger of ground shrimp and pork caught my eye. Topped with shiitake mushrooms, lettuce, and house sauce, it was indeed reminiscent of a dumpling filling. Pretty tasty, although it definitely needed more salt. The Thai iced tea on the side was perfect. 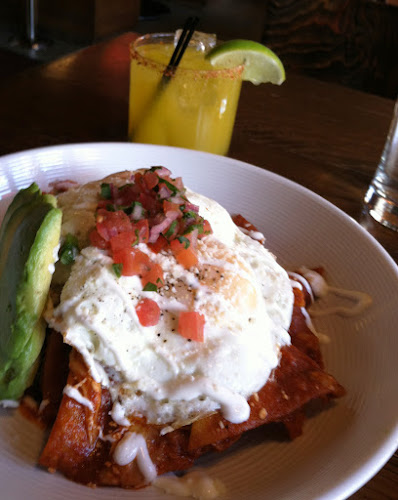 The next day, my big meal was brunch. I'm not a brunch gal, and I certainly don't routinely eat brunch alone. But, as it was Saturday and I had to get out of my hotel and down to the West Village/SoHo area early, I made a reservation at El Toro Blanco. Out of all the various places that serve weekend brunch in that area, ETB's menu seemed most interesting (and affordable). I opted for the chilaquiles, described as "baked saucy nachos, guajillo salsa, fried eggs, melted Mexican cheese, crema, avocado, pico de gallo." It was good. The eggs were perfect-- no crunchy brown bits and plenty of gooey yolk--and there was just enough cheese and salsa-coated chips to please. I had a margarita called a Chile Rubbed Mango (tequila, mango, cilantro, habanero, lime, agave) on the side. (Yes, it was 10:30 am. Don't judge.) The habanero was in the salty rim, and it added a nice punch, but wasn't noticeable at all when I used the straw. Not bad, but could have been spicier and fruitier.

So that's most of what I ate in NY for Fashion Week, minus a small Pinkberry grapefruit yogurt with pink grapefruit, coconut, and those tasty little mango pearls, and the fab dinner I had at Gaonnuri. The latter will be in an upcoming post, so stay tuned.