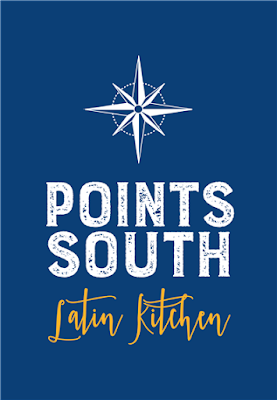 Last week at a fun VIP party, we got a sneak peek at Bryson Keen's new Fells Point restaurant, Points South Latin Kitchen. One might remember Bryson from his 10 years as the very visible managing partner at Roy's Hawaiian Fusion, where he not only kept the place in tip top running order, but also led the very fun wine dinners that we attended from time to time. Bryson grew up around Latin cuisine; his grandmother owned a Tex-Mex restaurant in Fort Worth. We had high hopes for a fine eating experience at Points South, and our experience so far has been very good.

As we explored the newly revamped space (formerly home to both Meli and Anastasia) we enjoyed white and red sangria and selections from the restaurant's menu. Both kinds of pinchos, beef and shrimp, were among the passed appetizers that also included patacones (fried green plantain chips) topped with dollops of the Yucatecan toasted pumpkin seed dip known as Sikil Pak, and a meatless version of their carimanolas (yucca croquettes). Later, we were treated to a buffet that included grilled steak with Argentinean chimichurri, rice and beans, chicharrones of pork belly, and several salads.

We're hoping to go back sometime soon to have a real sit-down dinner and will keep you posted.