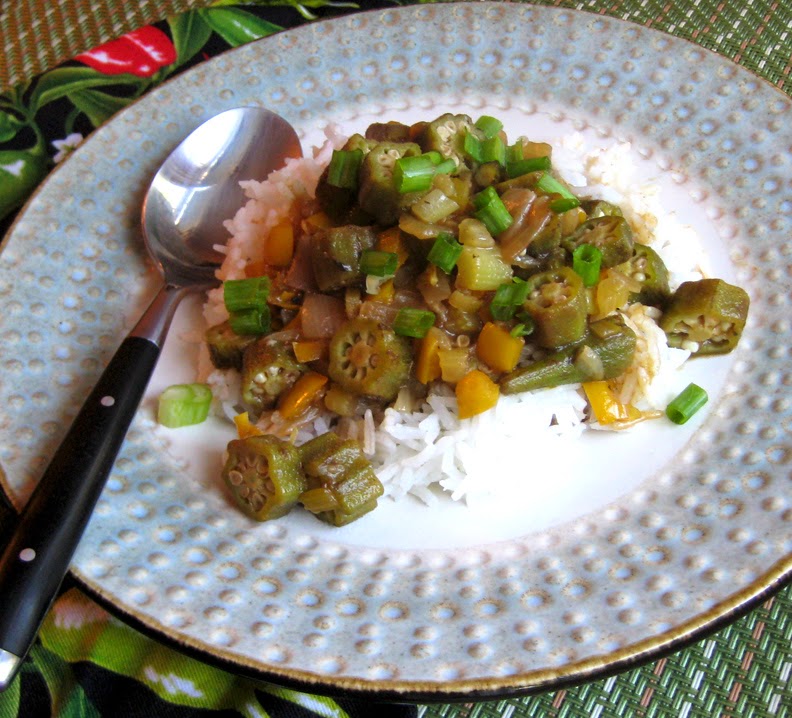 Who doesn't like okra? So delicious! I know, right?

Wait. You say you don't like okra? What? And neither do you, or you, or you?

Poor okra doesn't seem to have many friends. But I love it, and so does Mr Minx. Yeah yeah, I can hear you whining now, "it's slimy! ewwww!" Shut up. It's not slimy at all if you cook it correctly. And it tastes great, a little like green beans, I think.

So we had this huge bag of okra from the CSA, and it was going to go bad if we didn't use it up pronto. I decided we should make an okra etouffee, so consulted teh Innernets for a recipe. Just about every one I found involved dumping okra in a casserole, covering it with tomatoes, and then baking it. No, no, no...I wanted an etouffee recipe, like crawfish etouffee or shrimp etouffee. Stuff smothered in a roux-based sauce. Not just stuff smothered with other stuff. So I threw one together based on an old crawfish etouffee recipe I've used in the past. Roux + trinity + stock and seasonings. Add okra, simmer for a while et voila! Okra Etouffee.

Melt butter in a large pot. Add the flour and open the windows. Stir flour and butter together over medium-high heat until the mixture is medium-dark brown, a bit darker than peanut butter. It will smoke, but as long as you are stirring constantly and watching it like a hawk, it should not burn. Once the roux reaches a nice brown shade, dump in the onion, bell pepper, and celery. Inhale deeply, for the scent of trinity cooking in roux is one of the best cooking scents there is. Stir the vegetables and roux until veg are completely coated. Turn the heat down to medium, add a big pinch of salt, and cover the pot. Allow the vegetables to soften, stirring occasionally, about 10 minutes.

Add the garlic, Cajun seasoning, chicken stock, and bay leaf and bring to a boil. Stir in the okra. Cook over medium heat for 25-30 minutes, until okra is tender. Taste for seasoning and add salt and pepper, more Cajun seasoning, a bit of hot sauce, whatever floats your boat.

Serve over white rice and garnish with chopped scallions.