Baltimore is always a few (or more) years behind current restaurant trends; at least we are still unmatched in the crab cake department. The ramen craze has finally hit at long last and Ejji Ramen, in the Belvedere Square Market, is one of the first to do things right.

Ejji (sounds like and means "edgy") is not purely a Japanese restaurant, however. The owners, Oscar Lee and chef Ten Vong (whose families also own Chocolatea Cafe in Tuscany/Canterbury), are Malaysian and have incorporated Malaysian elements into their short menu of dumplings, skewered meats, and noodle soups. Mr Minx and I were invited to a media tasting in the week before Ejji's opening to get an idea of what their food was all about.

We started out with a sample of their gyoza, stuffed with cabbage, shiitakes, and smoked tofu. The fresh and delicate filling gets punched-up with a dip in a super garlicky sesame/soy sauce. 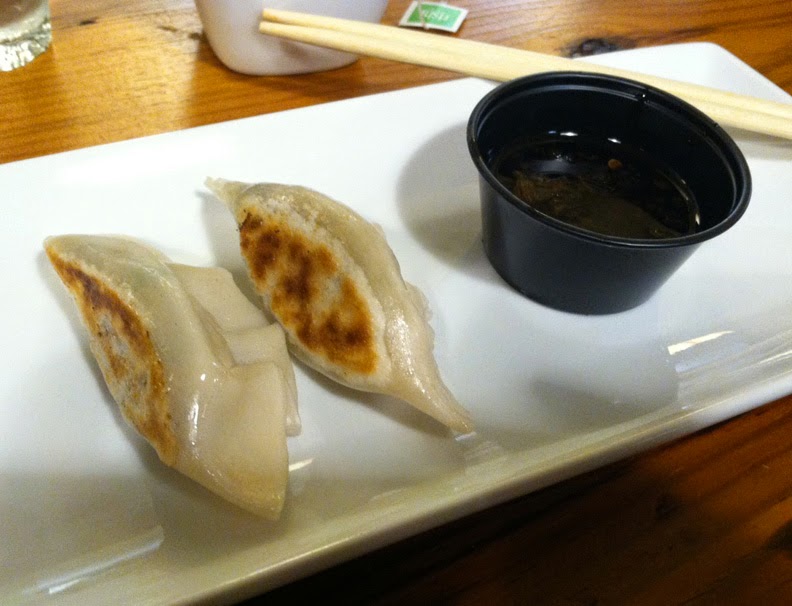 Next, we tasted their pork belly yakitori and both beef and chicken satay. The pork, cooked over traditional Japanese charcoal called binchotan, was pleasantly chewy and nicely seasoned. Shakers of sichimi togarashi (a spicy seasoning blend that includes red chile) were on hand to add a bit of heat to the pork, while the satay had a delicious lime-infused peanut sauce for dipping. The skewers of beef and chicken had been marinated in lemongrass, kaffir lime, ginger, and coconut milk and were flavorful even without the sauce. There were murmurs of dry chicken around the table, but mine was lovely. 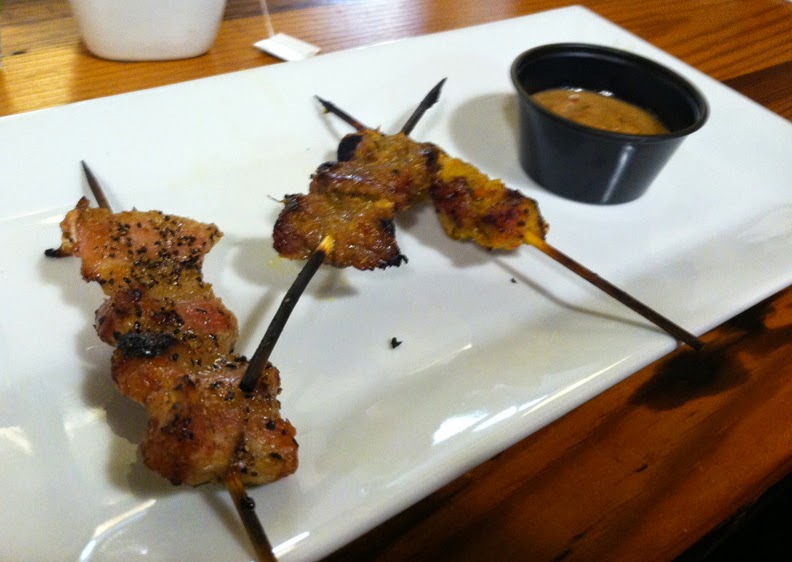 Ejji offers three styles of ramen, which one can mix and match. Choose one broth, one noodle, any of thirteen toppings, and a sauce, to make the dish your very own, or order something from the predetermined menu.  We tasted all of the chef's house-made sauces, including two very spicy sambals in red and green, a puree of scallion and ginger, soy perfumed with yuzu, and a black sesame garlic soy. There are also shishito peppers pickled with fish sauce, which offers a milder heat than the sambals. 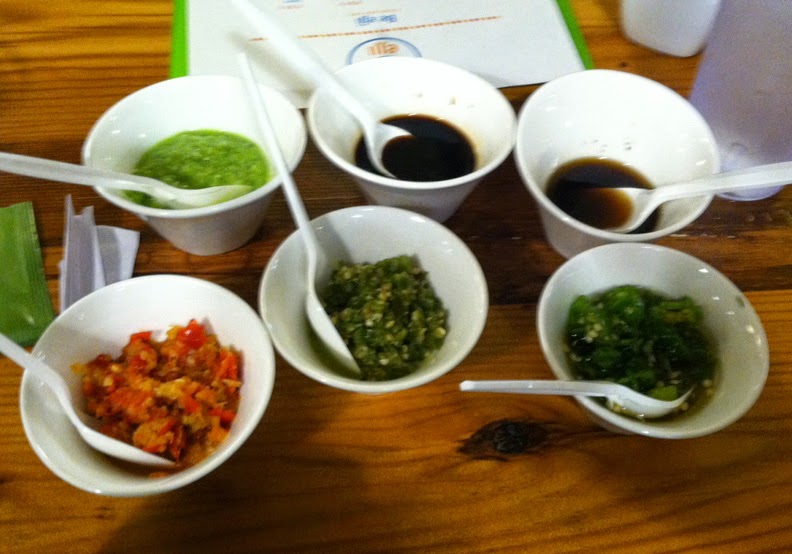 We sampled three styles of ramen. The first was Ejji's vegetarian version of a Hokkaido-style miso ramen. The rich noodle soup is customarily topped with sweet corn, but Ejji uses the corn in the broth itself, instead of pork. To mimic the fatty mouthfeel of pork-based stock, chef Vong uses butter, which works perfectly with corn. Our servings were topped with soft-boiled egg, enoki mushrooms, scallion, and a large piece of bamboo shoot. Of course, this being ramen, the star of the dish was the tangle of chewy, thick, curly ramen noodles. Ejji gets their noodles from Sun, a noodle manufacturer of some reknown based in Hawaii with a branch in New Jersey. (Consumers can buy Sun noodle products at HMart and Lotte.) 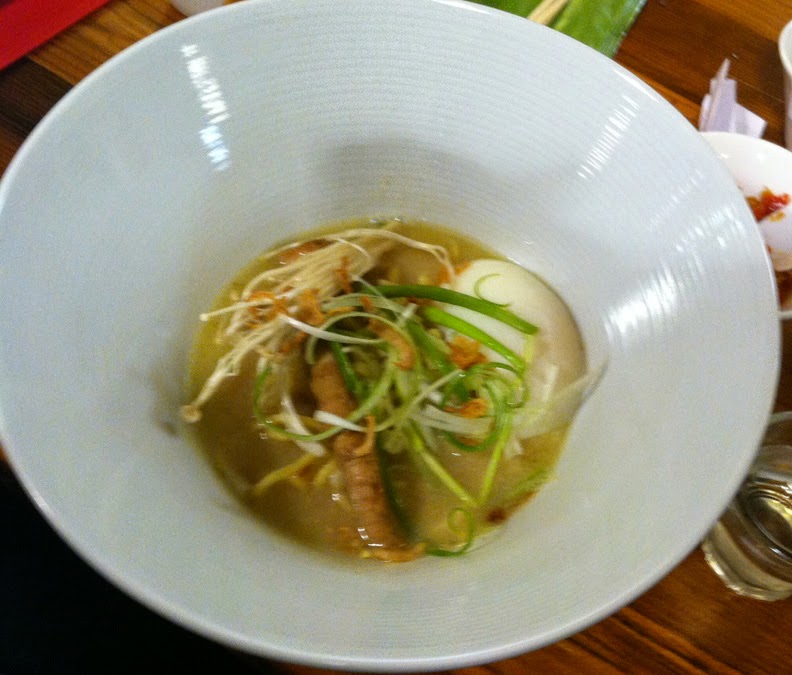 The second bowl of ramen we tried was made with the perhaps more-familiar tonkotsu broth. Making the broth is a two (or more) day process involving cleaning, boiling, rinsing, and more boiling of pork shin bones until they no longer leach out blood and create a nearly opaque milky broth. (Read about making tonkotsu broth at Serious Eats.) The rich stock was then ladled over thin curly ramen noodles and topped with cha siu pork, a miso egg, and slices of melt-in-your-mouth crispy pork belly. 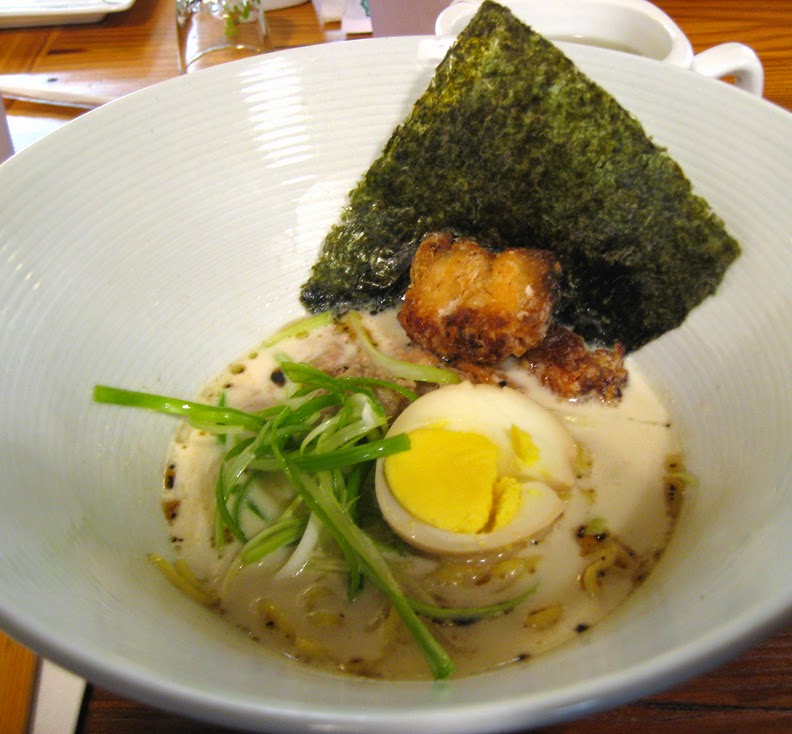 The soups were so good, it was hard to stop eating them. Unfortunately, that meant we didn't have much room left for the final bowl, a laksa. Laksa is a Malaysian favorite, often made with coconut milk and, as with Ejji's version, curry. The broth had a shellfish base (clams and shrimp) and contained slices of clam, a fried shrimp, and spongy bean curd puffs and a sprinkling of katsuobushi (bonito flakes). The thicker curly ramen noodles were used in this dish (but you can order the laksa with more traditional rice noodles). This was the heartiest of the three soups we tasted and a bit on the sweet side due to the coconut milk. A big spoonful of spicy sambal added some brightness, as did a squeeze of the accompanying lime. 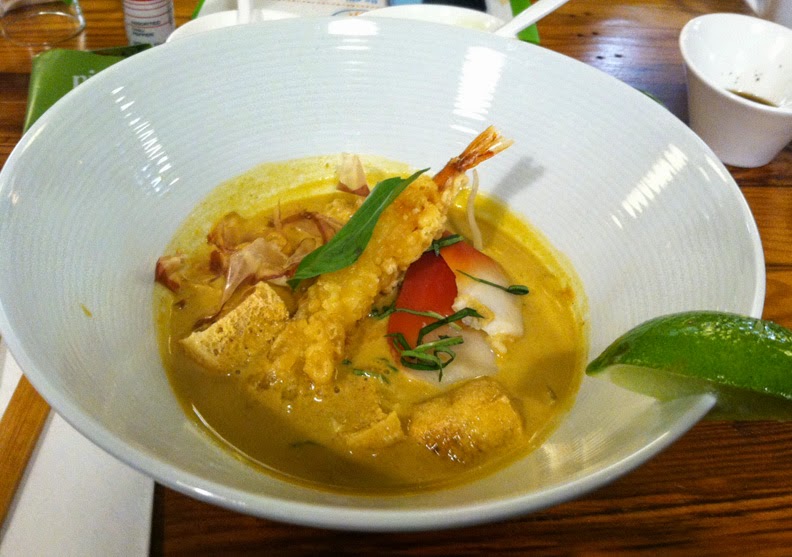 Ejji Ramen has been a long time coming. Lee and Vong had been planning the restaurant for two years, and personally, I think it was worth the wait. I predict the restaurant will be very popular in the cold months to come.