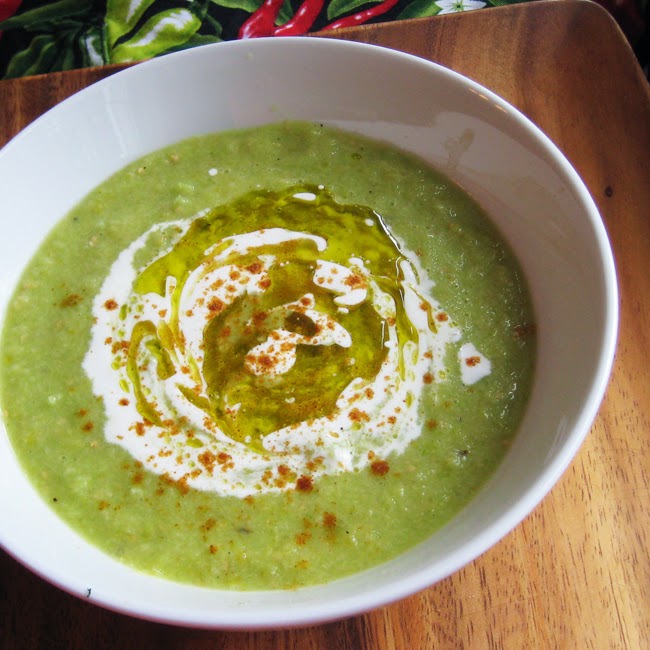 I love gazpacho and can eat it every day in the summer. There are very specific and authentic ways of making this Andalusian dish, and not-so-authentic ones as well. I like all of them. As long as there are cucumbers and peppers of some sort in the mix, I think almost any fruit can be used in place of the tomato. I've made versions with watermelon and strawberries, and have eaten both mangospacho and cantaloupespacho. I've made it both with and without bread, and seasoned with champagne, balsamic, rice, and apple cider vinegars as well as the traditional sherry vinegar (basically I use whatever is in the front of the cupboard). When I got the email from Bon Appetit touting their latest version, made with tomatillos and Greek yogurt, fortuitously received the day we planned to go grocery shopping, I decided we'd be eating it for dinner on the weekend.

Of course I can't follow a recipe to the letter. I'm a tinkerer.

The original had too much Greek yogurt in it for my taste. I don't think gazpacho should be creamy. However, I did have a couple of spoonfuls of yogurt in the fridge, left over from another cooking project, and threw it in. It didn't make much of an impact, but I got to use up something that otherwise might have been wasted. The Bon Appetit recipe also called for a green bell pepper. I'm with Nigella Lawson, green peppers are "an abomination." Instead, I used a yellow pepper, which I roasted first to remove the belch-inducing skin. Roasted poblanos would be good too, I think. And then there was the method. The original recipe calls for tossing all of the ingredients together and allowing them to macerate before pureeing. There's not enough room in my fridge for a bowl full of veggies and soggy bread. I say just bang it all in the blender and put it in the fridge to allow the flavors to develop.

I did, and it was delicious.

Place whole pepper over gas flame on stove or on a grill. Turn regularly, until pepper is charred all over. Place pepper in a bag to steam/cool off. When cool enough to handle, rub off skin. Remove stem and seeds and cut pepper into chunks.

Place roasted pepper, cucumber, and tomatillos in a blender and process until smooth. Add the bread, scallions, and jalapeno, and process again until smooth. Season with the vinegar, lime juice, yogurt, and salt. If your jalapeno wasn't spicy enough, add some hot sauce (we used green Tabasco).

Refrigerate for several hours until cold and to allow flavors to meld.