We've been to Orchard Market & Cafe again recently for a signing of Baltimore Chef's Table so I thought I'd add to our original write-up from 2010.

Does anyone remember Orchard Market & Cafe, Baltimore's "premiere Persian restaurant?" I say "remember," even though the place is still around, because I seldom hear anything about it. Seriously, when was the last time you ate there? I think the one and only time we tried it - at the suggestion of my Mother - was in the early 1990s; the food was very good so I don't know why we never returned.

I thought it was high time for a revisit, especially since Mr Minx had never been.

Orchard Market is a bit difficult to find if one doesn't know where to look. It's down Orchard Tree Lane off Joppa Road, between Mo's Seafood and Gardiner's furniture, not far from Loch Raven Boulevard. Unassuming from the outside, the interior of the restaurant is quite pretty, decorated in soothing shades of cream and dark celadon, with tapestries and replicas of Persian art on the walls, and more art that appears to be for sale. 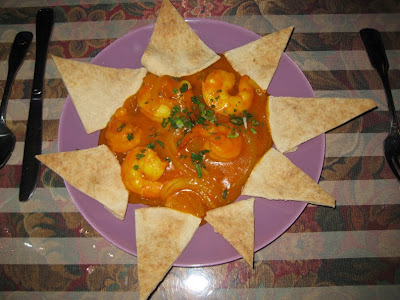 On our first visit, we tried the Mango Shrimp (Jumbo shrimp sauteed with onions and vegetables in a unique mango chutney and garlic sauce). I thought it would be overpoweringly sweet, but it was actually well-balanced. The shrimp was full of iodine flavor (something we very much enjoy, YMMV) and the sauce contained little bits of mango. 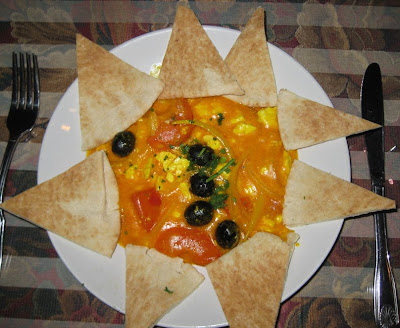 We also had the Sauteed Bulgarian Feta (Pungent Bulgarian Feta melted over farm tomatoes, onions, and black olives), which looked similar to the mango shrimp, except for the olives. But the sauce was tangy, not sweet, and while I'd have liked more feta, it was quite tasty. With a salad, this dish would make a fine lunch. My biggest criticism of these two dishes is that the pita had been toasted, making it somewhat difficult with which to scoop the sauce. 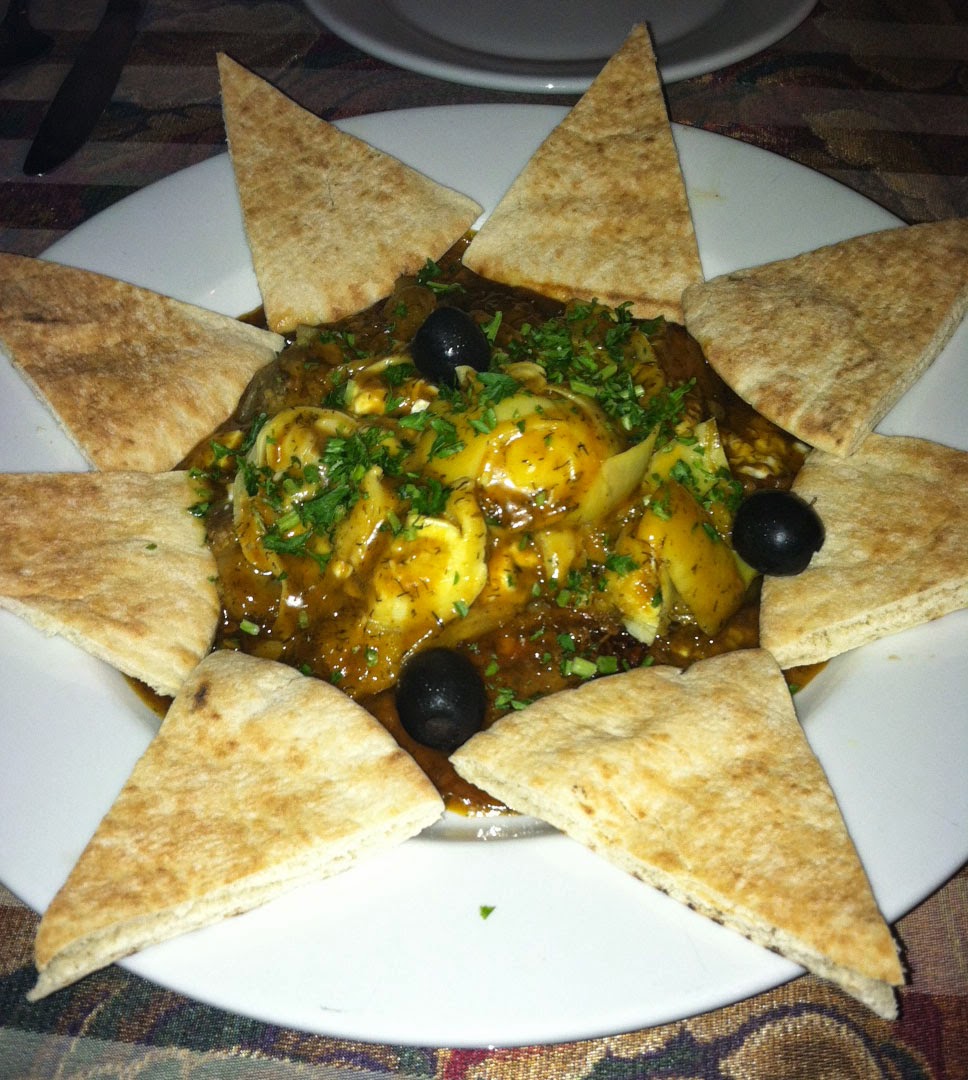 On our second trip, we tried the eggplant and artichoke appetizer. I must admit, when owner Jason Bulkeley emailed me the recipe, I was a bit skeptical. One of the ingredients is honey dijon mustard, which didn't seem particularly Persian to me. But it's delicious! One doesn't notice the mustard at all; what comes through, however, is the lovely tangy-sweet flavor of pomegranate molasses. This is a dish I'm certainly going to cook at home now. Oh, and this time the pita wasn't toasted, which made things much easier. 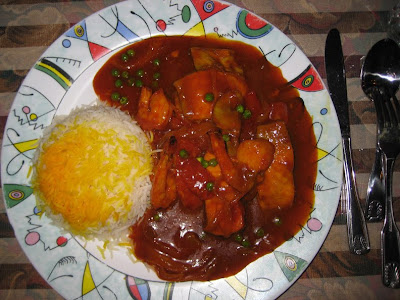 On our first trip, I had the Seafood Advieh, mahi, shrimp, and scallops in a mango and honey advieh sauce. The sauce had an interesting sweet-sour flavor punctuated by cinnamon and rose, but wasn't entirely to my taste. 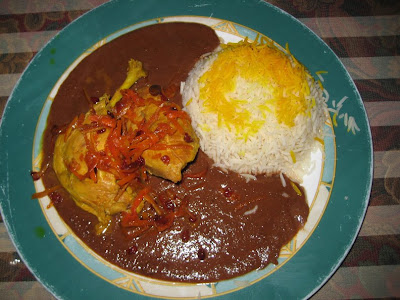 Mr Minx had Duck Fesenjune (orange-poached leg and breast of duck with the classic Persian walnut-pomegranate sauce). I'd had this dish on my first visit in the 90s and remembered it as being quite delicious, but this one was sadly overpowered by the large quantity of grated orange peel atop the otherwise nicely tender duck. 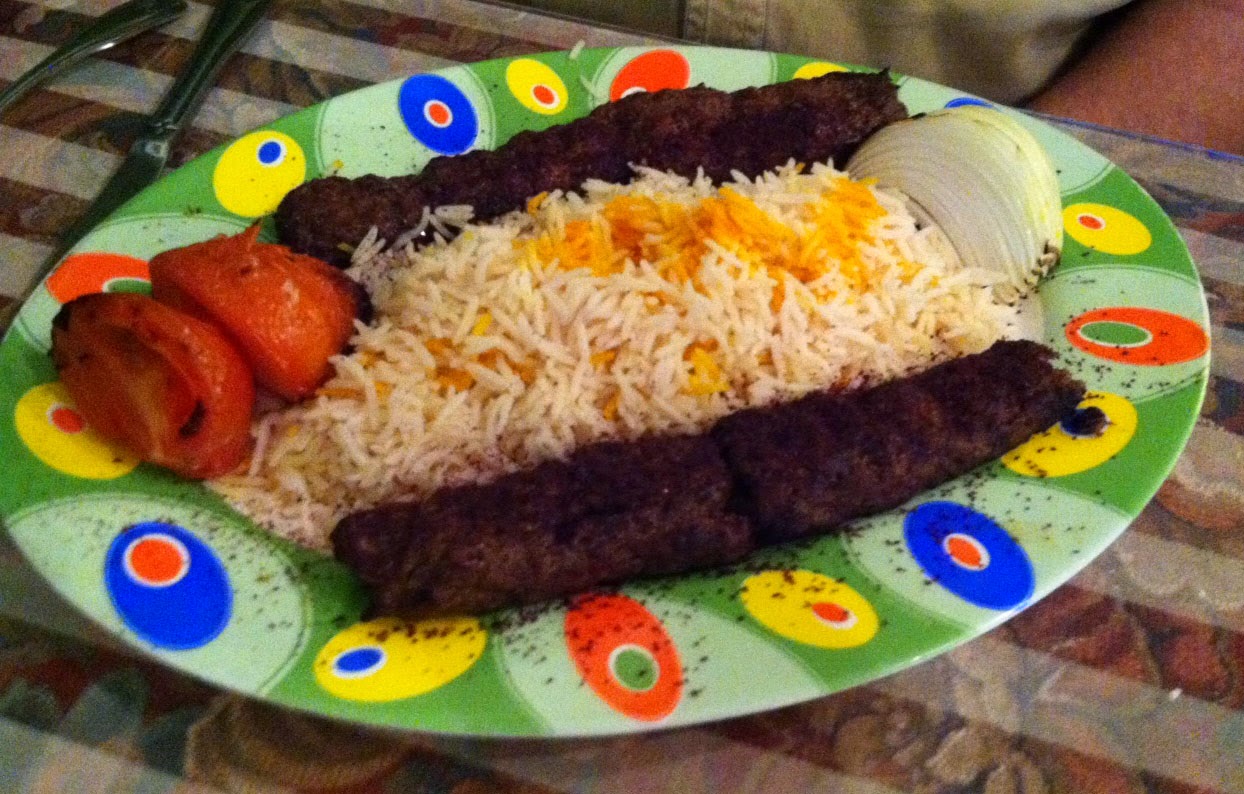 The second time around, we were much more successful with our entrees. Mr Minx had the kubideh, a ground beef kabob. It was moist and juicy and nicely seasoned. 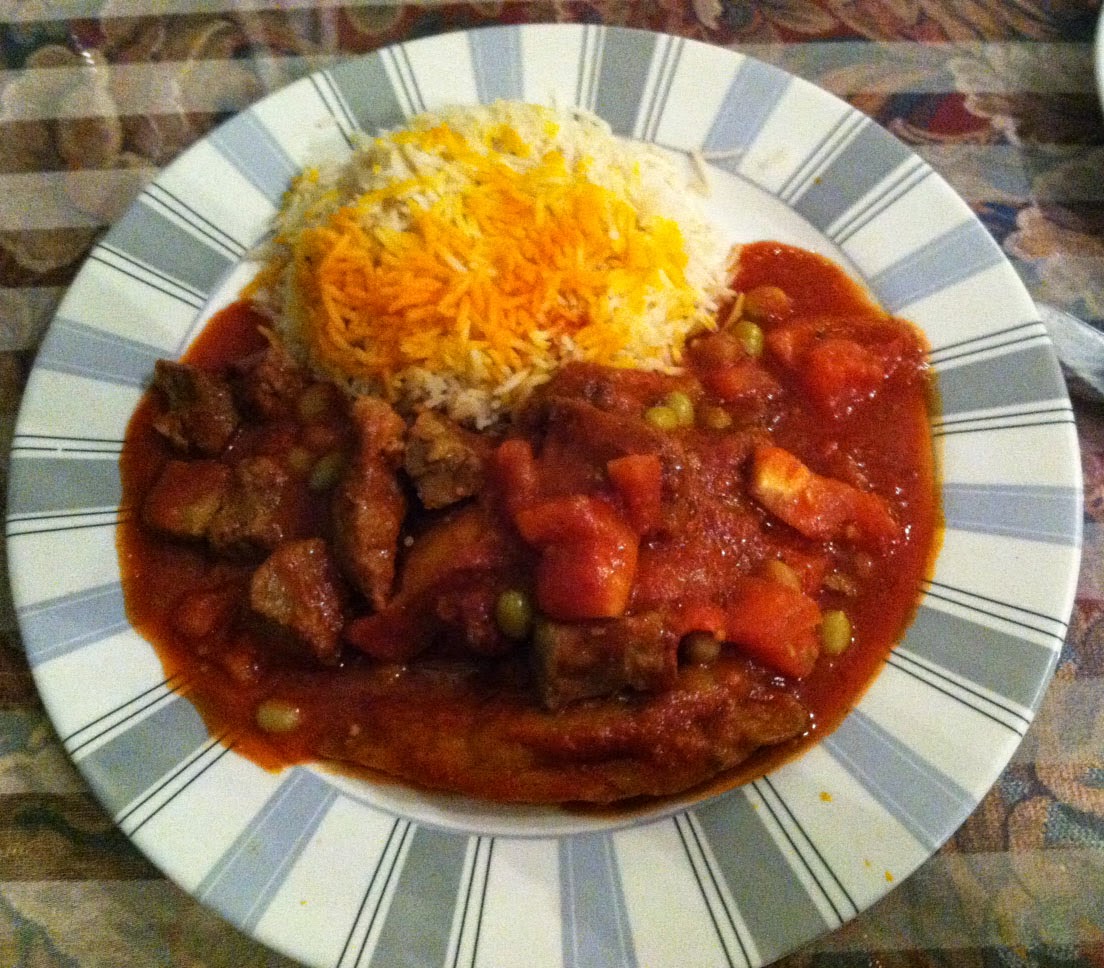 My bademjune was a stew of fork-tender lamb chunks with eggplant in a tangy tomato sauce punctuated with intensely sour pickled grapes. Can't beat the combo of lamb and eggplant!

Orchard Market & Cafe has been around for over 25 years now, and while the shopping center around it is mostly empty, the restaurant is still going strong. Not only do they specialize in fusion Persian food, but they have some pretty terrific live music during the week, including singer-songwriters and  lively Gypsy Jazz. If you've never been there, do give the place a try.