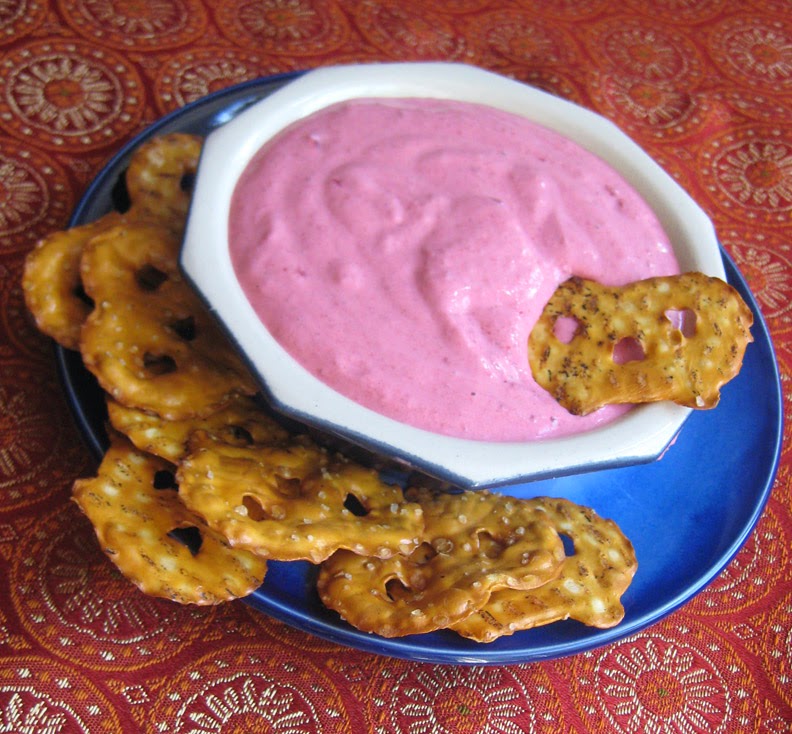 That's a funny name for a dip, isn't it? Pink Sultan? Perhaps a little pompous? But it's a thing--a yogurt and beet concoction that is a typical Turkish mezze. Traditionally made with labne, a yogurt cheese, the dish can be quite thick, like the one we had at Bosphorus earlier this year.

Labne isn't exactly in every supermarket, and I didn't feel like waiting 24 hours to make my own (nor did I have any cheesecloth), so I just used plain, unstrained, Greek yogurt to turn the dish into a dip for crackers and crudites. One thing that can be found in most supermarkets is plain cooked beets. Use the ones found in the produce section, not in jars in the canned goods aisle. Two 1 1/2" - 2" beets should do the trick for 1 cup of yogurt. Season it up with garlic, a bit of lemon juice, and salt, and you have a tasty and different party snack. And it doesn't even really taste like beets.

If you do find labne, or have the patience to make your own, you can still use the same recipe. The labne will be spreadable rather than dippable, so serve it with some fresh pitas rather than crackers or veg.

Combine ingredients in a food processor until well-blended. Serve with pita, crackers, or crudites.