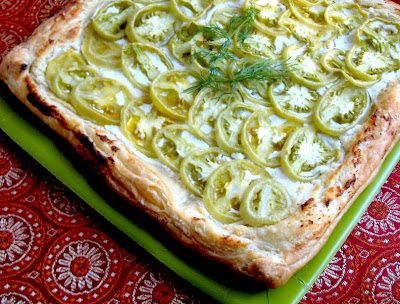 When the first frost of the season hit, we still had a ton of tomatoes on the vine. We picked everything and brought them inside to ripen on the windowsill. Figuring most of them would ripen at the same time, I decided to use a few of them while they were still green.

Several of the tomatoes were plum tomatoes, which are too small in diameter to fry. Well, nothing is too small to fry, I suppose (making them "small fries") but all that breading and frying of small things is too time-consuming for me. Instead, I opted to make a simple tart. And "tart" was the right word for it, as I used tangy goat cheese as well as the under-ripe tomatoes. A sprinkle of sugar on the top before baking bumped up the sweetness level, while still leaving the tart on the, er, tart side.

Combine goat cheese and herbs. Stir in enough cream to create a thick paste. Season with salt and pepper to taste.

Place pastry square on Silpat- or parchment-lined baking sheet. Fold over each of the four sides about 1/2" inch to form a crust. Fill the interior with the goat cheese mixture, spreading evenly. Shingle on tomato slices. Sprinkle with sugar. Bake for 25-30 minutes, until tomatoes have dried out and crust is golden.

Serves 4-6 as an appetizer or side.