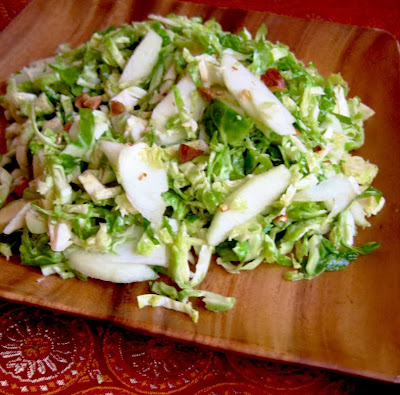 I usually look forward to Thanksgiving, until I remember that I cook most of the food for the holiday. Mr Minx and I celebrate with our combined families at his brother's house. Brother-in-law makes the turkey and stuffing, and my brother usually contributes pies to the occasion. But all of the side dishes--cranberry sauce (no I won't buy canned), corn pudding, Brussels sprouts, green been casserole, mashed potatoes, sweet potato casserole--fall to hubby and me.

I usually spend the day before Thanksgiving in the kitchen, prepping everything. All we really have to do on Thanksgiving day is pop casseroles into the oven (or in the case of the corn pudding, the microwave). Except with the Brussels sprouts, which must be cooked a la minute. Typically, we separate the leaves from the sprouts, give them a rinse, steam them for a few minutes in the water that clings to the leaves after rinsing, season and serve. While it's fairly easy, it takes up a burner on the stove and even though they're cooked at the very last minute, the sprouts are cold by the time people get around to eating. Then I found a couple recipes for shaved raw Brussels sprouts salads and thought it could be the answer. It's not much more work on the day before, but on the day of, all I need to do is to remove the cover from the bowl and put it on the table.

It tastes pretty good too, although, like kale salad, raw Brussels sprouts give the jaws a workout.

Cut off the stem ends of the sprouts and remove the outer dark green leaves. Cut each sprout in half and remove the core. Slice the rest very thinly, putting slices in a large bowl. Alternately, you can slice them with the slicing or grating blade on your food processor, or with a mandoline.

Peel and core the apple and slice it very thinly. Toss with half the lemon juice.

Place the butter in a sauce pan and cook over medium heat until browned and nutty smelling. Pour it into a ramekin or bowl to stop the cooking.

In another bowl, whisk together the vinegar, remaining lemon juice, agave, and salt. Slowly add the browned butter while whisking to combine. Then add the vegetable oil, whisking until emulsified.

Toss the dressing with the shredded sprouts. Add the apples to the bowl and toss again. Add the nuts and toss yet again. Allow the salad to sit for half an hour or so.