Finally the show starts for real - last week's episode didn't count, as far as I'm concerned - and we have a mere fifteen competitors. That means the show can be over in what - fourteen more episodes, if there's a two-part, three-contestant finale? That's not so bad. Much better than last season's interminably long 18-episode arc.

So The Fifteen congregate in the new Top Chef Seattle kitchen, this year painted a fetching Healthy Choice green. Before long, Padma comes in with three familiar faces: CJ Jacobsen from season 3; Josie Smith-Malave from season 2; and Stefan Richter, from season 5. Cheftestant Chrissy is quick to point out that Stefan "looks like a thumb," which is entirely true.The three old-timers are judging this Quickfire, which involves creating something delicious from a big pile of Pacific Northwest shellfish, in a mere 20 minutes. 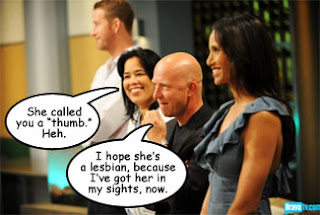 Why these particular three old-timers? They're not Seattle-ites, and they seem like strange bedfellows (although Josie is a lesbian, and we know Stefan enjoys a challenge). But before I can ponder this too seriously, Padma tells the cheftestants to situate themselves into groups of three and come up to the table to grab some critters. There's a scrum for the geoducks, but as there are only two, not everyone gets to play with the giant penis-like clams. Plenty more other goodies on the table though, kids. 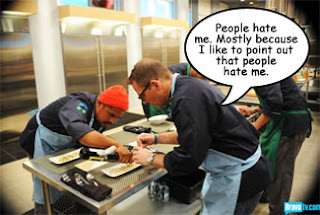 There's some chaos involved as far as team interaction is concerned. The blue team of Kuniko, John, and Sheldon seems to know what they're doing. Meanwhile, the team in orange - the only team comprised of three women - are babbling like a bunch of turkeys who know that Thanksgiving is just around the corner. Or three simple-minded Fox News bubbleheads talking over each other and not really saying anything. Carla Pellegrino is the most annoying and shrill of the three (actually, the other two seem neither annoying nor shrill). She tells us that she likes to look good in the kitchen. Personally, I'd like to see her wear a hair net over that unnecessary flop of greasy bangs, but how important is hygiene in a professional kitchen anyway? (Very.) She says she wants to be "a James Beard" (we can assume the "winner" part) but have a nice ass too. And maybe even be one. An ass, that is. 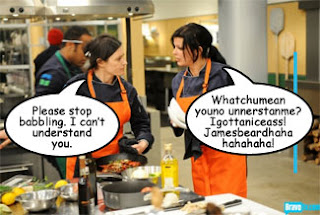 Twenty minutes goes quickly, thankfully, and soon the dishes have been presented for judgement. Josie, Stefan, and CJ dutifully taste everything and make comments. Stefan's are mostly negative, but we know he's the best chef in the world, right? The Yellow Team's soup of razor clams gets a big thumb's down from the judges, but the lovely sashimi of geoduck from the Blue Team is the winner. Because immunity is on the line, the three have to draw knives to see which of them gets it. This seems really stingy to me, but whatever. John Tesar - the most hated chef in Dallas, as he's bound to remind us endlessly this season - is the winner, and goes off to gloat.

So far so good. And then the twist happens. Not only are Josie, CJ, and Stefan Quickfire judges, but they are also cheftestants. Padma hands them their Top Chef coats and they join the rest of the group, amid hubbub. It's not fair! These three already know what it's like to be on Top Chef! and blah blah murmur murmur. They're pissed off, and I'm pissed off too. Three more cheftestants means another three weeks of competition, bringing the season's total back up to eighteen. FML. 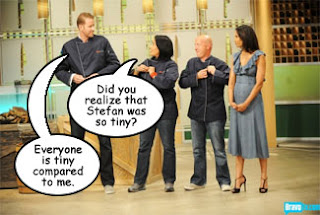 But let's swallow the bile and go on, shall we?

For the Elimination Challenge, the chefs get to cook for Seattle restaurateur extraordinaire, Tom Douglas. They will get 47 minutes to cook. Why such a weird amount of time? Well, they'll be cooking in the kitchen atop the Space Needle, and it takes 47 minutes for that thing to make one revolution. "There's a kitchen up there?" you ask. Yes, a whole restaurant, called Sky City. And the prices are sky high. I suppose they figure that if you've spent $19 to get up there to begin with, you might not be averse to forking over more money for dinner. Maybe the change in altitude will make you light-headed enough to pay $38 for pear and brie agnolotti. Or $56 for lamb chops. And if you think, "oh, I can just make a meal out of a couple of appetizers, or an $11 salad and $9 soup," you're wrong. The minimum charge per person is $35 - it says so right on the menu.

But before the chefs can get cooking, they have to "shop" in the Top Chef pantry, which is loaded with fish and more fish. Team Old Timer decides to do something different and take quail, but every other group grabs fish and spot prawns.

The next day, two teams of chefs at a time prepare their dishes. (There's apparently not enough room for 18 cooks to work at once.) Meanwhile, Padma, Tom, Tom Douglas, Emeril, and Gail Simmons find their seats in the dining room and await the impending 6-course fishtravaganza.

Team Most Hated Chef in Dallas and Team Hen Party go first, and both get very favorable comments about their dishes. After serving the judges, Carla flounces into the kitchen to clean up her station and immediately plunges her hand into her open knife bag, cutting herself. Medics are on hand, and unfortunately, she's not injured badly enough to have to leave the competition. 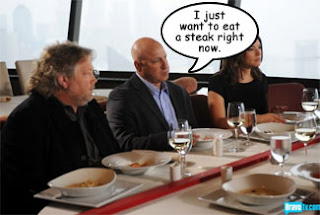 The rest of the judging goes similarly well, as most of the dishes are much the same. Except for one, all use fish, most use spot prawns. Team Old Timers, the one oddball in the bunch, overcooks their quail. Or, rather, Stefan overcooks their quail. Jeffrey on the Gray Team also overcooks his fish, but other than that, there doesn't seem to be any real highs or lows to the meal. 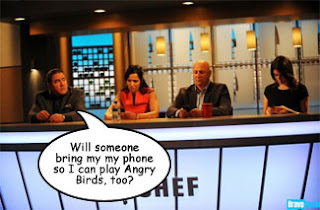 Back on dry land, Padma calls the Blue Team in to see the judges. They are the winners (again) and because Kuniko cooked the best part of the dish - the chile oil poached cod - she's given the win. The Gray Team and Team Old Timer are brought in front of the judges next and taken to task. Stefan and Jeffrey are definitely on the chopping block, and it really looks like smug Stefan will be going home in the first episode. Which would be a shame, because he's bound to cause some friction within the group, hopefully making for interesting viewing. Apparently, the judges feel the same way, because they send Jeffrey packing instead.

So...what did you think? Are you ready for more?

Next week: is Thanksgiving. No recap on Turkey day, but hopefully on Friday the 23rd.