Mr Minx and I were invited to a soft opening for the new Gordon Biersch in Harbor East. We're both big fans of German-style lagers, so were eager not only to taste the food, but also to sample each of their beverage offerings. Well, not *each* of them - in addition to the plethora of brews available, there are several specialty drinks, infused martinis and the like. The best way to do that seemed to be to try their beer sampler, which included short pours of their Golden Export, Hefeweizen, Czech Pilsner, Marzen, and Schwarzbier brews. I really enjoyed the somewhat oddball flavors of banana and clove in the Hefeweizen. So wrong, but yet so right. We also sampled a pomegranate martini, which was a little too heavy on the orange liqueur and didn't have all that much pomegranate flavor. The place specializes in beers, so it's probably best to stick with them.

Because the dinner happened during a service training, I can't really comment on the efficiency of the staff or anything like that, so I'll just jump into the food. We were served our choice of an appetizer to share, two salads (or soups), two entrees, and a shared dessert. The menu offered several burgers, most of which were huge 10oz behemoths. We wanted to try them but neither of us wanted to eat quite that much beef, so we chose instead the kobe slider appetizer. The little burgers were nicely beefy morsels, served at a temperature hovering around medium well. The buns were toasted, which I don't personally care for, but YMMV. My favorite part of the dish was the pile of crispy, thin-cut, onion rings in the center. More, please. 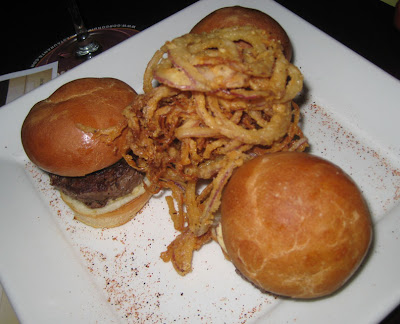 We then scarfed up a Caesar and an iceberg wedge salad. His Caesar had just the right proportion of garlicky dressing and cheese to lettuce. Mine was cold and refreshing, with a simple bleu cheese dressing and a generous portion of bacon bits. Honestly, after eating most of my salad and the sliders, I was already full but we still had two more courses coming.
Mr Minx had the pecan-crusted cedar plank salmon, which came with a cold grain salad with cucumbers and a pile of very lightly cooked vegetables. The salmon was maybe a touch overcooked, but the flavors were all really nice. 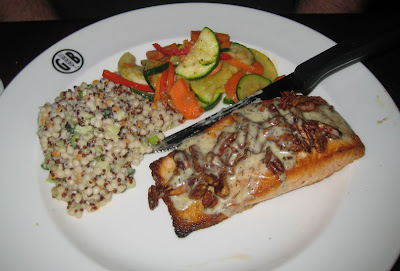 I had originally wanted to try the restaurant's tacos, which I had heard good things about, but they had already 86-ed those. Instead, I went for the Korean BBQ pork chop, which was served with mashed potatoes, shiitake mushrooms, and a cucumber salad. While the flavors in the dish spoke nothing of Korean bbq, the meaty chop was very tender and had a nice bit of grill flavor. The accompanying "lime-infused soy butter sauce" tasted of coconut to me and didn't really work with the chop (it's probably fabulous with the very similar mahi-mahi dish on the menu), but I did enjoy the creamy potatoes. 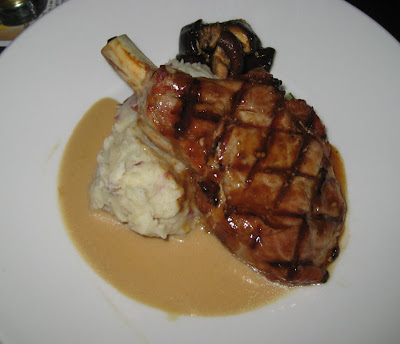 Dessert was pot luck - we had no choice in the matter. The chef's whim for our table was the warm apple bread pudding with pecans, whiskey sauce, and vanilla ice cream. I found the pudding part to be far too soft and squishy for my personal taste, but the flavor was nice. I really enjoyed the super-toasty pecans. 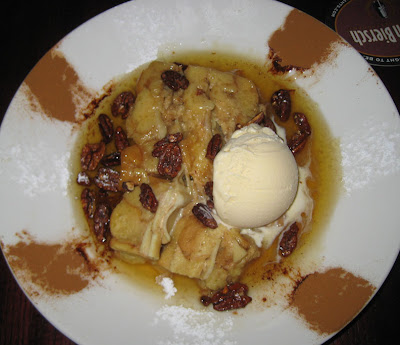 So...I must say that it's really hard to judge a place before it opens and has had all of the kinks ironed out. The food, however, was pretty good, well-prepared and flavorful. Seasoning was spot on. And of course the beer was nicely done, too. It's a fine place for folks who are in Harbor East but don't necessarily want to eat upscale or fancy ethnic food (like Charleston, Cinghiale, Lebanese Taverna, Pabu), or for large-ish parties who are undecided (one wants a burger, one wants three courses). I think the Harbor East location of Gordon Biersch will be a success.