Pierpoint is one of those restaurants that have been around seemingly forever, yet I had never found a reason to go. Recently, I found myself in possession of a Restaurant.com gift certificate worth $25 toward a meal, and it seemed like a good time to use it.

Parts of our meal were very good. The smoked crab cake, for example, that came with my "Balto Box" appetizer. It was my idea of a perfect crab cake. The smoked flavor was so subtle that I didn't even notice it, but the texture - for me the texture of a crab cake is the most important factor - the texture was ideal: crisp on the outside, soft and moist inside, with noticeable chunks of meat that were not that bogus "jumbo lump" crap that's most likely not even blue crab, certainly not local blue, and little filler. And the spinach accompaniment to my entrée was very nice.

But there were problems.

I started off the meal with the Baltimore Bento because I thought it was a very fun idea. A bento box is a Japanese container divided into small sections in which various tidbits of food are arranged. The Bento at Pierpoint made me laugh, as it was large enough to hold an entire meal. Instead, it contained two large fried oysters, one half dollar-sized smoked crab cake, two half dollar-sized coddies, and two of the tiniest clams I have ever seen, prepared casino-style, plus a small ramekin of tartar sauce. After putting it in front of me, our server dashed off to retrieve another ramekin of remoulade that the chef had neglected to put into the box. (Surely not because it wouldn't have fit.) 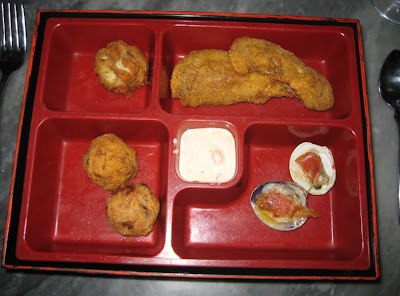 As an artist, I noticed the negative space within the composition more than I noticed the occupied space. And it bothered me. Not that I wanted more seafood (ok, for $17, there could have been bigger clams, or more of them); I was just rather surprised that something borrowed from a culture that prizes order and beauty was so under-utilized. A child's lunchtime bento box might have been a more appropriate size were the dish to merely contain the seafood and sauce. However, I think it would be a nice touch to use up some of the extra space in the box with some lightly dressed greens, something with a bit of acid - even a lemon wedge! - to balance the palate after eating fried after fried after fried.

That said, everything tasted great, particularly the crabcake. The brininess of the clams was lovely as well, and I do wish they had been bigger. 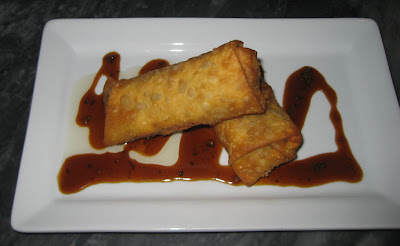 Mr Minx ordered the NY duck egg rolls with Longolian BBQ sauce (a cute riff on owner Nancy Longo's last name). We had both pictured slender spring rolls stuffed with cabbage and duck, but what he got was two giant American-sized egg rolls that were quite a lot to eat, particularly as a starter. Our server had raved about the BBQ sauce, but to us it tasted like a thickened version of the sauce typically used for pan fried dumplings in Chinese restaurants - soy, sesame oil, something sweet. It was all good, but it was lacking finesse. 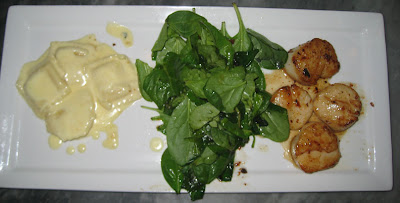 On to the entrées. I had been craving scallops for weeks now and was eager to dig into my diver scallops. Unfortunately, when I read "diver" scallops, I still picture the teacup-sized beasts that I was served at the Joy America Café sometime in the mid-90s. What I received at Pierpoint was four scallops, each about 1.5 inches across - for $29. They were unevenly cooked - some bites were chewy, some bites were tender - and they were quite salty. The scallops were served, rather incongruously, with small cheese ravioli that were coated in a kind of Alfredo sauce. Considering how much Frank Sinatra we were subjected to over the sound system, I wouldn't have expected such a verboten cheese and shellfish combination. But then, Pierpoint isn't an Italian restaurant. Between these two elements was a large pile of baby spinach that seemed to have been barely tossed with a warm sauce. I loved that some of the spinach was raw, some was cooked. I think it was my favorite thing on the plate. 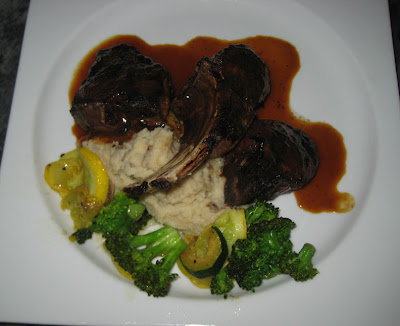 Mr Minx ordered his lamb chops medium. His first bite of each of the three double chops was indeed medium, but the rest of the meat was either rare or completely raw. A shame, because they had a really nice sear on the outside, and the accompanying sauce, subtly flavored with cumin, was lovely. His mashed potatoes had an interesting blend of spices (we detected none of the promised saffron), but were cold. And yes, we did lie when our server asked if everything was ok. It wasn't. But we took the chops in a doggie bag, figuring it would be easiest to repair at home.

We decided to eat dessert elsewhere.

Pierpoint does many things well, but other things just not well enough.