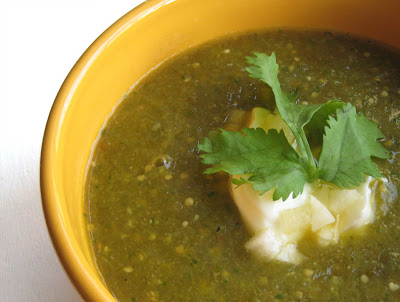 While lots of recipes from Top Chef seem like they might be delicious, not all of them are do-able at home. Sometimes the chef's directions aren't particularly clear. Other times the recipes are simply too complicated. But there's nothing complicated at all about Edward Lee's tomatillo gazpacho, which he prepared for the Quinceanera in episode 3 of Top Chef Texas.

I'm a big fan of gazpacho - toss a bunch of raw veg in the blender and end up with a flavorful, nutritious soup. Doesn't get much easier than that. Ed's recipe is a bit more involved in that he cooks most of the vegetables before puréeing them and mixing them with cucumber purée. He included his poblano peppers in the cook pot, but I thought they might have more flavor if roasted first. I also tossed out his watermelon, jicama, and pork rind garnish because I didn't want to buy a bunch of extra stuff. I already had a daikon in the fridge and thought if I pickled it, it would cover the juicy, sweet, and crunchy bases covered by his original garnishes. I also didn't bother to strain the soup; after all, I wasn't being judged on its appearance. I thought it was pretty nonetheless, as pretty as something Army green can ever be. And it tasted good, too.

Place tomatillos, onions, garlic, jalapenos, and vegetable stock into a large pot. Bring to a boil over high heat, then turn heat down to medium. Cook until vegetables are soft, about 15 minutes. Remove from heat and allow to come to room temperature.

When veg are cool, puree in a blender. Pour puree into a large bowl.

Place cucumbers in the blender with a handful of cilantro and puree. Stir into tomatillo puree in bowl. Cover bowl and refrigerate until cold.

Serve in bowls. Garnish with dollop of sour cream, spoonful of daikon, and a bit of cilantro.

Garnish directions: place daikon or radishes, vinegar, agave, and pinch of salt in a small bowl. Cover and refrigerate for an hour or more so the vegetable pickles.