Thank you for opening a branch near the University of Maryland Baltimore's crime-riddled 'hood. Perhaps Starbucks and Au Bon Pain aren't so thrilled that you've arrived, but judging by the massive lunchtime crowds, I think the rest of the campus is delighted.

Your breakfast sandwiches are quite tasty and filling. I particularly enjoyed the jalapeno bagel with egg, white cheddar, and ham. It was nicely greasy (unlike the arid sandwiches from Au Bon Pain) and kept me sated until late in the afternoon.

Can't really fault your baked goods, either. The family-sized loaf of rye bread stayed fresh for most of a week and made great sandwiches. Your baguettes are nicely crusty on the outside and springy on the inside. And your pastries are pretty good. Except for that "Cobblestone" thing, which just seemed like an over-baked, muffin-shaped apple fritter to me.

On to the rest of your offerings.

Why do you call your "Thai chopped chicken salad" by that name? There's nothing even remotely Thai about it. Edamame is a Japanese snack, and wontons are Chinese. Perhaps the "Thai cashews" (or the scattering of vaguely nutty-flavored dust in my particular salad) are what earned the salad its name. Or not. And is it really necessary to include both cashews and a peanut sauce in the same dish? Not that I got any of the promised peanut sauce, either, but I was curious. Your Thai (there's that word again) chili (chili or chile?) vinaigrette does indeed pack a bit of heat, but I didn't enjoy the perfume-and-lime-juice flavor. At least the chicken was tender.

A proper Greek salad has tomato, cucumbers, onions, peppers, feta, and olives. It does not have lettuce. Crappy American versions have lettuce. The one "Greek" salad I ate at your establishment was firmly in the "crappy American version" category. While it is odd that cucumbers are not a regular component of the salad, it is odder still that you would use hard, flavorless, and nearly white winter tomatoes when sweet ripe grape tomatoes are available all year 'round. And would it hurt for you to use more than half a teaspoon of cheese? That said, the chunk of baguette on the side was really good. 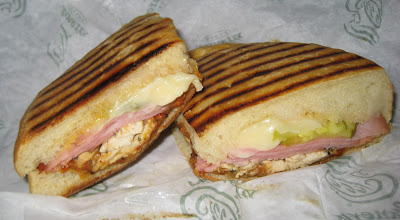 Out of the sandwiches I tried, your riff on a Cubano was pretty good, despite your substitution of chicken for the customary roast pork. The bread was crisped nicely, and I liked the cheesiness, but the sun dried tomato mustard didn't work for me. There was just something about it that threw the whole thing off.

The Mediterranean Veggie, with Peppadew peppers, feta, cucumber, lettuce, tomato, onions, and cilantro hummus on tomato basil bread, on the other hand, was delicious. The peppadews had a nice sweet-tangy thing going, but they also made the sandwich a little sloppy. A firmer bread might work a little better. As for the name...I suppose "tomato" "basil" and "feta" say "Mediterranean" to a lot of people, but the main flavor component - the Peppadew pepper - is from South Africa. Just thought you should know.

Overall, I'm pretty pleased that you've come to this neighborhood, mostly because I can buy a loaf of bread on the way home from work. And a good breakfast sandwich when I know I might be too busy to stop for lunch later in the day.