Mentally going through the contents of our small but over-stuffed freezer (Lap cheong, Mexican chorizo, chicken apple sausage, chicken stock, linguica, gumbo, precooked Italian sausage, salmon filet, ice cream, hot dogs, some weird Asian pork sausage, andouille...yes, I realize that is probably an abnormal amount of sausage to have at one time) I realized we had about a pound of ground lamb. At first I thought I'd make a meatloaf (that's a lie...my first thought was merguez, which of course is a type of sausage), but then I realized that chili would be a lot easier. And for some reason, "ground lamb" is now synonymous with "Moroccan" cuisine in my brain, so I wanted to make sure the chili had a nice North African touch. That was easy enough to achieve with some harissa and cinnamon.

I like to serve cornbread with my chili, and had recently seen a recipe for pumpkin cornbread on Photograzing. The recipe called for half a cup of brown sugar, plus molasses and spices, which I thought would make the dish more like a quickbread than a good accompaniment for a savory dish, so I cut back on the sugar and omitted the rest. The result was rather dry and crumbly, so I'm thinking the molasses helped a bit with the moisture content. It tasted fine, however, crumbled into the chili, which was pretty darn good. 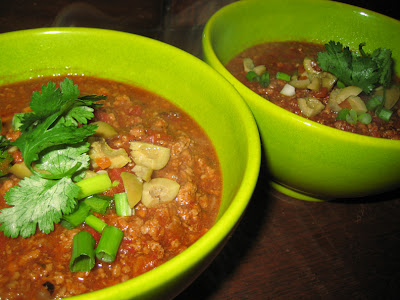 Brown lamb in a dutch oven over medium-high heat, using a wooden spoon to break it into bits. When meat is cooked through and browned, remove to a bowl. Discard any excessive fat left in the pot, leaving behind about a tablespoon or so. Add onions and season with a pinch of salt. Cook over medium heat until onions turn translucent; return meat to pot. Stir in next six ingredients, cooking until the mixture becomes fragrant. Add tomatoes, red pepper, tomato paste, and stock. Bring mixture to a boil, then reduce heat to low and simmer for about an hour. At that point, raise the heat and reduce the liquid until it is no longer soupy. Taste for seasoning and add salt and honey.

Ladle into bowls and garnish with chopped olives, scallions, and cilantro. Serve with pumpkin cornbread. 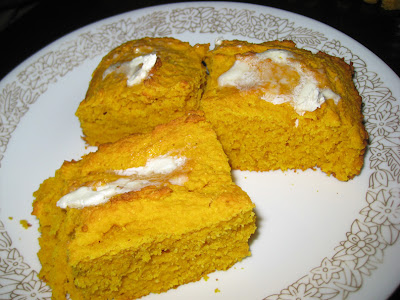 Preheat the oven to 400 degrees. Grease an 8" square pan.
In a large bowl, whisk together the flour, baking powder, salt, brown sugar, and cornmeal. Make a well in the center of the flour mixture and add the eggs, pumpkin, and oil. Stir until just combined. Pour batter into prepared pan, smoothing the top. Bake 25-30 minutes or until toothpick inserted in the center comes out clean.
Posted by theminx