On my birthday, Mr Minx and I had a lovely dinner at Langermann's in Canton. We had a Groupon (damn those things are addictive) and it was half-price wine night - how could it get any better?

With nice ambiance, great service, and good solid food, all of which Langermann's had in spades.

We started out with warm-from-the-oven cornbread that was very tender and somewhat sweet. As we dug in, our appetizers arrived. Mr Minx went for the Carolina gumbo, which was quite spicy. It didn't have quite the depth of flavor that I like in my gumbos, but it was good and hearty, and somehow the brown rice served with it wasn't overtly crunchy (a big plus). 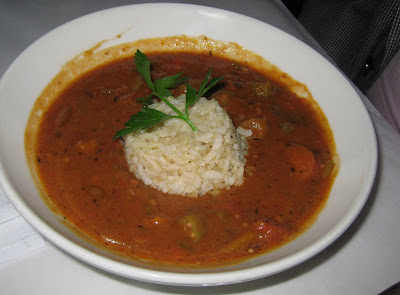 I was torn between the Low Country Louie, and the whole belly clams; my mind was made up for me when our waitress announced that they were out of clams. 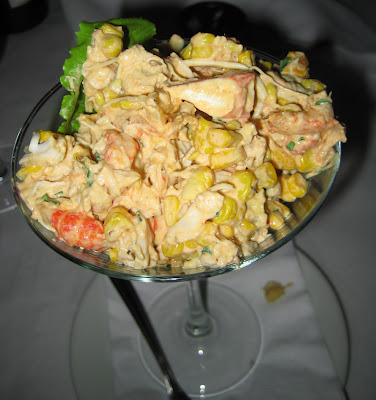 We were both feeling rather pedestrian as far as entrées were concerned. Mr Minx chose the NY Strip with sautéed spinach and potato croquettes. I thought the steak was nicely seasoned and had a nice beefy flavor, but the sides were on the bland side. 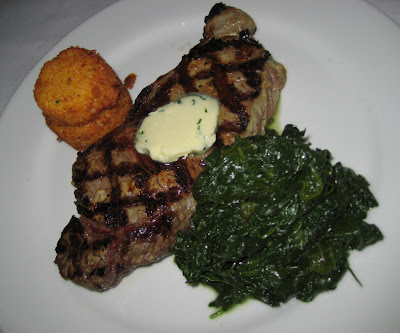 My crab cakes, billed as "jumbo lump" on the menu, may have contained a lump or two, but were otherwise full of much smaller pieces of crab and a bit of filler. I didn't find this objectionable, however, and thought they had a nice flavor, as did the corn and black-eyed pea succotash. The crispy shreds of potato atop the dish were delicious, but their size and shape made eating rather awkward. 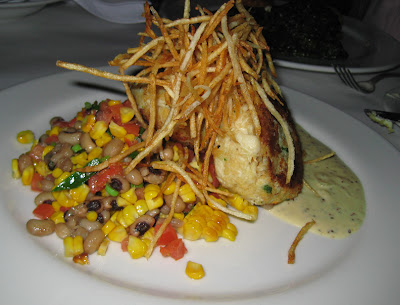 Although we had pumpkin cupcakes waiting for us at home, we were tempted by a huge slice of pumpkin cheesecake with a thick and buttery graham cracker crust. It was a perfectly lovely example of the genre - neither heavy nor light, nicely spiced, and filled with autumnal flavors. I'm glad we indulged.

Overall, I enjoyed our meal. The service was prompt and extremely friendly, the ambiance - despite the large room with very high ceilings - was cozy (we sat near the fireplace), and the food was pretty solid. If I find myself in the Canton area with a hankering for a nice seafood cocktail, I'd definitely make a return visit. Maybe they'll have the clams next time....